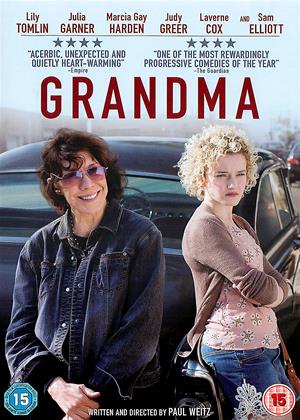 Funny, feelgood movie with some depth - Grandma review by PS

This is essentially a road movie with chapters. It's construction is really beautiful. It all takes place over a single day. As we travel through the day with Lily Tomlin's eccentric and irascible grandma figure, ("i don't have an anger problem, I have a problem with assholes") and her grandaughter, we gradually learn more about her and her history, and explore her relationship to her grandaughter and to her daughter. What I love about this movie is that none of the three main characters are static, they and their relationship change as the movie progresses. At one point the mother says to Elle, "you were a terrible mother" and she answers "I'll try to be a better grandma" and we see this happening. As a grandma myself, I love this Idea of the grandparent relationship being an opportunity to "do it different next time". Lily Tomlin won a golden globe, and other awards for her performance. Her comic timing, as always, is superb and she also manages to give depth and dignity to her character. The chemistry between her and Julia Garner, who plays Sage, her granddaughter is excellent. It's a very funny movie that also has some depth.

Excellent - Grandma review by BE

Hugely enjoyable comedy from director Paul Weitz with Lily Tomlin playing the centre role to perfection. Not your usual 'try for a laugh a minute' American trash comedy but a well scripted, thought out movie with a good storyline. More of these please.

Just About Gets Away With It - Grandma review by Mehitabel

I'm not fan of vehicle films in general. Very, very few actors, however accomplished, attractive, charming, charismatic or funny, can be the core of every single scene in a movie without becoming tedious, IMO. But Lily Tomlin manages it in this one - just. She manages it because she changes. To start with, she is gratuitously unpleasant; I nearly switched off fifteen minutes in, assuming that the entire movie would be Lily T being nasty, for Gosh!! effect. But no : It gets more fluid and interesting. As Elle, the Grandma of the title, she shows that she can absorb the effect she is having on others, and adapt. And it makes absorbing viewing.

The film, which revolves around a teen pregnancy (although that's really just the trigger for Grandma to be Grandma) didn't have the ending I feared. In fact, the end was quite brave - and refreshing.

Lily T gets good support from Julia Garner as the knocked-up granddaughter, Sage. I was impressed by her willingness to take a back seat; there was no Up and Coming preening or mugging. Marcia Gay Harden is also believable - and oddly sympathetic - as Sage's hard-edged mother. And I found Judy Greer's turn as Olivia, Elle's recently-ex - and much younger - lover, subtle and touching.

All the old performers are doing the rotten-wrinkly issue now.

De-Niro making a horse's arse of himself in Dirty Grandad, now Lily being objectionable old person.

Goes along OK, but would hate to have granny L in my cafe-diner!

Lily Tomlin has a certain gravitas to her acting that seems to only improve with age. The older she gets, the bigger her bite seems to become. Grandma is perhaps her finest showcase of how well she can play a multifaceted character capable of great anger and love. It’s a film where she’s allowed to stomp around and bust out those acting chops of fine-wage aging amid a dramedy both gentle and blunt.

Tomlin plays Elle, a poet and lesbian who has grown bitter and weary with age. The film opens with her fighting with her latest young fling who she quickly dismisses as being little more than another footnote of her life. You can see it in her eyes and hear it in her voice that her whole world has been a series of footnotes. Her writing seems to be from another lifetime, as does her car which continues to sputter and die on her. She pushes away everyone as she continues to live a lonely life. But when her granddaughter Sage (Julia Garner) comes knocking, she feels compelled to help her with the issue of affording an abortion.

Elle doesn’t have money to pay for the abortion but she knows a few people. And those people just happen to have grown distant from her as time has passed and the grumpiness has set in further. A minor exception is Deathy, a tattoo artist, but she is also broke. Not so broke is Carla, a cafe owner that isn’t too keen on Elle coming into her shop to insult her youthful employees and methods of selling books. She seems to be on good terms with her ex-husband Karl (Sam Elliott) considering how open he is for inviting her into his place to smoke weed and maybe have some nostalgic sex. But there are still some issues between them, especially when Elle reveals she is trying to pay for an abortion.

Tomlin shines particularly bright here as a woman who seems to have control of her life but grew distant as time went by. It can be seen in nearly every scene, including one moment at a cafe where she gets into an argument with the manager and starts pouring coffee on the floor. Taken a bit further, Elle could’ve gone full Bad Santa on this story by portraying her character as extra vulgar. And yet she seems to be just the right amount of vulgarity to be seen as a character as complex as she is bold.

Her tenacity is perhaps the most admirable trait, where she’s not only afraid to speak up to a protester outside a woman’s clinic but will take a punch to the face from one and still make that appointment for her granddaughter. She feels vindicated to not be reliant on anyone but realizes that it sometimes pays to have some generosity when someone needs your help. And I love how Elle doesn’t quite come to this realization that she has made a mistake until things become so chaotic on her quest for cash that she flat-out tells Sage she is sorry, a feat that astounds Sage among the usually appalling nature of her grandma. It’s not every day a relative is willing to bash your ex-boyfriend’s balls for abortion money.

Grandma is a beautifully bold picture that has real heart amid its loud and frantic drama. While Julia Garner’s performance is a notable one of trying to make a slew tough decisions at such a young age, it’s ultimately Tomlin that shines the brightest in a picture that serves her up as one of the finest and most multi-faceted actresses alive today.