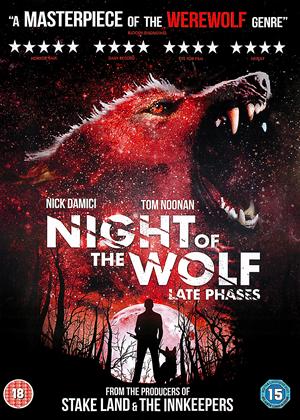 Rent other films like Night of the Wolf: Late Phases

Reviews (1) of Night of the Wolf: Late Phases

Compared to zombie and vampire films, the curse of lycanthropy is under-represented at the box office. Perhaps this is due to the perceived need for a budget big enough to provide convincing man-to-wolf transformations. And yet micro-budgeted UK project ‘Silverhide (2015)’ and this prove that, with imaginative storytelling, the curse of the werewolf can still provide solid entertainment.

Immediately, this story is interesting. Characters are funny and rounded, with blind Ambrose McKinley (Nick Damici) and his over-cautious son Will (Ethan Embry) winning instantly the interest. Ambrose handles the clumsy way the good folk around him overcompensate for his blindness with amusing bluntness (“We’re the police, sir.” “Yeah, I can smell the doughnuts.”). That’s where the secret lies, in my view, of good fiction – if we care about the characters, find them in some way empathic or appealing, then we’re with them when the drama begins.

And it isn’t long before a huge shaggy creature, only partially glimpsed, destroys the lives of many of the characters we care about. Looking as if it has strayed from the set of ‘Dog Soldiers (2002)’ – there’s a lack of CGI here – the creature mainly impresses with blurred and brief imagery. These scenes contrast well with the over-riding atmosphere of late-summer contentment in this picturesque community.

As to who is the actual wolf-man, the suspects are effortlessly presented. It seems any resident in the otherwise quiet retirement community is a possibility. They all seem good natured, wholesome people, but occasional furtive glances, asthmatic conditions resulting in heavy breathing similar to that which Ambrose heard during his initial meeting with the creature, indicates that none of the quirky characters is above suspicion.

There is a transformation scene here, and Director Adrián García Bogliano captures it very effectively, with a swooping camera that gives the impression of the entire scene being one continuous take. When seen in all their glory, the resulting creatures are more rubber-looking than the previous brief glimpses lead us to believe. However, in classic style, we are by this time so caught up in the compelling and original treatment that it really doesn’t matter. Pleasing to see that, although there is much humour within the character interaction, the horrors are treated entirely seriously. Music is provided by the excellent Wojciech Golczewski, who so memorably went on to score ‘We Are Still Here (2015)’