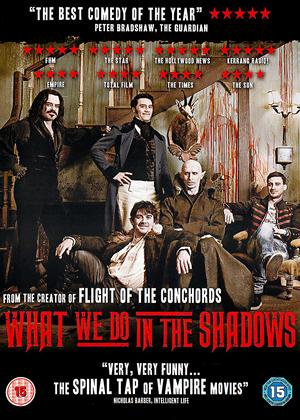 Rent other films like What We Do in the Shadows

Reviews (10) of What We Do in the Shadows

This is basically Spinal Tap with vampires. It's a low-budget mockumentary that has no pretensions, and delivers exactly what it sets out to. The idea that becoming a vampire is a random event which gives you immortality and superpowers without making you otherwise any more special than you previously were has lots of comedy potential, and is exploited very well. The vampire housemates we get to know over the course of the film are oddly lovable despite the horrible things they do (gore is wisely kept to a minimum, so there are very few scenes which can genuinely be called horrific), and the strictly literal interpretation of vampire lore provides plenty of laughs. For instance, if you think about it, people who have been the same age for hundreds of years and can't see themselves in mirrors probably would have dreadful fashion sense, and if you can't enter a building without being formally invited, getting into a nighclub would tend to involve a bizarre conversation with an utterly baffled doorman.

The best thing about this film is that it understands how potentially hilarious it is to portray the everyday lives of people who are essentially very ordinary, but just happen to be murderous supernatural monsters. One vampire in particular is hopelessly inept because he's new to it and wasn't very bright to begin with, and none of them quite know how to cope with the 8,000-year-old ravening utterly inhuman monstrosity in the basement. This is a very funny black comedy that doesn't pull its punches - all the vampires kill humans on a regular basis because that's what vampires do - and at the same time, gets a lot of mileage out of surprising plot-points like the fact that underneath the facade, they're not all that evil, and can't bring themselves to feed on a human who they think is a really nice guy. There's also a lot of comedy that derives from the Dracula-Renfield relationship between vampires and human servants who can go out in the daylight and do things they can't, in return for the promise that one day they'll become vampires and live forever, which is clearly not a thing their masters ever intend to actually do.

This is the funniest and silliest vampire movie since Roman Polanski's "The Fearless Vampire Slayers, Or, Pardon Me But Your Teeth Are In My Neck" came out almost 50 years ago - in fact, I'm surprised there were so few references to it, and I kept expecting them to revisit the gag about a vampire being immune to crucifixes because he's Jewish - and you can't help loving jokes like the scene in which vampires who have just discovered the internet get terribly excited about their newfound ability to watch youtube videos of the sun coming up. Daft fun with a knowing take on vampire movie lore, and highly recommended.

Just brilliant, unexpected documentary style. Just really good.Had this for a while thought it might be dodgy but not, what a surprise Vampires living a ''normal'' life with unexpected problems such as what to wear or long lost love affairs vampires do have hearts.

Dire - What We Do in the Shadows review by CP Customer

Lasted 15 minutes watching this. Gave up the will to live at that point. I really don't want to waste any more of my life talking about it. Save yourself from a similar fate and do not rent this film.

A vampire comedy. This is not sophisticated nor is there much plot, just silliness, jolliness and kiwi madness. Some of the slightly gory scenes are funny. It doesn't sweep you along, there were a few times the joke wore thin but I stayed with it and was repaid with a gentle humour. All of the comedians are accomplished and slick, worth a watch unless your too serious about it.

What we do ? ...Take the pee apparently. - What We Do in the Shadows review by porky

First of all, This was Enjoyably Fun. Very Silly and Entertaining.

Once you have watched half way through the joke gets a bit thin ,and it is after all a One Trick Pony .

Still very entertaining but I did find I had really had enough by the end. so i really couldn't face watching any of the extras .

any more would have been overkill.

LOL - What We Do in the Shadows review by JD

Ok, its not a 5star film. But it deserves it and it is hugely entertaining.

The main kick it gives you is its just funny.

But under that its also pretty clever. These are some talented people.

An original and hilarious film. This is a mock documentary with brilliant special effects. If you want to watch something different, entertaining and funny watch this!

As much as I love the idea of this and the actors, flight of the conchords etc. this is not as good as I was expecting. Still some good crackers and I like the low budget production. Maybe if it was a lot shorter. I d really love to have liked it more. Keep going Jemaine...!

Comical jewel! - What We Do in the Shadows review by PR

This is such a funny film, not so much because it is about vampires trying to live a normal life (and that works really well, too), but because it so effectively takes the mickey out of several personality types, and of our clichéd reactions, especially when facing an audience. It is so well-observed and incisive it almost hurts! It is an eye-opener indeed to know in advance (almost verbatim) what the interviewees - vampires and humans alike- will say and what facial expressions they will put on for the benefit of the camera. And as icing on the cake, the film-makers have continued the joke throughout: make sure not to miss the DVD's "extra features", which normally includes (real) talks with the director and cast, but in this case involves yet more brilliantly crafted spoof interviews; highlights are the policewoman and the zombie. If this is typical New Zealand humour, I want a lot more of it!

Hilarious - What We Do in the Shadows review by SP

Thought it might be a bit "stretched" at full film length, but was consistently funny and engaging throughout. Recommended.

Finally we have a vampire comedy that is actually good! What We Do In The Shadows is a fantastic new production out of New Zealand. I give it four out of five stars because it is one of those films that seems to get everything right.

What We Do In The Shadows follows Viago, Deacon, Vladislav, and Petyr in a fake-documentary format. They are four - evidently kooky - vampires who share a flat and the waking afterlife. Living in modern times with a healthy lust for human blood is difficult enough, but when one turns a human into a vampire, the whole house dynamic is thrown into chaos.

While it seems like a simple story idea - and it pretty much is - it is still entertaining. I’m a huge fan of sci-fi, so mixing time periods is something I’m familiar with, but this story did it in a different and engaging way.

I hadn’t heard of any of these actors before (except for those of Flight of the Concords fame), and yet they are now on my radar.

The visual effects weren’t anything you would see in Hollywood feature films, but that doesn’t mean they weren’t good. The ‘tricks’ worked, and you would have a hard time picking holes in them.

It is a very weird thing to say that they accurately portrayed comical vampires through their dialogue, but writers Taika Waititi and Jermaine Clement (also the directors and stars) pulled it off. They combined modern characters with those from a very different generation.

A few years ago, spoof films were made and released left, right, and centre. They were absolutely everywhere...and none of them were funny. So, you could imagine my surprise when my neighbour New Zealand created this hilarious work. True, most of the jokes are corny, but it really does work. It is also no surprise that the film has been well received by audiences, as it began by utilising the crowd funding website Kickstarter.

As I said before, audience reviews have been very positive. The classic New Zealand comedy style has translated well, showing its universality. Its writing has been widely called ‘smart’, with the only faults being that it might not be loved by everyone (what film is?!).

What We Do In The Shadows, if you are of the allowed age, is a film I highly recommend you check out. It’s funny, the characters are well-created, and the story wasn’t sacrificed for jokes. The film also deserves extra credit for coming from such small roots. So everyone, watch out for more fantastic New Zealand productions.