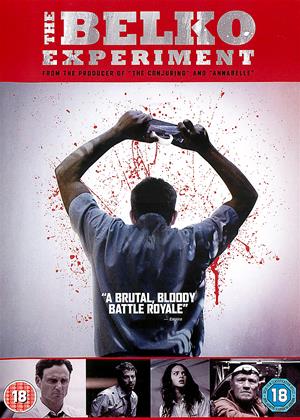 Reviews (2) of The Belko Experiment

A good experiment - The Belko Experiment review by IB

I was impressed by this wacky and gory action horror film which was under rated going by other reviews. It was entertaining even if the story was not very original or far fetched and better than some of the recent horror movies I have seen over the past year.

Blimey the BELKO Experiment was outrageous ! - The Belko Experiment review by porky

I wasnt at all sure this would be any good . sounded the sort of thing that would just end up a tragic mess on film. like a low budget version of Hunger Games or something BUT it actually Gave everything and kept me riveted till the end .

Well worth more than the one watch. Action, Horror, Comedy,Drama,Thriller with an interesting slightly twisted ending.

When it comes to Battle Royale style cinema, one must tread lightly down the dark path of horror commentary for a free-for-all death match where only one can be left alive. Focus too much on the societal impact and you risk a ludicrous tale devoid of mystique and terror. Shift too broadly on the themes and the film could be too much of a passe allegory. And it’s unfortunate that The Belko Experiment lingers too simply on its commentary of workplace comradery being a sham when the chips are down.

Here’s how the very basic story goes for staging horror in an office setting. Belko Industries appears to be a government company based on the highly-guarded building and microchips implanted in employees in case they are kidnapped. One day, those who without a microchip for some reason (interns, perhaps?) are sent home. Something strange is going on. The workplace is a fairly common one; cubicles, cafeteria, offices, dress shirts, IT nerds, simple maintenance people, and a portly security guard at the desk. But then something horrifying happens; mysterious and impenetrable metal shutters enclose the building. A voice-over on some mysterious speaker system informs the entire building that unless a certain number of people are killed within a certain timeframe, employees will be randomly murdered via the microchips.

And that’s about it as far as the story goes. Those hoping for some deeper understanding of why the government is pulling such an experiment is never fully answered as that’s not really the point. The central theme of the picture is that in an office environment when all are targeted, the higher-ups will make tough and unfair calls to save their own skin. There’s disbelief among the employees until heads start exploding and the desperate bosses start calling the shots about who deserves to die. They try to reason that only those of an elderly age will be offed while those with young kids will be spared. But the math doesn’t check out and so they kill more, turning the office setting into a bloodbath.

When it comes to meeting the high body count, The Belko Experiment certainly does get clever with the kills. The head explosions are perfectly timed and well staged. Some people are brutally shot, others having their heads caved in, and one unlucky fellow is crushed in an elevator. But after a while, the horror grows numb, to the point of going cartoonish when one of the bosses is successful in twisting a head all the way around. And when there’s little more to say than provide passing observation of the depraved work environment where only the strongest survive, the message becomes more beaten into the skull than that of poor Michael Rooker.

The Belko Experiment has been touted as Battle Royale meets Office Space. It’s a very apt but also very simplistic blend of office place comedy and twisted survival horror. The film certainly plays up the situation with satire but feels so one-note that the message grows as stale as head explosions which may have been in the dozens. And when the violence becomes so mundane in a film all about action and blood, the experiment comes with lukewarm results. Also, we need to address this; why weren’t more office supplies used in the murders? Why was everyone so desperate for gaining access to guns and knives when they could easily break a coffee cup or sharpen a motherboard? Perhaps for another experiment that has more to say on the odd nature of the kill-or-be-killed workplace allegory.