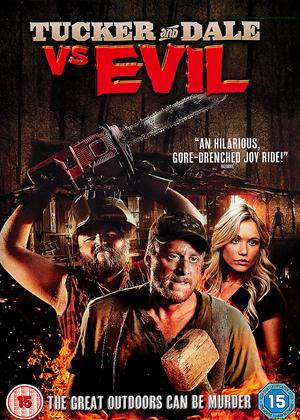 Synopsis:
Tucker (Alan Tudyk) and Dale (Tyler Labine), are two best friends who are taking a break at their dilapidated mountain house. However, their peace is soon disturbed by the arrival of a group of obnoxious college kids. When one of the students (Katrina Bowden), gets separated from her friends, the boys try to lend a hand, only to be mistaken for a pair of murderous backwoods hillbillies intent on killing everything in their path! As they try to put things right, the misunderstanding grows, as does the body count...
Actors:
Tyler Labine, Alan Tudyk, Katrina Bowden, Jesse Moss, Philip Granger, Brandon Jay McLaren, Christie Laing, Chelan Simmons, Travis Nelson, Alex Arsenault, Adam Beauchesne, Joseph Allan Sutherland, Mitchell Verigin, Angela DeCorte, Karen Reigh
Directors:
Eli Craig
Writers:
Eli Craig, Morgan Jurgenson
Studio:
Sony
Genres:
Comedy, Horror

Reviews (1) of Tucker and Dale vs. Evil

Brilliant - Tucker and Dale vs. Evil review by JR

This is a superb tongue in cheek horror comedy. It has the nice twist of the dodgy looking rednecks not being the stereotypical psychos they are usually portrayed as. For fans of the genre it's a classic must see.

Tucker (Alan Tudyk) and Dale (Tyler Labine) are good-hearted hillbillies who have just bought their dream house – a rundown cottage near a lake and seated in the heart of the woods. While Tucker and Dale settle into their new abode, a group of college kids camp out in the same neck of the woods.

When one of them, Allison (Katrina Bowden), takes a night swim and injures herself, Tucker and Dale rescue her and watch over her as she heals. Little did the Samaritans know that their good deeds will be suspected for something sinister. Allison’s friends band together to ‘help’ free her from Tucker and Dale. From this point on, misunderstandings turn violent, and soon enough, Tucker and Dale are involved in a killing spree not of their doing. This is director Eli Craig’s comedic take on slasher films.

As a slasher flick, ‘Tucker and Dale Vs Evil’ is funny enough. True, we’ve seen many horror movies and by now have a sophisticated taste about it. We’re not too keen on the standard ways on how characters die – it should be new and creative. We’re not even sold on a villain killing people left and right without motive – he or she should have a dark side. You may say we also have stereotypes of what a murderer should be – and the leads are dirt-poor hillbillies in flannel and overalls.

This imagery is not just a Halloween costume – it’s unfair profiling, which is exactly what ‘Tucker and Dale Vs Evil’ is making a satire of. Somehow Tucker and Dale’s kindheartedness has been relegated to douchebaggery, and with bodies turning up spectacularly in the woods, as a human being you can’t help yourself.

‘Tucker and Dale Vs Evil’ could not have worked if not for the actors who played them, Alan Tudyk and Tyler Labine. With their doe eyes inhabiting serial-killer looks, they portray their characters in convincing ways. You know you should report them to the police – but they’re just too darn nice – it’s just too hard.