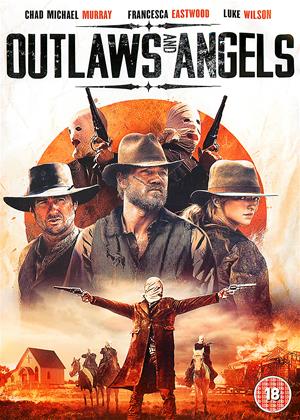 Reviews of Outlaws and Angels

Look, Imma gonna be straight up honest with you: you’re either gonna hate Outlaws and Angels from the bottom of your soul, or cherish it as the second coming of Christ. There is no middle ground for this western-wannabe that will probably become cult classic in few years’ time. Or, to put it differently: Outlaws and Angels is so goodly bad that it’s actually badly good if you catch my drift.

Outlaws and Angels by both director and scribe JT Mollner, starring Francesca Eastwood (yes, that Eastwood) as Florence Tildon, Luke Wilson portraying Josiah and Chad Michael Murray as Henry among others is a mixed bag of western, drama, shoot-out and a melodrama all thrown in there for good measure. Its forte is not however the erratic (although creative) screenplay, its clunky installed set pieces or its laughable line delivery in what becomes an expositional mess; rather, Outlaws and Angels hinges on the unintentional ‘so-bad-it’s-good’ paradigm that plagues unfortunate cinema pieces to either stardom or the pits of hell.

The storyline enters amidst several bank robber baddies who break into a house of an unsuspecting family and held them hostage at gunpoint. Their leader Henry is a bloodthirsty animal who cares only about money and women. So, it’s only logical for him to impose his presence over the gullible Florence Tildon (Francesca Eastwood), who, after witnessing all that Henry’s capable of, quickly turns to the dark side and points a gun toward her father’s standpoint.

Proceeding forward into uncharted territory alongside Henry and his gang of outlaws and borderline rag-tag criminals and we find ourselves drawn into… a melodramatic twists at every turn which convolute what would’ve been an otherwise watchable film. Florence bites the feeding hand, Henry proceeds to… apply his criminal touch everywhere he turns and the family homeostasis is ruined just like that. Yet, as seemingly developed these characters look – they are still stereotypes of what writer JT Mollner thought people would do their biddings back in the day of WWW (Wild Wild West).

Sadly, this is where Outlaws and Angels stops being a cult classic and ventures into borderline questionable film-making territory. And if this wasn’t enough: the feature starts a barrage of all imaginable clichés aimed at the unsuspecting audience whose minds divulge into jelly. It doesn’t matter if the producers are following proper structure; all that matters is Outlaws and Angels’s wish to be like The Hateful Wight when it grows up.

Toward the end, even Luke Wilson cannot salvage this piece of wreckage; amidst all the funny talk, dirty garments and missed film lightning, Outlaws and Angels has, unfortunately, nothing else going on.

Lower expectations, then lower some more, and only then go and see Outlaws and Angels. Do otherwise, and you’ll come up short.