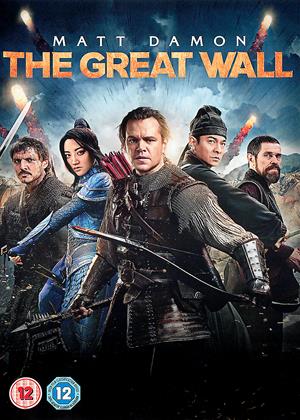 Reviews (10) of The Great Wall

What do you expect - The Great Wall review by AR

This is a film of style over substance. It's suppose to be nothing more than a breath taking spectacle and it delivers on all levels. I'm sorry for the people who expect every film to be shindlers list. Disconnect your brain engage your imagination and just judge it for what it is

Very Disappointing - all CGI and not much else! - The Great Wall review by CS

One of the things which makes a good action movie, especially one based on fantasy, is realism and believability! The landscapes are real or realistic, the props, sets and scenery are in perspective and blend in with their surroundings and the clothing is practice and fits the scenario. In other words a well assigned set should be realistic and believable. Sadly far too many films of this genre rely so heavily upon CGI that they fall flat on their faces! Whilst the CGI in this film is very good, it's over produced and over the top, detracting from what could have been quite a good film! The story line is very basic, the characters simplistic and the monsters unoriginal, in fact it all seems to have ben done before so many times, that it's become a bit of a cliche! Take any monster or action movie of the last ten years and relocate to China's great wall and there you have it! The action is continual, without much of a break, so much so, that this leaves little room for the story line or and character development, meaning the characters end up playing second fiddle to the action. Te explanation of where the monsters came from and what's happening and why, is told in the space of a few minutes and is then literally brushed aside, as we are swept away in a wash of CGI action. I do hate it when they take one actor and multiply them a thousand times and this is quite evident in this film, where many of the soldiers seem to be duplicated, with very little difference. Most f the film seems as though it was made in the studio and only the first five minutes look like they actually took place on location in China, near old parts of the original mud brick wall, rather than the actual solid stone wall itself! An ok action movie for a night in with the kids, but nothing special, this could have had any actor playing the parts, with very little emotion and much less empathy between the main characters and with massive holes in the plot, it's not going to win any Oscars anytime soon!

I thoroughly enjoyed this film in spite -- or because -- of its ineffable silliness. You just have to accept things like the acrobatic rope dancing female warriors -- embrace them! And their adorable blue uniforms. The acting was quite good, too -- I always find Matt Damon very engaging, but everyone was convincing, given that it's a total fantasy. Yes, the plot was very simple, but somehow it held my interest. And, as others have said, it looked magnificent.

Ironically this CGI-laden adventure film about a quest to steal gunpowder never quite catches fire: the plot is functional but formulaic, and the characters are not particularly interesting. Matt Damon is particularly dull as the lead, so it's a bit like watching an Indian Jones film where Harrison Ford has been replaced by someone with zero charisma. On the positive side it looks fantastic and colourful, and clearly plenty of money has been thrown at the screen. Certainly nothing special, but for a couple of hours of entertaining nonsense, this will pass the time pleasantly enough.

Expect more movies like this now that the Chinese own Hollywood and have the cash to make these spectacular blockbusters.

This is well into the realm of fantasy - the CGI makes it all look like a computer game.

Mat Damon and Willem Dafoe clearly did it for the pay cheque, and why not? But best forgotten after spending that really.

Silly, with unbelievable characters (esp the wee women in their blue suits of armour). And typically the Chinese seem to be claiming that they invented the hot air balloon and flying! Just like they claim to have invented football and pizza. Chinese nationalism will haunt the 21st century - mark my words.

All surface, no substance. Just BORING. But I stayed until the end - just.

1.5 stars for the impressive (at times) CGI.

I think anybody going into this film expecting Lord of the Rings standard will be disappointed, but it is clear from the trailer that it is not offering this. It is a big budget, very silly monster movie that requires you to leave your brain at the door and just enjoy, which I did through most of it. There are bigger pot holes that those made in the Great Wall by the monsters but I was not expecting a film worthy of an Oscar so didn't feel short changed.

This film for me was a disappointment , found it quite silly and pointless story.

The film just couldn't keep me interested in it.

Beautiful but ridiculous - The Great Wall review by Alphaville

Director Zhang Yimou has a way with landscape and it’s worth watching this most expensive film in Chinese history (and first major co-production with America) if only for the amazing scenery. As for the action, it’s comic-book, spaghetti-eastern nonsense. The creature-feature story is sheer rubbish. Swarms of demon monsters are dispatched like orcs while Matt Damon fails to convince under Zhang’s translated direction.

As you’d expect from Zhang, there’s lots of colourful dressing up and mass drumming and silly battling interspersed with boring exposition. His concentration on the visual spectacle is laudable but, as in some of his previous work, it’s not enough to carry the film when the script is so awful. How to kill the hordes of attacking creatures? Bungee jump into their midst from the Great Wall. It’s ridiculous. Is that really the best they could come up with? Nevertheless, the scenes filmed around the Painted Mountains and Wangmang Mountain are mesmerising.

Keeping it simple really good Friday night film .. Action packed no time to get bored .. Just enjoyed it for what it was a adventure fantasy film !

Not for me - The Great Wall review by HB

Missed most of what the orientals were saying as the sub titles were on and off the screen so quick. Very disappointing.

The Great Wall is not an exercise in filmmaking insofar filmmaking experiments go: there are the overused tropes of an imminent (CGI) threat that would wipe out the world; there are the heroic antics of peoples of ages long past gone; there are the archetypal heroes each wielding a different weapon and/or the power of wits; and there’s the quintessential action star found in the tired-looking Matt Damon who has difficulty imagining the imagined evil as embodied through these weirdly bizarre lizards looking to ruing everyone’s day in China. Despite all of the aforementioned though, and to the surprise of many myself included, The Great Wall is a fairly entertaining flick all throughout and a joy to be seen on the big screen (or a high resolution, to each his own).

The film starts off with William (played by Damon), who is on a quest to locate and retrieve “The Black Powder”, a plot devi… ehm, a deadly explosive, in order to employ its use for undisclosed reasons (yet). But, as his luck runs out, William gets entangled in an eon-lasting battle against monsters that attack every 60 years. He’s not the only hero however: Andy Lau plays the stoic Strategist Wand who commands his armies with an insatiable thirst for victory and glory; additionally, Jing Tian as Commander Lin Mae is also excellent, and for some reason, William Defoe is in this movie as well, which is awesome! Then, as the plot thickens, the creatures start attacking in hordes and it remains up to our heroes to save the day, and consequently, the movie’s financial investments as well.

The Great Wall features some shady decisions such as making the movie’s main antagonist a bunch of lifeless, ugly lizard-like monstrosities that elicit more chuckles than fear. To some extent, this is a reasonable move, since the film’s main selling point is its pandering toward 3D cinema enthusiasts and similar audiences that are only in for the spectacle and nothing more. But to another, the screenwriters could’ve thrown us audiences something to hang onto, instead of the lazy excuse that we got in order to justify the motivations of the attackers. Still, when the action is about to go down, one can really feel the sheer magnitude of what the filmmakers were trying to achieve, and for a while, this works in their favour. But, as our heroes employ seemingly impossible maneuvers to detract this great evil, the narrative structure quickly falls apart and the audience is left with nothing more than mere visual trickery to hold their attention until the end of the film.

All things considered, The Great Wall can be entertaining, as long as you’re not expecting to find any crouching tigers or hidden dragons in it.