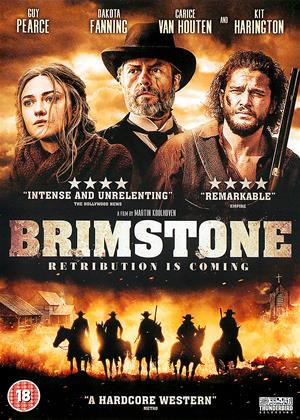 This is the nastiest film I've ever watched - why the hell was it ever made? I reckon I'm pretty toughened to film violence & unpleasant themes & misogyny but this takes the biscuit. Wouldn't recommend to anyone. Hateful.

This is one of the nastiest movies I have seen in a long time.

Who would go to the cinema to see such cruelty to Women and innocent animals ?

Still cannot work out how Arthur Shelby will get back to Birmingham in time to star in Peaky Blinders !

I can't agree with the other review. I found the film powerful and beautifully acted. Yes, the plot is not a sweet one, but there are fanatics and perverts in this world, and Guy Pearce plays one the most loathsome men to hit a movie screen in years. Dakota Fanning is great, and we see her life unfold but not in chronological order which some might find irritating. I loved this ploy. Being an American, I loved seeing the Old West...even if was really filmed in Spain.

This is a relentless, intense presentation of abuse and desperation.

It makes use of the western genre to develop a feminist take on the silencing of women: the female leads either have their tongues cut out or are made to wear iron masks. This makes for a powerful theme. The world of Brimstone is run by violent men, and the main villain is a murderous sadist.

There is a nod at the end to the survival spirit in the female psyche, but it is at great cost.

My one criticism is that the sheer darkness of it all becomes gruelling. The point could be made with a little less gratuitous violence e.g. the outhouse hanging and the belt-whipping of the young daughter.

This is unlike any Western I've ever seen, and it's all the better for it. Told non chronologically the story follows the life of a young woman (Elle Fanning) and a sadistic preacher (Guy Pearce) and is split into four distinct chapters. The structure works wonderfully and builds the suspense masterfully, earning entirely the two and a half hour running time.

Both Fanning and Pearce are truly superb, making this an absolute must watch for fans of the genre. Be warned though, it earns is 18 rating.

Fantstic potential given much too slow development and an unbelievable premise. I really didn't care what happened to which character - at the end I wished they were all dead

The most impressive thing about this film is that it's written and directed by a Dutch guy and filmed in Spain, Germany and Hungary. Nothing in north America, but it convinces. The central baddie character is well played by Guy Pearce, though he is rather comic character.

Awful things about this movie are that it is so slow and overlong, and the 2-dimensional characters, esp the men all of whom are bad and nasty in contrast with all the women who are all victims and innocent in everything in every way. Yawn. The film is divided into several 'chapters' which is a trendy arty device, and relationships between people become clearer as we near the end of chapter 2 - at first, one wonders why the mute woman is so terrified of the new preacher. All will become clear...

This no doubt is a nod to the #metoo boohoo man-hating Hollywood fashion - but on the strength of this, such femi-films should be avoided at all costs. This sort of thing turns so easily into a misandrist cartoon with man baddies and woman goodies, if you're not careful. Is that really what an audience wants to see? I don't think so.

Lots of violence but so what? Doesn't bother me coz it's NOT REAL. Plenty of silly stupid cartoon violence in real comic book superhero films which I detest.

I hated the lush string-based sentimental score for this movie - always prodding the audience to cry at the sight of innocent women abused by nasty men - deeply manipulative, that. Ticking the boxes. Awful music.

One issue I always hate about films set in the 19th century - all the actors look TOO healthy and have perfect teeth - unlike REAL people in 19th century and present America (a British charity works for free to give poor Americans healthcare and dental care too, eg in New Orleans after the flood - their teeth are FAR worse than anything in Britain!)

Watch DEADWOOD the great US TV series with Lovejoy actor Ian McShane to see where they nicked a lot from (incl the brothel/bar, the Chinese trader, the pigs eating the corpses). Watch that for a superior version of 19th century America though that is very violent too.

Watch CAPE FEAR too (both versions) as that was a clear influence.

But if you really want to watch a GREAT movie about an evil preacher, then watch NIGHT OF THE HUNTER directed by the great actor Charles Laughton (Henry V!!! in 1930s film and the hunchback of Notre Dame too).

A BRILLIANT movie yet got such bad reviews on release that Laughton decided never to direct another film. Well done, evil critics. Now where did I put those man-eating pigs...

If excessive violence, pointless savagery & hatred of women is your thing. Then this is for you. Not for me.

This film was probably one of the most grim films I have ever watched, extremely violent and also pedophilia which was pretty disturbing. If I had realised from the description of the film that it would be that disturbing I would not have added it to my list.

Horror Western - Brimstone review by NO

Unusual film-more of a horror story than a Western.I didnt realise that it wasnt a cowboy but I found it fascinating nevertheless.Confusing as

the third part is shown first& itwasnt until I read on Wikapedia that its in 4 parts that I could follow the sequence.It just shows how important

Religion was in those times.The Taliban /Isis are not the only extreme fanatics.