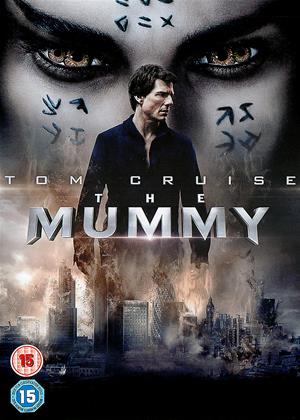 This is such a typical by-the-numbers big budget movie, there is nothing original here at all. Even the sound track is the same constant dramatic classical, just like Speilberg was doing 20 years ago. I actually quite like Tom Cruise when he's given a half decent script and story to work with, but I'm afraid this is not one of those occasions.

Where to start - The Mummy review by RT

this is utter and total drivel - poor acting, poor plot, a poor conclusion

Go back to the 1999 (well about) with Gleason and Weiss. OK it is a B movie - but has a certain appeal and is soooo much more inventive and amusing as this pile of alsatian Turd (I jest you not).

So Cruise becomes the 'love interest' (sorry Weiss was far more appealing - and considerably more likeable and amusing). The leading (?) actress - well we all wondered whether she was simply an import who had not worked hard enough on accent - but apparently, she is British (you see we too can export crap actors to the US).

It fails on so many levels. The spiders don't have ha;f the creep of the scrabs (in the Leason/Weiss film). There is no imagination at all - and I include the introduction of Doctor Jekyll in that! Details are flimsy (really - that aircraft was pressurised and would not survive penetration - pull the other one or at least inform the US military (they need to know). Got to be England - the pint glass have handles :-)

Too much to write but to much time to waste before a better film. We tried this glasses of wine in hand and the only value was in te comments of the (increasingly sloshed) viewers.

But it Cruise has ambition and there was a sequel set up at the end.

where's the story-plot? - The Mummy review by SF

This is one awful load of drivel ,we'd had enough after twenty minutes and turned it off, just the usual reliance on special effects and bangs ,explosions. Not a patch on the old black and white Mummy films ,which had good story lines and a sense of direction, trouble with Tom Cruise films is his massive Ego gets in the way, like insisting he play Jack Reacher!! I think that says it all.

Dr Jekyll and Mr Hype - The Mummy review by JT

Tom and Russel battle it out for most miscast character of 2017.

Crowe wins by a whisker with a woeful turn.

Not sure even my Mummy would watch this, as it's so dire! - The Mummy review by CS

Tom Cruise, in my opinion, hasn't made a decent film in years and the root of the problem I feel is that his ego gets in the way of the film most of the time! So the film becomes less about the storyline, characters and so on and more about Tom and his ego! So this new take on the Mummy is in effect just another Tom Cruise film, it's not a horror movie in the true sense, more of a Disney Pirates of the Caribbean take on a horror theme! There's nothing new or really creative here, in fact it really does have such a strong resemblance to 'The Mummy' trilogy starring Brendan Foster, than it could really be a re-hash of that series, it even references the Egyptian Book of the Dead as featured in 'The Mummy Returns'! Throw in an Egyptian Queen who bears a strong resemblance to 'Queen of the Damned' and a Zombie friend straight out of 'An American Werewolf in London', and what you get is literally a hash of past monster movies, a real Monster Mash, excuse the pun! The special effects are not so special, the script is basic, not much character development or storyline, just lots of chasing, zombies and Tom taking his shirt off! I found this film to be very unoriginal, boring to watch and slightly irritating, as offers nothing new, it's almost as if the talent within Hollywood nowadays is bent on re-hasing old themes, rather than creating new ones. As for Russell Crowe playing the part of Dr.Jeckyl/Hyde, what's that all about, it simply has no place in this film at all and ruins the story! Not quite sure why this is even a certificate 15, when it's more of a Goonies 12!

First was better - The Mummy review by NC

Mummy ? - The Mummy review by porky

Hmm... Interesting ,More a Zombie movie than a Mummy Story to be honest.

Dont quite know why Sandi Toksvig was in it pretending to be Tom Cruise but hey, who am I to complain.

If I had Known beforehand Russel Crow was in it I wouldnt have even Bothered to watch it , cant abide him.

and the addition of Dr Jekyl/Mr Hyde in the story was just plain Stupid.

Entertaining Evening Movie . but Not Great ,and probaby not worth a second watch ....soo Hire it Dont Buy it .

Im trying hard to think of something good about it. Oh yes, there was one scene i enjoyed the sound effects.

Seriously, avoid this one.

Dreadful - The Mummy review by DH

Not a massive Tom Cruise fan, but he usually makes decent films. Probably because he doesn't need the money. But this one, simply awful.

A good Tom Cruise romp - The Mummy review by BB

I love Tom Cruise, but for how much longer can we suspend disbelief sufficiently to accept that, after so many action movies under his belt, he can still do this stuff. Yes a very confused film but highly entertaining. Not sure why everyone seems to be slating it. What did they expect from a TC film when they ordered it? It was just TC playing TC opposite a pretty girl against a dodgy villain.

Mummified - The Mummy review by RH

Silly film. But watchable if nothing else to do. Narrative dominated by special effects, and even though I enjoy Tom’s action movies, he really doesn’t get a chance to get into character. Open end for Mummy 2.

Oh, sure, it would be nice to have a modern Mummy movie that can better encapsulate that aspect of horror and terror that the original held, but that’s just not the world we live in anymore. If you want to dig up a property nowadays, it either has to come bundled with nostalgia or restructured into an action blockbuster. And since Universal’s mummy property is far too old for 30-somethings to gush over, it’s off to the Alex Kurtzman action factory for this monster.

To be fair, the mummy could really use a makeover. How scary can you make a bandaged and undead Egyptian? Given the right horror director, of which there are plenty nowadays, it could be accomplished, but, again, a much different world. Universal doesn’t just want a monster movie, but a monster franchise of a connected universe. And nothing says connected universe like safe, flashy and quippy action. At least the mummy will receive a gender change, a better costume and a more physical presence to be a threat. Or as much of a threat as this monster can be for an action picture.

The mummy in question is the evil Princess Ahmanet (Sofia Boutella), royalty of old Egypt that just didn’t feel powerful enough. With no more ladder to climb for a princess, she makes a deal with the supernatural forces of Set to become a monster of eternal life and great evil (or some crap like that). She goes on killing spree, but is only one stabbing away from her new powers when the guards restrain her and bury her alive. Fast forward to modern day where the roguish treasure hunter Nick (Tom Cruise) stumbles onto her tomb. Ever the seeker of fortune, it doesn’t take much for him to crack open her prison, leading to him being cursed by Ahmanet. Having now gained the ability to suck the souls out of men, the revived Ahmanet is only one stabbed Tom Cruise away from that eternal life. All she needs is her magic dagger with its magic stone and some alone time with a shirtless Cruise.

The monster of the mummy has neat aspects to her character, but they’re rarely explored. The curse she places on Nick causes him to be unexplainably drawn to her presence. All this amounts to is forcing Nick to certain scenes so the plot can keep going. Ahament seems to have control over spiders, but this is never explained past some easy outs for the monster to escape. And if the mummy can gain all her revival power from the sucking the souls out of men’s mouths, why wouldn’t the twentieth victim just cover his mouth?

There’s not much organic flow for such an adventure that presents handfuls of decent scenes that don’t connect as well. There’s a terrifying scene where a soldier turned zombie stabs his superior to death, but it’s quickly ended with a humorous double-tap of gunfire. After a thrilling practical scene where Nick bounces around the interior of a crashing plane, his revival at the morgue comes off more comical for him being naked than intriguing for, you know, surviving a crash after dying. I understand the film’s desire to balance a horror element with a high-spirited adventure, but it’s less a case of mixing chocolate with peanut butter and more of ice cream and ketchup.

The same goes for the character which are about as predictable as action movie archetypes can get. Tom Cruise is playing his most generic of action movie roles, a character so basic that his catchphrase is asking people where’s their sense of adventure. His love interest of the archeologist Jenny is the standard love-hate girl, made evident by her first scene where she smacks Nick across the face for sleeping with her and stealing her stuff. Even Ahmanet is a typical seductress of a villain, never reaching that level of an implied love triangle between Nick and Jenny. This leads to several awkward scenes, as when Jenny walks in on Nick being straddled against his will by Ahmanet, with Cruise delivering the expected line “this isn’t what it looks like.” There’s more quips than quality in this script where Kurtzman desperately tries to weave atypical blockbuster laughs; laughs that are about as artificial as the ho-hum computer graphics.

The only intriguing aspect of the movie, outside of Tom Cruise’s solid stunt work, is a secret monster containment organization led by Doctor Jekyll (Russell Crowe), intended to be a linking device for Universal’s future monster movies. This is a rather neat idea, especially when Jekyll’s Hyde persona attempts to bargain with Nick to be an evil duo. I can’t wait to see how the connected world of monsters plays out, even if it’s an obvious bank off the success of Marvel’s franchise formula. It’s just a bummer that the first foray into the series happens to be the most boring of monsters with the most uneven of adventure pictures.