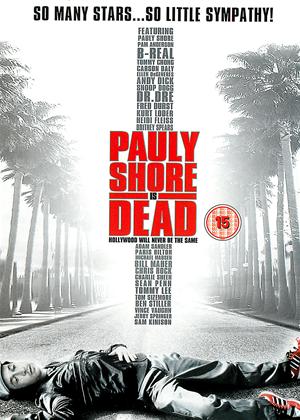 Reviews (1) of Pauly Shore Is Dead

I have to admit to never being a fan of Pauly Shore; although the plot of this film sounded such a clever idea I thought I would give it a go. If you're not familiar with Pauly Shore, he is a comedian who had a string of hit films in the U.S in mid 90's (Bio-Dome, California Man, Son In Law), in most of which he usually played a juvenile Californian stoner-loser character nicknamed 'The Wiezel' who's main aim in life was to party and have fun. While in his heyday he was a big star, his brand of comedy soon grew tiresome, he failed to adapt as an actor and his career soon came to a grinding halt, to the point of working as an uncredited TV extra and parking cars at the L.A comedy store owned by his mother. The first half of 'Pauly Shore Is Dead' starts as a brief biography of Shore's life charting his rise and fall, the second half then departs into fiction where Shore fakes his own death hoping that the media and public will remember and celebrate him as comic genius who died before his time, except the plan backfires with disastrous results. Although the idea for the story is quite clever it's incredibly badly executed and not so much a film as a case study of what happens when a spoilt narcissist tries to regain his glory days, and while there is a self mocking tone to the film, it doesn't mask Shore's resentment of both the Hollywood studios and his fans. He makes fun of the films that brought him fame, but maintains throughout the story that the failure of his career is the fault of the Hollywood system for not seeing his potential and his fans fault for being narrow minded idiots who wouldn't allow him to move on. In short, 'Pauly Shore Is Dead' documents the life of an untalented guy who due to his mothers industry connections got lucky in the 90's and now resents the world for getting bored of him, and what could have been a clever and biting satire on the actors rise and fall from fame, and a golden opportunity for Shore to show the world something different, soon turns into an unadulterated, immature and shameless plea for personal and professional validation, which will won't win him any new fans and alienate the few he has left. As well as being an unfunny comedian and an amateurish actor, he can at least add awful director and screenwriter to his resume.