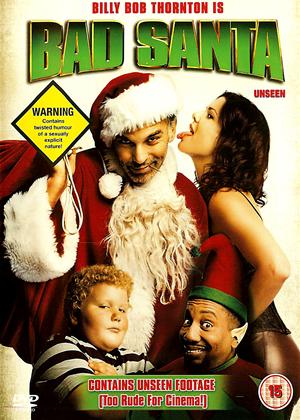 Billy Bob Thornton plays 'Willie', a department store Santa who drinks on the job, swears in front of children, wets himself in his Santa suit, and has sex with customers in the changing rooms on his coffee breaks. As if all that wasn't bad enough, when his annual Christmas stint is finished, he turns around and robs the very stores that hired him. Willie's partner in crime is 'Marcus', a dwarf who works with Willie as one of Santa's little helpers, but in reality is the brains of the operation. The best thing about 'Bad Santa' is its total irreverence and complete indifference to every standard and tradition associated with Christmas. While familiar carols play endlessly on the soundtrack, Thornton acts out a black comedy that literally rips to shreds our most cherished holiday, and utterly without shame. Even the choice of the films setting, Phoenix Arizona, with its searing hot pavements and fully blooming foliage in the dead of midwinter reflects the skewed, surreal tone of the film. 'Bad Santa' is certainly not a movie for children, but then it was never intended to be, but If you like your comedy dark and your sentiment genuine then this is a must see movie!

I’m going to go and buy this film, i laugh all the way to the end, great film for adults.

A very funny film based around the antics of a crude, rude ex-con played by Billy Bob Thornton. His character 'Willie' turns up for work drunk every day along with his 'elf' sidekick. Willie swears and is generally extremely rude and unpleasant to everyone but as the film goes on we find out more about his miserable childhood and abusive father. His salvation comes in the form of an obese kid who gets bullied by the neighbourhood gang and a quirky barmaid who adores him, despite his many faults. It's a funny film which pulls apart our Christmas traditions, especially the money making ones.

I've seen this a couple of times and each time thoroughly enjoyed Billy Bob Thornton's performance, and actually the rest of the cast too. No wonder there's talk of a sequel.

It's crude, outrageous adult humour, and yet somehow serves to carry a Christmas feel-good message - and as an alternative to the usual PG mush.