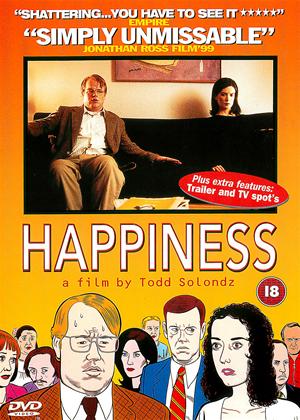 Though told mainly from the viewpoint of Joy, ‘Happiness’ is essentially the story of three sisters and the characters that surround their lives. Helen is a successful and arrogant writer of sexually explicit fiction who boasts to journalists of wanting to know what it is like to be raped and abused, but deep down sees her own work as shallow and exploitative. Trish is a middle class housewife and mother of three, happily married to psychiatrist Bill and on the surface seems to have the perfect life, except one thing, Bill is highly manipulative and active paedophile who preys on young boys. Joy, the youngest of the sisters, is a sensitive and sweet natured woman who always seems to be unlucky in love and who always manages to get on the wrong side of everyone she meets. After breaking up with a man she dated at work he responds with a malicious and vitriolic rant and then commits suicide a few days later. In an attempt to make a new start she decides to work as an English teacher at an immigrant education center, where she is despised by her students and fellow workers for being a scab during an ongoing teachers strike. The only person who is kind to her is a Russian student named Valdimir who seduces her in order to rob her of her possessions. I have to admit I bought the DVD of Happiness on impulse about seven years ago as it was on sale for £1.99, and thought it was so bad I switched it off only 20 minutes in and sold it on eBay the next day. Since then I’ve rediscovered the films of Todd Solondz, first with ‘Welcome To The Dollhouse’, then ‘Palindromes’ and then ‘Storytelling’. And though I through loved ‘Welcome To The Dollhouse’, it was only after watching ‘Palindromes’ that I got what Solondz is trying to do via film. As well creating great characters and stories, Solondz’s subversive skill is to create scenarios which at first make you laugh then sharply stab your conscience when you realise your laughing at the most appalling of situations, and his second film ‘Happiness’ is without doubt the most potent with this ability and as a film is thoroughly captivating. Be warned though, this is a film which in parts is incredibly uncomfortable to watch and often offensive and if you’ve not experienced a Todd Solondz film before you might be better off trying out ‘Welcome To The Dollhouse’ and ‘Palindromes’ first. But if you like independent cinema and are not easily offended then this is and outstanding film.