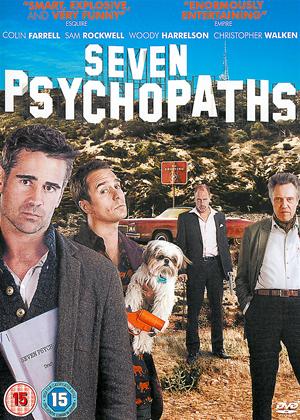 I know you should expect a film with this title to have psychopaths in it, but I was expecting it to be more about the process of writing a book. Having said that, the premise is interesting, and the characters engaging. It is well cast and very well acted. I confess I found it disturbing rather than amusing, and ultimately quite upsetting - but good cinema. It makes a change from a lot of the other stuff that's out there.

The key players certainly deliver, especially Woody Harrelson as the mobster and Christopher Walken as the dog-kidnapper with a sinister past, but the Colin Farrell character - a borderline alcoholic writer struggling for inspiration - seemed bland and stereotyped, overshadowed by the other male leads, and nothing like as memorable as the suicidal hit-man Ray of In Bruges. Of the stories-within-stories, two of the three were quite weak (and there were only 3 not 7 as I was expecting) and were not really about psychopaths at all, just vengeful obsessives.

The action and situations often feel too much like an unironic mash-up of early Coen Brothers and Tarantino movies, although lacking their tautness and memorable dialogue. But this slightly clunky attempt at fusing genres - action, neo-noir, farce - does at least deliver a funny and macabre twist at the end.

Altogether it is moderately entertaining but if you've seen In Bruges, don't get your hopes up too high.

Mother in law will hate it. - Seven Psychopaths review by NC

Quirky film with off the wall guys like Walken, Farrell, and Woody.......what not to like? Black comedy for sure.

The storyline.... bad man's dog gets dog napped, bad man goes after men who did the dog napping. It's not on the face of it an interesting set up but it's the interwoven lives of the main characters that makes it.

Definitely worth a second watch as you miss some of the finer details and some of the really funny bits first time round.

A rather bizarre piece that begins under the guise of an average Hollywood action lead revenge drama Seven Psychopaths ends up as a surprisingly thoughtful piece with a contemplative edge that is likely to sail over the heads of many an audience member.

The story centres around alcoholic screen writer Marty whose current idea currently consists of nothing more than a title; “The Seven Psychopath’s”, and looks as though it may be little more than a collection of horrific stories of revenge fuelled murders enacted over the last twenty years. However when the psychopaths (all derived from news pieces or overheard bar talk) begin to cross Marty’s path he, and his friends Billy and Hans, find themselves enacting the final stages of any stereotypical action film, on the run from a dangerous gangster driven crazy following the kidnapping of his dog.

Through this rather confusing storyline however an interesting line of connectivity has been woven by film maker and screen writer Martin McDonagh, onto which a bizarre but rather charming comedy is strung; the story of a father who seeks revenge against the rapist who murdered his young daughter unwinds alongside the tale of a mysterious killer who leaves a playing card at the scene of every death, all the while Marty is attempting to turn his violent action drama into a story of depth and perception.

Though in all honesty the premise is rather stretched, as one gets the distinct impression McDonagh is in fact Marty and couldn’t think of a more concrete story for his seven psychopaths, the characters and performances, particularly those of Christopher Walken and Sam Rockwell, make this a surprisingly enjoyable movie that leaves you feeling reflective but undeniably satisfied.