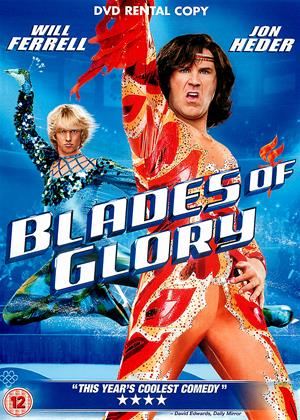 Reviews (3) of Blades of Glory

If you are expecting a film as funny as Tallegda Nights (excuse spelling), then I'm sorry to say that you will probably be disappointed, even though the films are very, very similar in story line, humour etc.

There are some funny moments, but also a lot of predictable homophobic jokes, cheesy ending etc!

I love Will Ferrell, but after watching this, I couldn't help but think, that maybe he has done one too many of these movies, with the dense, over emotional, main characters.

Sorry for being so down on this film, I was just expecting laugh out loud funny, and not the occasional smirk!!!! Probably if I wasn;t such a huge fan of his other films and watched them a lot, then this may have been received better!!!! It just seemed like the same script but with ice skating instead of cars!!!!

Funny from start to end. - Blades of Glory review by CP Customer

Blades Of Glory uses the tried and tested formula of two bitter rivals who after a fall from grace put aside their differences in pursuit of a common goal. The difference with Blades Of Glory is that it pulls it off incredibly well. Jon Header and Will Ferrell work brilliantly well together and this is easily the best thing Header has done since Napoleon Dynamite. Despite not being a particularly big fan of Will Ferrell and having a healthy dislike of ice skating I absolutely loved every single minute of this film. A great story, hilarious action and some really funny dialogue had me laughing all the way through.

This is a typical laugh a minute Will Ferrell film, not quite as good as Talledaga nights, but very good none the less. Some classic Will Ferrell one liners as he is paired with Jon Heder in a opposites attract combination. Enjoy the film!