Rent For Your Consideration (2006) 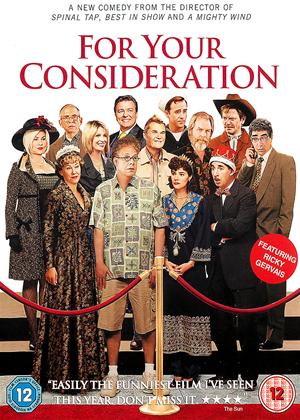 Reviews (2) of For Your Consideration

Satirical and Camp! - For Your Consideration review by CP Customer

For your Consideration is the first film that I have seen by the acclaimed director Christopher Guest; and after this I am eager to see another.

The plot is based around the superficial lives of people in the acting business and mocks the hype surrounding the Hollywood way of life and the Academy Awards. We are introduced to a crew in production of an overtly emotional period drama and the mediocre lives that the crewmembers lead. This all changes when there is a rumour about several actors being nominated for an Academy Award which ultimately creates a tragicomedy as we see the effects that this rumour has.

As with most Christopher Guest films, the script is mainly improvised, which may put some people off, though I think the dialogue is both droll and entertaining. I give special acclaim to Catherine O Hara who delivered a strong performance as the feeble minded protagonist and Ricky Gervais who makes a cameo and delivers his usual dead-pan humour. The film adopts both a Hollywood style narrative and a mockumentary technique that increases its satirical and witty style.

If you are looking for an epic story with deep characters and a serious undertone this film is definitely not for you, as I feel that there was room for further development in some of the characters, especially considering how short the film is. However this film is funny, easy going with the hint of a moral message as it’s backbone.

Not much to consider. - For Your Consideration review by CP Customer

This really isn’t one of Christopher Guest’s better efforts, there are few laughs, and the film is more a satire on the Hollywood awards system. Guest's usually small tight-knit cast is overblown with too many characters that have little chemistry with each other, there's even a completely pointless cameo from Ricky Gervais who looks genuinely uncomfortable on film.