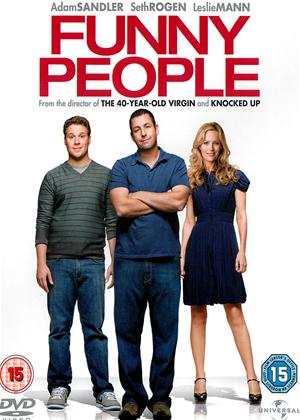 A complex look at the lives of comedians. - Funny People review by CP Customer

George Simmons is a comedian at the peak of his profession; he has fame, money, a successful movie career and the respect of the comedy industry. When George is diagnosed with a potentially terminal illness it forces him to re-evaluate his life. Aiming to get back to his roots as a stand-up comedian he returns to the comedy club circuit and meets a struggling comedian named Ira, who by day works in a Deli and by night performs for free in comedy clubs. Offering Ira a job as a joke writer and personal assistant George takes him under his wing and offers advice and exposure by making Ira the opening act at his performances. Ira offers George friendship and helps him find closure in the many areas of his personal life where he has failed. If you’re looking for a really funny laugh a minute film then you’re going to be disappointed. There are some really funny moments in this film, though nearly all of them are during on stage scenes of George, Ira and others performing stand-up routines but the bulk of the film is actually quite solemn and bleak. Like Judd Apatow’s other films the story is essentially one based around redemption and the lead characters journey in finding the right path in life, while the more sombre side of the story is veiled under a layer of comedy. The film also highlights the various complex traits of many comedians’ personalities, ego, competitiveness, envy, self-doubt and neurosis. This is bound to be a film which will divide opinion, you’ll hate it for being overly long and not that funny, or you’ll love it for its depth and the journey the story takes you on; but for me this is the best film Apatow has made so far. Overall, this is a smart, cleverly written and well directed film and easily the best straight role performance from Adam Sandler since ‘Punch Drunk Love’, and while Seth Rogen’s acting ability is still limited to playing a version of himself he does manage to portray the character of Ira as quite innocent, insecure and genuinely likeable. The disc contains two versions of the film, the theatrical cut running at 2 hours 26 minutes and the extended cut running at 2 hours 33 minutes. The extended cut is hidden in the DVD main menu ‘bonus’ options and the only difference between the two versions is the extended cut has a few extra stand-up performance scenes, but nothing relevant to the plot.

Serious themes in a comedy - Funny People review by JD

There are lots of themes and messages to this plot. Fame is a babe magnet, a chance at fame brings out the worst. What do you say if you're famous and have bad news, do you hide it or not? Essentially many problems relating to being famous. But Adam Sandler is not a great actor in a semi-serious role and it always felt a bit undramatic and casually acted. Too much "actors introspection" to make it funny for me. In a word, bland.

So Not Funny - Funny People review by CP Customer

The concept of a successful comedian returning to his roots and helping others whilst trying to correct flaws in his own life is intriguing. Unfortunately this is lost amidst the pathetic attempts at humour that seem to consist of jokes about women and private parts. Judd Apatow just cannot drag himself out of the gutter and so he relies on the same old formula once again.