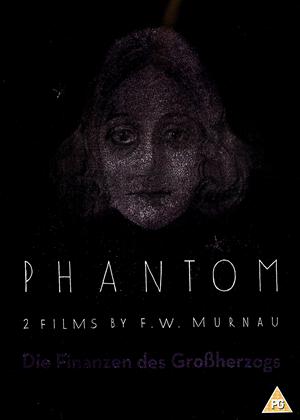 This minor masterpiece of German Expressionism isn't quite up there with the same director's "Nosferatu", but it's still an exceptionally good example of cinema from that era. It's surprisingly similar to the early work of Fritz Lang, probably because Lang's wife wrote the screenplay. Also, it shares some cast members with Lang's "Dr. Mabuse The Gambler". What it doesn't have is any supernatural content whatsoever; it appears that many of Murnau's films have been misleadingly retitled to imply that they're along the same lines as his greatest hit "Nosferatu". Though the main character does hallucinate a bit, and at one point he tries to run after a figment of his imagination, so I suppose it does technically have a phantom in it after all. Not to mention an extraordinary moment when our hero seems to be under attack from that twisty building spell in "Dr. Strange" 94 years before it was invented!

The plot concerns a very nice, hopelessly naïve, and extremely fantasy-prone man who, after being bowled over by a woman in the most literal way possible, falls madly in love with her. And in this case, "madly" means exactly what it says on the tin. This is the outrageously melodramatic tale of a man's obsessive love for a complete stranger who doesn't have the slightest interest in him, and how it shatters his cosy little world. By the way, if you hate spoilers, you might like to know that the prologue is full of them, so if you don't want to know how the story ends before it's even begun, start at Chapter 3 and rewind to 4:45.

Perhaps the most striking aspect of this film is its honesty about human nature. In stark contrast to Hollywood movies made 30 years later, there's no black-and-white morality. With one exception, nobody in the film is truly evil, and if they do bad things it's because they're weak, selfish, stupid, or in the hero's case, deranged. Almost everyone's a lot more highly-sexed than the Hays Code would later permit, promiscuous women aren't automatically punished for not being virgins, and the extremely physical nature of the hero's obsession with his "phantom" is expressed in a surprisingly frank way. Of course, Germany in the years before the Nazis ruined absolutely everyone's fun was a gleefully decadent playground for those who could afford it, and they were pretty relaxed about that sort of thing, and most other things too. If you pay attention during the first nightclub scene, there's a black man dancing with a white woman. In the USA in 1922, that would have been at best scandalous, and at worst suicidal! Hitler wouldn't have liked it much either.

It's not exactly subtle, and, as with all silent movies, there's some dreadful overacting. But Alfred Abel, who has to carry the entire film, gives an excellent performance as the gentle, innocent daydreamer who suddenly falls victim to raging passions he didn't know he had in him, and spends most of the movie doing things he knows are a very bad idea indeed because he simply can't stop himself. It's also, as silent films that aren't comedies go, surprisingly fast-paced, presumably to mirror the state of mind of its increasingly mad hero. And in the restored and tinted DVD release, despite a few scenes where the ancient print shows its age, it looks absolutely gorgeous. Definitely worth watching if you want to see a silent film that isn't one of the select few everybody's heard of.