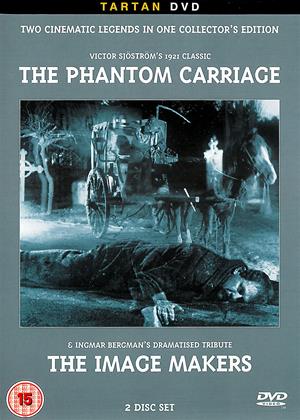 Synopsis:
Legend has it that whoever is the last person to die on New Year's Eve will be destined to drive the Phantom Carriage, collecting dead souls for a year. When a drunkard is found at the stroke of midnight, the victim of a vicious fight, he is forced to relive his past to see how he and those around him have been destroyed by his selfish and destructive ways. Directed by pioneering Swedish film-maker Victor Sjostrom, The Phantom Carriage is arguably the most influential and enduring horror film of all time. Powerful acting and groundbreaking trick photography lend it an otherworldly atmosphere not since matched in modern cinema.
Cited as being one of Ingmar Bergman's primary inspirations, The Phantom Carriage depicted death as a physical and industrious presence, something later echoed in The Seventh Seal.
Actors:
Victor Sjöström, Hilda Borgström, Tore Svennberg, Astrid Holm, Concordia Selander, Lisa Lundholm, Tor Weijden, Einar Axelsson, Olof Ås, Nils Aréhn, Simon Lindstrand, Nils Elffors, Algot Gunnarsson, Hildur Lithman, John Ekman, Edvin Adolphson, Elof Ahrle, Emmy Albiin, Anna-Lisa Baude, Josua Bengtson
Directors:
Victor Sjöström
Producers:
Charles Magnusson
Writers:
Selma Lagerlöf, Victor Sjöström
Aka:
Körkarlen
Studio:
Tartan
Genres:
Classics, Drama, Horror
Countries:
Sweden

Reviews (3) of The Phantom Carriage

Strange story about superstition, alcoholism and the persistence of one member of the Salvation Army in Sweden! Rather strongly acted by the male and female leads I thought, lots of interesting tricksy double exposures to create the impression of ghosts and the ghostly carriage, I thought it held interest throughout and was worth the experience. Hard to read the English subtitles when the Swedish ones were so much more prominent though.

A Ride To The End Of The Line. - The Phantom Carriage review by NC

David Holm's dissolute life has ruined not only himself, but also practically everyone who goes too near him. Even a Salvation Army officer lies dying after too close a contact. His past catches up with him on the stroke of midnight, New Year's Eve, as he sprawls in a graveyard after a drunken brawl, and the carriage of death ghosts around the corner.

It is a life told in flashbacks, but all of the (by today's standards) hard-to-take aspects of silent films are wonderfully absent: there is very little exaggerated melodrama, very little over-the-top histrionics. Instead we get to see a man grown bitter and cynical, who flings compassion back in the face of the giver because he is unable to respond in kind, who is given a second chance but drinks it away.

Performances are superb, but special mention must go to Victor Sjostrom (the director himself) as David Holm. Apparently he lived for a time in the slums of Stockholm in order to gain knowledge and bring authenticity to the role. There is no mugging, no wild gesticulations, just a naturalism so far ahead of its time that if there wasn't evidence that this was made in 1921 I would not have believed it. It's perhaps the finest piece of acting I've seen in a silent film.

'The Phantom Carriage' almost falls victim to its own excellence. The special effects with the horse and cart, and the driver reaping souls, are so extraordinary, that fingers tremble on the verge of drumming if other scenes last a shade too long. And the film doesn't deserve the cop-out ending, very much of its age.

Buy a ticket for this carriage. It's a journey you may remember till your dying day.

If a technically poor, subtitled, Swedish 1921 film about death, evil, regret and primitive superstition appeals; your desire to be in the minority is even greater than mine. I love some pretty cult/non-main stream stuff but this is off the scale. Watch if you are hard core goth or similar. I couldn't finish it.