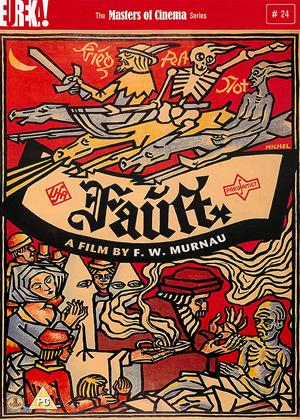 This classic of early cinema has to viewed with the understanding that 90 years ago, special effects were a wee bit less special than they are today. So, crude as it looks now, back then this would have been the equivalent of "Doctor Strange". And in this respect, the oddly stylized German Expressionist sets with their warped geometry help a great deal; everything seems dreamlike and off-kilter, so when the titanically huge Satan looms over a whole town, the model buildings look no less realistic than the full-size ones the characters inhabit. It's the kind of vibe Terry Gilliam and Tim Burton still go for, not always successfully.

The first half of the movie is definitely five-star. The saintly Faust, an elderly scholar willing to risk his soul to save innocent people from a terrible fate, soon finds out, with plenty of help from his new "friend", the gleefully horrible demon Mephistopheles, that hedonistic debauchery is much more fun than doing good deeds which don't always work out too well, especially now that he's suddenly young and handsome again. We're treated to an almost non-stop carnival ride through wondrously Surreal imagery ranging from the frankly tacky to the surprisingly effective, with something weird going on in practically every shot. It doesn't always make a great deal of sense, but I don't think it was ever meant to, and it's tremendous fun.

Unfortunately it sags badly in the middle, when Faust falls in love with the virtuous Gretchen. Faust chatting up a girl he really likes is a lot less interesting than Faust swooping down on a flying carpet to seduce a princess by gatecrashing her wedding accompanied by a retinue so magnificent it includes a couple of unnecessary elephants. "Strange visitors!" the footman announces, and he ain't kidding! The director obviously knew this bit wasn't quite working, because it's livened up by an utterly baffling and, given the horrific tragedy that will soon occur, wildly inappropriate comedy subplot in which an obviously reluctant Mephistopheles romances Gretchen's unattractive middle-aged aunt for absolutely no reason whatsoever. Also, the actor playing Gretchen's brother seems to have been told to play a serious rôle in a funny way, and gives the impression that the man is mentally retarded, although as far as I could tell, he isn't supposed to be. However, it does pick up again towards the end, as Faust has to face the awful consequences of his selfishness. And they really are quite nasty.

So it's not a perfect film by any standards, but, especially when you consider how long ago it was made, it's a very good one, and large parts of it really zip along, providing constant surprises and wonderments. And, 90 years on, that's still how most of us define a good movie. This film is a must for anyone interested in cinema history, but it's also a lot of fun if you just want to watch a movie.