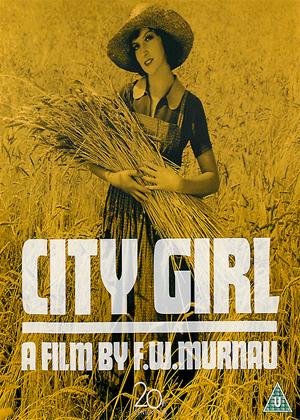 City Girl is a simple story of true love, upheaval and escaping the chores of city life. Mention silent films nowadays and unfortunately most responses will be negative. I find this deeply disappointing, as City Girl is a many tremendous journey and visually beautiful. Presented in its original aspect ratio this is no widescreen presentation yet it is of stunning quality for such an age. The detail, contrast and lighting are a real surprise and mesmerising. City Girl contains several highlights but I really enjoyed the piece with the couple running towards the farmhouse. The camera movement, framing and emotion are of the highest standard and the city scenes capture the chaos and hardship of the period. The release also contains an excellent commentary track from scholar David Kalat that is well worth hearing after you’ve seen the film itself.

Another gem from the silent age and like all the good ones makes you forget your watching a silent by using its visual storytelling that effectively, At its heart it is a simple love story but one that does feature a fair amount of dark moments and one that also delivers memorable scenes by the bucketload that evoke everything from solitude,loneliness anger and joy all shown in a realistic and natural manner. Perfomance wise this one doesnt suffer at all its not that overly dramatic especially in its gestures thats usually associated with the silent era, it was also nice to see a strong willed woman character take the centre stage and to see her stand against the strong violent and domineering Father figure.Although it's not my favourite by Murnau but one i would happily sit through again thanks to its excellent restoration.7+/10

I can highly recommend this silent version of Murnau's companion piece to his masterpiece Sunrise and it is worth watching alongside this earlier film. Once again Murnau explores the tensions between rural and urban life, though this film contains beautiful location photography in contrast to Sunrise's amazing studio sets.

Sex and the Country - City Girl review by CH

We are so used to seeing films set in the past that it is salutary to see one made in 1930 itself: a cloche hat and bobbed hair were a simple fashion item of rather than the work of a research team. The thought comes to mind while watching Mary Duncan, who works in a small but crowded Chicago diner, all steaming urns and jostling elbows at the counter. This is a far cry from a wheat farm in Minnesota whence Charles Farrell has been sent by his fierce patriarchal father to sell the imminent harvest on the volatile market.

Farrell is a man, in thrall to his mother, who is not cut out for that harsh world, and - as he orders a meal, over which he utters a silent blessing - he enters into talk with Mary Duncan, to the chortling badinage of the stranger who sits beside him.

They are smitten, so much so that, within a day, he suggests that she quit her bedsit beside a railtrack (where a plant is ailing from the soot and a caged bird is forlorn), and marry him there and then - before the next train leaves.

Whirlwind is the word for this romance - and, before long, literally for the wild landscape of the farm which she has pictured as a pastoral idlyll rather than the seething atmosphere she duly encounters.

Farrell's father - played by David Torrence - makes his displeasure known, even slapping Mary Duncan (a contrast with his gently brushing wheat dust from a large bible). Inside and out, in city and country, every scene is wonderfully filmed by Murnau, whether surging thunder, railroad wheels, a crowded attic. A team of itinerant harvesters is holed up in that room, among them Richard Alexander (as Mac): he is a dead ringer for Jack Nicholson, salacious look and all, as he suggests that he can take Mary Duncan away from the unfortunate situation in which she has found herself.

How will it turn out? That is not for me to say. These ninety minutes go by swiftly, the cinematography transcends melodrama, so much so that one is involved at every moment. And it is, in some ways, redolent of the continuing conflict in America between city and country.

Did I say that it is silent? If you are one of those bothered on that front, set aside such thoughts, and revel in this delight.

The last of the stunning sequence of silent dramas made by Fox films at the dawn of the talkies. City Girl was released in a movietone version with some dialogue but only the beautiful silent alternative remains.

It is a domestic drama with a rural setting. Charles Farrell goes to Chicago to sell his father's wheat and impulsively marries the flirtatious but world weary waitress (Mary Duncan) he meets working in a big city diner. When he returns home with his bride he finds his father unimpressed with his business acumen and his choice of wife. In fact his father finds much to be angry about.

This is a work of realism without the metaphysical elements of the films Frank Borzage was making for Fox at this time. But its naturalistic narrative is gloriously illuminated by the golden splendour of its images (photographed by Ernest Palmer). Its artistic lighting is enchanting.

City Girl absolutely works as a romantic drama. Its location shooting in Oregon (standing in for Minnesota) is richly atmospheric. Farrell and Duncan handle the comedy particularly well (though they lack the chemistry he shared with Janet Gaynor). But it's the visual appeal of the film which makes it such an exalting and haunting experience.