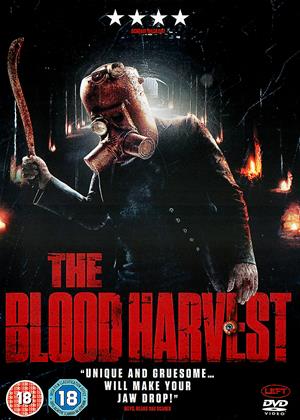 Synopsis:
When a spate of horrific murders take place in and around Belfast, Detective Chaplin (Robert Render) suspects it may not be a serial killer but the work of something supernatural. His unconventional theories get him fired from the investigation, but not one to give up easily, Chaplin works secretly with his old partner Detective Hatcher (Jean-Paul Van der Velde) to try to bring an end to the slaughter, one way or another. But the closer Chaplin gets to finding the killer, the more he puts his own life at risk, as he encounters the unexpected truth behind the sinister events.
Actors:
Robert Render, Jean-Paul Van der Velde, Rachael Stewart, Griffin Madill, Rachael Galloway, Alan Crawford, Matthew McCreary, Liam Rowan
Directors:
George Clarke
Producers:
George Clarke, Kenny Martin
Writers:
George Clarke
Studio:
Left Films
Genres:
British Films, Horror
Countries:
UK

Reviews (1) of The Blood Harvest

This micro-budget independent film opens with the grisly murder of a young lady, involving the removal of one of her eyes, sewing up of the mouth and the slashing of the tendons. The miscreant is one of two brothers who spend much of the running time committing similar atrocities, while wearing a variety of masks – a skull-fashioned motorcycle helmet and an elaborate welding/gas mask.

Jack Chaplin (Robert Render) continues to investigate the case despite being officially sacked from the force, aided by the sometimes incomprehensible Detective Hatcher (Dutch actor Jean-Paul Van Der Velde). The macho, New York style of tough-talking dialogue would be difficult for anyone to perform, and often sounds very unconvincing from this cast.

The masks are removed earlier than is the norm for such reveals, and the acting from the two mentally deficient young miscreants is the best seen throughout the run (the two feral brothers eventually fall out over a pretty blond. This leads to one killing the other), although they appear too well groomed to be the outcasts they are supposed to be - in fact, the police are more dishevelled. The end reveal may or may not have an explanation for that …

The reason for the killings is finally explained in a heavy stream of dialogue that reveals a twist so utterly bizarre, it is likely that no-one will expect it. Many will be unable to take it seriously, but it might explain some of the stilted line delivery of Hatcher. These scenes are classic examples of the villains taking time to explain the plot to the hero moments before the game is up. In-keeping with the difficult-to-stomach style of the film, and the mind-blowing revelation about Hatcher (which I won’t reveal), his being carted off to face justice is … going to be difficult to carry out.

‘The Blood Harvest’ is a strange mix of styles, a far from obvious way of telling a slasher story. Director, producer and writer George Clarke makes incredibly good use of the £10, 000 budget, his mix of close-ups and shaking camera movements creating a sense of pace, even when the plot simply lines up one victim after another. This is a refreshing way of presenting horror and that alone makes up for the film’s short-comings.