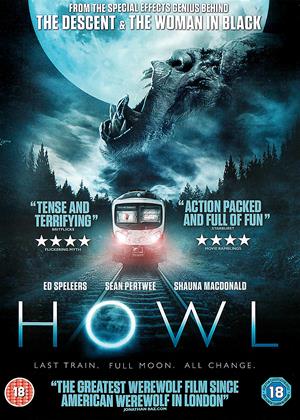 This is a terrific production. Constantly under-valued Joe is given guard duties on a train. Despite being told he gets on well with passengers, when he checks the tickets, he is met by the kind of casual ignorance and rudeness you would expect from the complaining, self-obsessed, terminally dissatisfied general public. The train driver is played by Sean Pertwee in little more than a cameo, and he is the first victim of the howling horrors ‘out there’ in the night that seemingly cause the train to halt in the middle of nowhere. That the miscreants appear to be werewolves is bad news for Pertwee, who has previous form with lycanthropes (1994’s ‘Dog Soldiers’).

Ed Speleers is excellent as Joe, whose wearisome tolerance of his increasingly dire situation is written in the wrinkles on his forehead. He clearly wants to be somewhere – anywhere – else, from the get-go, and our sympathies are with him. This is particularly apparent in his relationship with tea-trolley girl Ellen (Holly Weston), who – alongside the rest of the passengers – is constantly being charmed by the authoritative clever-clogs Adrian (Elliot Cowan), who always seems to do and say the right thing. For a while at least.

Other passengers include a teen girl who uses accusations of sexual impropriety to get her own way, Duncan Preston as the elderly Ged whose patience is constantly wearing thing and an overweight man who is never quite aware of what is happening around him. These characters are believable and very well played. And they all have no truck with poor Joe. The courteous and polite Matthew is the exception, and Amit Shah’s playing of him losing his composure and killing the first of the creatures we see is very powerful. Jenny, Ged’s wife, is also very well played by Ania Marson.

Visually, the were-beasts are sometimes very impressive and sometimes not so much. However, they thoroughly convince as virtually unstoppable, rampaging killers. In the darkness of the wilderness surrounding the stranded train, they are exceptional with glowing eyes and shaggy manes.

As a whole, I had a great time watching this. It is a good, solidly made traditional werewolf/horror picture, beautifully directed by Paul Hyett. Some people may be irked that more wasn’t revealed about why and how the pack exist undetected in the English countryside, but the lack of explanation doesn’t bother me at all, especially when the results are this good.

Hackneyed werewolf fare done a million times before. Low-budget, so what looked like it might be the start of a transformation, er, wasn't.