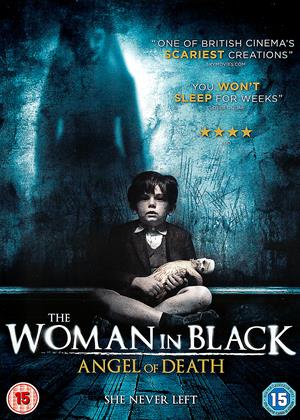 Rent other films like The Woman in Black: Angel of Death

Reviews of The Woman in Black: Angel of Death

The Woman in Black: Angel of Death review by Mark McPherson - Cinema Paradiso

One of biggest hurdles for a haunted house film is keeping the people inside the house. Sometimes it’s money, sometimes the ghosts lock the guests in and sometimes there just plain isn’t a reason. The Woman in Black 2: Angel of Death at least offers up one of the most viable excuses: the London blitz. That’s reason enough to stay inside with the creepy ghosts that want to torture mortals with jump scares and possession-driven suicide. It’s one of the few smart choices in yet another silly run through the haunted house genre.

There’s at least an attempt to be more of a period piece with this sequel set 40 years after the first film. The plucky school teacher Eve and her snobby headmistress Jean escort their young students to an old country manor. The house is decent enough for survival when the bombers come a-bombing, but perfect for ghosts to haunt. The walls and ceilings are dilapidated with dull colors in a dreary setting that always makes the house appear dark no matter the time of day. There are plenty of dirty rooms and cracks in the walls for all sorts of spooky spirits to seclude and fester. The resident ghost is a mother who lost her child during birth and is now taking it out on Eve and her class (specifically because of Eve giving up her child).

All the parts are there to assemble a moody and frightful experience with plenty of themes to play with. For the first half of the film, it even builds itself properly. The war setting is neatly dressed for the period with depictions of bombings and old fashioned costumes. There is ample reason given to stay in the house and even a soldier pilot to converse with. The hauntings start slow enough with creeks in the walls, rocking chairs moving on their own and the eventual origin vision of the ghost mommy losing her child. These are all fairly standard, but presented well enough.

But then the killings start and children are once again a target. The children end up being picked off one by one from the angry spirit. The vengeful spirit takes aim through causing the kids to hang themselves, suffocate and collapse dead on the beach. The film never lingers on these deaths too long to make sure the film is still worthy of a PG-13 rating. I’m a bit torn on the choice in victims. It seems rather cheap to place children in danger, but there is something slightly admirable about actually going through with child murders. There are just too many children placed in this scenario that you’d think by horror movie logic that nobody would even die in this film since kids are mostly off-limits. But there are only three adults present so it seems like the writers were forced into a corner on this one.

Despite some okay scares with jumps and noises in the darkness, the entire third act is little more than Eve running around trying to save Edward from the ghost. She dashes across fields and into the house where her dialogue is downgraded to one-word questioning and calling of names. By this point you’re at least partially grateful for some more action after long stretches of exposition. There’s even a nice change of setting as when the group migrates to a faux airfield designed to bait bombers, using the bunker as shelter.

The Woman in Black 2 is such a disappointment for how effectively it establishes its horror, only to turn on autopilot when it feels that it has reached an acceptable height. Just thinking about how much wasted potential it had is infuriating. There were plenty of angles to explore from the pains of losing children to the conflicting emotions of being thrown into this situation from war. Even just hearing the children talk some more about how disturbed they are that they are dying would have been an interesting addition given how caustic they appear on the subject. With a strange lack of focus, it’s hard to care for such a well-designed vehicle of terror when it has nowhere interesting to go. Such a shame that a worthy production will be lost in the bin of lackluster horror sequels when there was clearly more here than its predecessor.