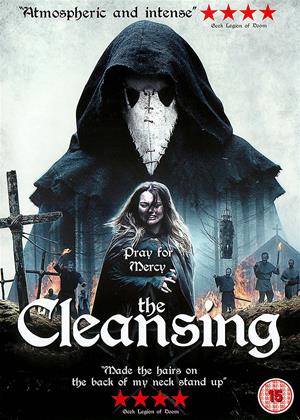 Synopsis:
In 14th century Britain a sixteen year old girl is accused of being a witch and causing the plague that has ravaged her village, taking the lives of many, including her own father. When it's revealed that she has been hiding her mother's infection, she is forced to watch The Cleanser, an ominous masked figure, brutally kill her mother and subject her to five torturous trials in order to prove she is practising witchcraft. 'The Cleansing' is a medieval horror film that will chill you to the bone.
Actors:
Luke Bailey, Rebecca Acock, Simon Nehan, Rhys Meredith, Simon Pengelly, Christopher Vowles, Sarah-Louise Tyler, Richard Tunley, Richard Burman
Directors:
Antony Smith
Producers:
David Shillitoe, Antony Smith
Writers:
David Shillitoe
Studio:
High Fliers Video Distribution
Genres:
British Films, Drama, Horror, Thrillers
Countries:
UK

Reviews (1) of The Cleansing

A kind of cross between a 14th century ‘I Spit on your Grave (1978)’ and ‘Witchfinder General (1968)’, this story finds wayward teenager Alice (a great performance from Rebecca Aycock) spurning the advances of Priest Tom (Rhys Meredith). Humiliated, he does his best to convince the small village that the girl is a witch and as such, has to undergo gruesome torture to prove her innocence (or not). Right there we have another example of an alleged man of the cloth using his position to behave in a most ungodly way. But he is not a monster, just a weak, pathetic man whose spite takes things beyond his control.

Alice is an enigma, played with real gusto. That she does not speak for a sizeable portion of the story makes it hard for the audience to decide if she entirely innocent, which is a decent red herring. Not so successful is the arrival in the midst of events, of a stranger (Luke Bailey). He comes and goes without ever affecting the storyline.

Alice’s journey is a slow-burner, but by the third act, enters into satisfying horror territory. Never overtly graphic, the scenes of violence and gore are successfully employed, and the characters – even the minor ones – are interesting enough for us to be invested in their (often grisly) fate. The title character is a good, powerful-looking monster, and he proves himself to be far more than the brooding killer you might expect him to be.

Kudos to all concerned at High Fliers Films for this good-looking, well made and powerfully played folk-horror project. I thoroughly enjoyed it. My score is 8 out of 10.