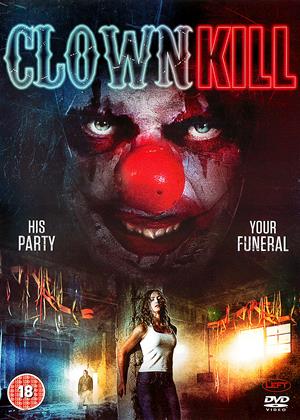 Jenny, or ‘Babes’ as she is often called (Jessica Cunningham), does not have a lot of luck as this film begins. Drunken, spiked and raped in the toilets of a club, hassled by a burn-scarred janitor Jennings (Stephen Greenhalgh) and victimised by boss John (Roy Basnett). The acting is extremely naturalistic, and the scenes are like eavesdropping on genuine work-related conversations. What lets things down at times, however, is the uneven sound quality which occasionally obscures dialogue. The feisty women in the advertising world are not to be messed with, and Boss John – mouth like a potty – is feeling the pressure too.

There is much humour here, a lot of it laugh-out-loud banter between the characters (especially the security nightshift George and Colin (Tim Paley and James Thompson)) - reminiscent of ‘The Office’ comedy (BBC, 2001-2003), which is no bad thing. Occasionally this balances nicely with the feelings of impending horror with what seems to be a killer clown in the locked-down offices – and occasionally it undermines the action. But I’ve a feeling that is deliberate. A familiar modern furnished office in an industrial estate is a remarkable sinister place when the night comes and 90% of the staff have (apparently) gone home.

In-keeping with the off-beat nature of the story, the ending could mean any number of things. The whole thing was Jenny’s drug addled dream or Boss John was dressed as a clown in a bid to incriminate Jennings (who is psychopathic anyway) … who’s to say? Whatever the outcome of the hyper finale, I had a ball watching this. Clearly it was done on a budget (the gore was never seen to stain the office location walls or carpets), but it remains great fun throughout. The pace rarely slackens and although the killer clown’s identity is pretty obvious from the first time we see him, this is a hugely enjoyable horror frolic.

As an avid horror aficionado (and a general movie fan), by now it becomes obvious to me that clowns should elicit both the feeling of terror, and the other feeling that’s everything but that. However, this doesn’t equal that fact that a certain director can take a clown, put it in a horror film, and expect for things to work on their own. It’s just not happening. Unfortunately, this is Clown Kill in a nutshell, and the fact that it’s a British production doesn’t change things a bit. Ladies and gentlemen, behold the review of Clown Kills.

Clown Kill is directed by Mark J. Howard and stars UK semi-celebrity Jessica Cunningham playing Jenny (who was six months pregnant at the time of filming). With all of that in mind, it’s really strange how Clown Kill turned out to be a dud.

The film mostly focuses on a young woman named Jenny (Cunningham), who, get this: gets sexually assaulted by someone (or something for all we know) posing as a clown. Then, Jenny returns to her office in a publicity company, where she is tutored by John (played by Roy Basnett), and works together with colleagues Katy (played by Katy Barsby) and Karen (Rachel Dargie). Then, things take a turn for the weird.

To make things worse, Jenny has made a recurring habit of being late lately, and so John gives her a warning and an ultimatum all at once; now Jenny has to complete a publicity kit for a client without any room for either deliberate or intentional (duh) errors. Jenny outright refuses this request on the grounds that it wasn’t her fault, and proceeds to exit the building – after which she gets attacked by the socially awkward janitor Cyclops (Stephen Greenhalgh). At this point in time, Jenny is very stressed but mentally sound, and so she decides to do the presentation anyways. And not only that, but Jenny works best at night (my type of Jenny), because at that moment in time there’s little to no distractions to work whatsoever. Naturally, she stays at the office with only two security guards and no one else. Clown Kill being a horror flick, it’s only natural that a killer clown enters into the building, determined to ‘reap’ everyone and leave no survivors in his killing spree. When the clown’s identity is revealed, Jenny’s world turns upside down and it seems as if only death can save her now.

Everything considered, Clown Kill is nonsensical, features no coherent narrative structure, and ends up being more a dull, aimless flick than a horror one at that. However, if you are very fond of killer clowns, and you absolutely MUST watch a killer clown on the prowl in order to get your horror fix, then Clown Kill would offer you JUST that.