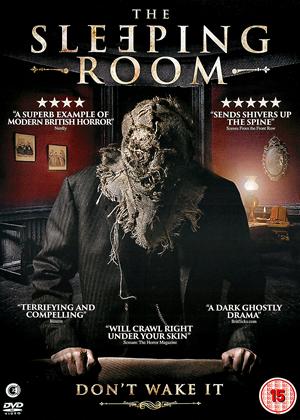 Synopsis:
In one of the most acclaimed British horror films of recent years, orphaned 19-year-old call girl Blue is sent to meet a new punter in Brighton, unaware of the horrifying impact it will have on her life. Blue begins to fall for the charms of her client Bill and also becomes intrigued by the grand Regency house he is renovating - a once infamous Victorian brothel. Together they uncover a secret room that harbors a shocking history of events relating to Blue's murky family past. A terrible supernatural force is about to be unleashed, awakening demons past and present in this terrifying gothic nightmare.
Actors:
Julie Graham, Joseph Beattie, Leila Mimmack, Christopher Adamson, David Sibley, Chris Waller, Lucy Clements, Billy Chainsaw, Mike Altmann, Nicola Colmer, Barry Kristopher Sullivan, Chrisanthe Grech, Antonia Northam
Directors:
John Shackleton
Writers:
Alex Chandon, Ross Jameson
Studio:
Second Sight
Genres:
British Films, Horror
Countries:
UK

Reviews (3) of The Sleeping Room

This film has been getting a lot of rave reviews from horror fans. I can only assume this is another example of Blair Witch Syndrome - if it isn't a hideously gory slasher movie but tries to scare you in a different, more subtle way, it's unfamiliar so it must be good. I can only say that, having read those reviews, I was deeply disappointed.

The best acting comes from Brighton itself, but since Brighton & Hove District Council footed some of the bill, I'm not surprised their extremely picturesque town gets plenty of screen-time, even though, strictly speaking, the story could have taken place anywhere. Certain other members of the small cast, especially the younger ones, will definitely not be returning to a screen near you any time soon, except possibly under a much better director. The script is riddled with clichés, the actual horrors are almost non-existent, and the direction is pedestrian at best. As for the music, I was genuinely surprised to see in the end credits that they didn't use library tapes because they'd run out of money, but actually paid for an original soundtrack that ends up sounding like predictably lousy 1980s made-for-TV dreck.

Almost nothing is made of the potential for the older local residents to remember bad things associated with a particular place, and of course it goes without saying that in over a century, nobody, including the police, ever found the really obvious secret room in a house associated with murder, sexual perversion, and numerous missing persons. This not only sounds but looks like something made for TV, and carefully pitched so that nothing too sexual or violent occurs onscreen (the one genuinely perverse shot is quite mild, and could be edited out with no real loss).

It does seem to be trying to attain genuine levels of gothic creepiness, but everyone involved needs to try much harder if they ever get another chance. Which, since this film cost very little and was kind of a hit, and they seem to be able to competently handle most of the technical aspects of film-making (other than non-clichéd script-writing and anything to do with music), they just might. Though given the blatant nods to certain other cult horror movies they feel obliged to include - in particular,"Phantasm" and "The Shining", though you may spot a few more - and the extent to which these fall flat, maybe they won't after all.

And seriously guys, what's with that ending!? Make up your mind! Unless you honestly don't know the difference between "writing a good script" and "leaving your options open for a sequel". Which I strongly suspect that you don't.

To me, an out-of-season sea-front is an ideal place for horror stories. Ever since MR James’ ‘Oh, Whistle, And I'll Come To You, My Lad’ perceived such a location as an isolated, ghostly, shunned arena for supernatural phenomena, it has amazed me the location hasn’t been utilised a lot more within this genre.

‘Sleeping Room’ makes excellent use of Brighton sea-front for such a premise, for both interiors and exteriors. The retro tackiness of some of the décor in various rooms conveys a nice suggestion of timelessness into which this somewhat standard story is set.

Of the cast, Joseph Beattie as Bill really impresses, transforming from being shy and slightly awkward, into a ‘The Shining’-style lunatic with great skill. Sadly, there is an occasionally lacklustre performance from scratchy voiced Leila Mimmack as Blue, who nevertheless comes to life in moments of tension. Julie Graham, David Sibley and Chris Waller provide excellent support.

The secret room in Bill’s new apartment carries ghostly remembrances of ‘Frisky’ Fiskin, a terrifying perverted murderer. It’s a fairly routine story given extra flourish by the director. It rushes through the events somewhat, leaving little time to dwell on the threat – especially during the climactic events.

Sleeping room ? , well it sent me to sleep ! - The Sleeping Room review by porky

Premise was good, sadly the production lacked greatly , Lead actress was a large part of the problem, she was as wooden as the floorboards . and her spliff puffing Friend was even Worse .

Lost my interest pretty quickly . shame because the story had some meat in it and the locations were perfect for the story ,getting it all on film however was far beyond the production company .

Personally i would give it a miss....