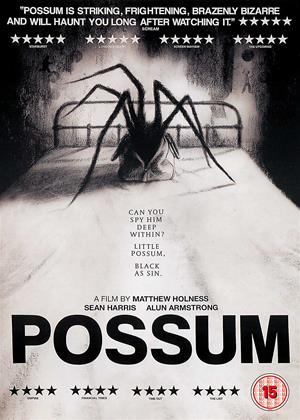 You might feel the need to shower after watching this - spoilers. - Possum review by NP

If it is possible to enjoy the journey while the destination proves disappointing, then ‘Possum’ is a film that works very well. With a leisurely, artistic directorial style reminiscent of David Lynch (especially moments of ‘Eraserhead’), the 90 minutes running time doesn’t exactly progress the story; it dwells instead upon the stifling atmosphere experienced by Philip (Sean Harris), a mentally challenged puppeteer as he returns home after some undisclosed discredit, to face the wicked stepfather (Alun Armstrong) who abused him as a child.

There have been many horror films in which a paper thin plot is spread over a powerfully shot and persuasively acted canvas. ‘Possum; fits very well into that category. What spices things up is the regular appearance of a spider-like mannequin with a human head, created by Odd Studios, which had designed many such effects for other films including entries into the Alien and Star Wars franchise. With that in mind, it is no great surprise that the creature is extremely effective, prompting writer/director Matthew Holness to keep it hidden for much of the time. In certain scenes, it looks like the prop it is, and at others – for example, when only the head is visible – it looks uncannily real. Its sporadic movements are very rare, but are onscreen enough to convince.

The creature’s reluctance to disappear, despite Philip’s continued efforts to destroy it, fuels much of the story, falling on the old ‘is it real, or in his mind’ chestnut. Even after the finale, when the inevitable twist is revealed, we don’t have an answer to the creature’s true state. What we are left with is a fairly predictable outcome, with the lead-up proving to be far more entertaining. A true nightmare on film, the scenery is nevertheless beautifully shot, giving such urban landscapes and rainy outposts a real sense of visual poetry and the acting is excellent. The grimy, abandoned, unwashed feel of the settings is palpable: you want to hop into the bath after the credits roll. The atmospherics are also given a real boost by the excellent, murky electronic soundtrack by The Radiophonic Workshop (using occasional musical cues by Doctor Who theme-music maestro Delia Derbyshire).

Yet another entry in the race to play variations on the child abuse theme.

This one comes across like an episode from the League of Gentlemen, so solemn and po-faced that it becomes laughable, especially with the reliance on a "spooky" electronic soundtrack to spice up the bleak visuals.

The terse, Pinteresque dialogue sequences merely add to the feeling of parody.

Would have made a better short - Possum review by AL

On paper, this ticked all the boxes: a plot that did not require an explanation; art house and slipstream. In reality it is a never ending series of scenes watching a bloke walk around with a bag with a puppet in it posing as a Harold Pinteresque play. The ending was sadly predictable. Some parts I am sure were unintentionally funny. It has been a long time since I have given a film one star, and I don't like doing it, but struggling to come up with any reason to give it two.

Pissom off - Possum review by porky

Creepy and Arty . But more like a piece of Performance Art/Experimental Art Film than Horror .

Disappointing by the end of it .as it felt like it was building to something better.

Passes as a BBC Style Christmas Ghost story Short Film. in a similar way that 'Whistle and I will come to you ' is creepy .

I couldn't bare to sit through it more than the once .it is just soo slow moving .

Closer to 'Eraserhead' than 'Alien' if a comparison helps .