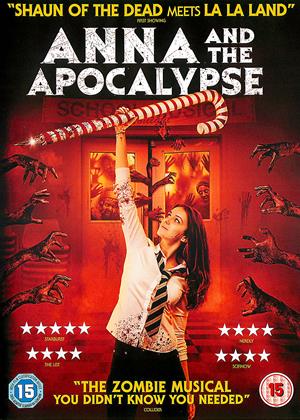 Reviews (3) of Anna and the Apocalypse

Its a musical! - Anna and the Apocalypse review by sw

It should really say in the write up that its a musical. I was pretty confused when they break out into song lol

Its well made, well acted. Good casting and effects.

But i really cant stand musicals which is not the films fault so cant really complain to much.

If you want a light harted zombie musical with gore then im sure youl enjoy this as its all done very well.

If your not a musical fan but a die hard zombie fan then probably dont watch.

Zombies again? Dancing and singing not so much… - Anna and the Apocalypse review by DS

Little Haven, Christmas, a zombie virus is slowly sweeping the country and those that don’t prepare and fight back will end up zombies themselves. Only singing and dancing can save the day..sort of.

With a small-town setting, so all of the action is localised and personal, no wider world building here apart from some quick radio updates, and mainly in and around a school this film perfectly allows the cast to be young, full of energy and verve. This is clearly what you need for the song and dance routines and I have to say as no big fan of hoofing and jazz-hands, it works.

This type of film must rely on it’s cast and in this case, the delightful Ella Hunt and Malcolm Cumming absolutely smash the chemistry test as they interact on screen and rather pleasantly are just friends in the story, no romance. Ably supported by the wacky Sarah Swire as Steph North and other ‘friends’ from school the film sets out is stall early and you either quickly buy into it or it will leave you cold. For me it worked. I laughed and enjoyed the song and dance numbers that were full of energy and fun. The young cast are helped along by long-time British stalwarts Mark Benton and Paul Kaye who also give their pipes a working out over the course of the story, Benton I did not know about by I have seen former Dennis Pennis Kaye taking centre stage in the muscial production of Matilda at the RSC a few years ago.

The zombie side of the story is the what the makers hoped would be the catch and I understand this and applaud it as a brave move, I’m guessing the famous episode of Buffy the Vampire Slayer would have been an early influence, where horror and song and dance could surely not mix but do.

The zombie plot, in all honesty, is slight and to my mind seems incidental, its not, and also what actually bogs down the movie as it goes on – people die, which some see as good point and others might not as it takes away from the comedy but the more the zombie plot plays out the more it holds back the film like a big undead anchor. The film starts to slow down at the midway and before the nihilistic open end, it had started to outlive its welcome. I just about held in there to end but may attention wandered.

The location’s in Scotland give the film an authentic real feel for UK viewers in particular and is another plus point for this odd film. The acting and performing from everyone is top notch and fun and overall this is a great interesting film to be added to the zombie pantheon.

Yet the nagging feeling I get overall is that this would have made a better hour-long special movie on say Channel 4 than a full-length feature film.

Overall its a winner though and it’ll be interesting to see what director John McPhail and writers Alan McDonald and Ryan McHenry come up with next. I’ll be looking out for it for sure.

Enjoyable, light musical about Christmas at a school. The loss of a parent and abandonment. Clinging onto the need for relationships. Some nice catchy songs and a Zombie apocalypse. All in all I found it enjoyable and other than some dreadful over the top acting by some of the more experienced actors. A delightful waste of an hour and a half.