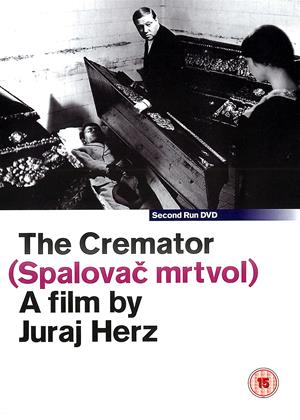 Reviews (4) of The Cremator

From the opening montage intercutting caged animals at a zoo with the humans observing them this is wonderfully assured and audacious cinema. The performances are chilling, the bleak, sharp visual style adroitly suited to the theme of the mundanity of evil, culminating in the efficiency of the Nazi holocaust. For me though, it is the remorselessly disorientating momentum of the editing that confirms this as one of the great works of the 1960s. How tragic that the Soviet invasion of 1968 killed such creativity.

The Smile of Evil. - The Cremator review by NC

We gradually discover that Kopfrkingl is not the faithful, virtuous citizen he'd like the town to think he is. He visits brothels and has regular VD check-ups, whilst boasting that he never touches anyone but his wife ("my angel"). He's miserable when people are happy at the funfair, but practically coos with pleasure at the gore of the waxworks. There is nothing fundamentally wrong with the cremator thinking his work helps to free souls from an imprisoned body - according to him it says as much in the holy book of Buddha. But the film follows the steps taken from that position to the madness of Kopfkingl considering himself the next Dalai Lama for performing the beneficial service of cremating thousands of people in mere minutes, freeing all those souls.

Rudolf Hrusinsky is remarkable. Oily and banal, arrogant and dishonest, it takes only a drop or two of poison in the ear to turn him into a Party member of the invading forces, and become the cremator-in-chief.

Some of the surrealism and rapid intercutting is a little disconcerting, especially at the start of the film (it's no surprise to learn that Herz worked with Svankmajer) but there is real style in the way in which one scene slides into the next without the viewer realising for the first second or two that it is a different time and place.

It's the blackest of black comedies. It's the creepiest of noirs. I'll never again be able to see the smile on a Buddha without also thinking of the cremator's insidious grimace.

Brilliant and relevant to today - The Cremator review by TE

A remarkable satire on the darker aspects of human nature.

It's a film that comes across as rather disjointed in the first sequences, but it gathers pace and power as it goes along. When it ends it pays to go back to the start to appreciate the narrative in the light of what you know by the end (hope that makes sense!).

Ominously relevant to the world right now, sad to say.

From Cradle to Flames - The Cremator review by CH

How do people emerge into the world, soon enjoy playground games and encounters, and yet, within two decades, have tossed aside teddy bears and dolls to relish destroying others - and on a large scale?

Perhaps the answer rests in those playgrounds. Factions and favourites form, the unfortunate are cast into infant exile. Such thought is prompted by Juraj Herz's The Cremator. Somehow this Czech film was made in 1969 but, inevitably, swiftly vanished, and has only become known again here this century. From a novel by Ladislav Fuks, it depicts the life of a man (Rudolf Hruninsky) who gains control of the crematorium in which he works - premises which inspire in him cod-philosophical notions about restoring the corpses, all ashes being equal, to their place in the Eternal Circle. As one might say, the Lord of the Manor becomes tomato fertiliser, and is none the worse for that.

All of this makes carefully combed-over Hruninsky vulnerable when the Nazis arrive and seek his help in disposing of those deemed unhelpful to the cause.

Such a summary, accurate as it is, can scarcely do justice to a film which transcends its subject. Many are the film techniques deployed here - voice-over, jump-cuts, montage, swivelling camera to catch a chase in confined quarters. In some ways, with a glimpse through an oven's window (all this is in black and white), this appears realistic but the light and shade form a journey into a man's mind, those cliffs of fall (in Hopkins's phrase) which can infect a nation.

As such, this is not a horror film but one redolent of Conrad's phrase about a mental void, “the horror, the horror”.

A swift and terrifying ninety minutes in which anybody, without a change of guise, can become a monster.