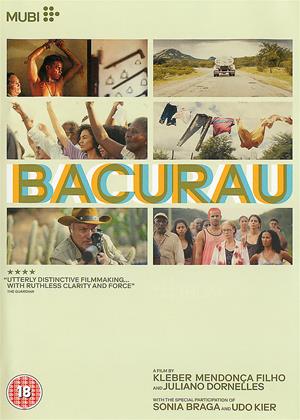 Partly in Brazillian-Portuguese and partly in English, this genre-straddling movie is a mishmash of arthouse slowburn, atmospheric and faintly futuristic Western and violent grindhouse/exploitation.

Bacurau is an uber-rural fictional hamlet in northern Brazil, partly tropical, partly in deserty scrub land, where everyone knows everyone else. The whole village sharing a sense of civic pride, embodied by the local museum (any visitor to the place is asked by one of the population if they've been to it). One night, Bacurau awakens to a group of horses running through the streets, set loose from the local farm. It's an omen for the arrival of some outsiders who are going to change the face of the place forever in a most violent way.

The movie can take its time but is punctuated with surprises - from Udo Kier's otherworldly extended cameo to what the locals shockingly watch on TV. The stylized blood and murders (which gradually stack up to a grimly impressive bodycount from about a third of the way in onwards), may put some off - but this is a unique and visceral world cinema curio - with shades of everything from Deliverance, Sergio Leone to the surveillance and allegorical themes of Michael Haneke movies.

"It's only the beginning!" - Bacurau review by TE

An extraordinary film! The sheer boldness of the mixture of genres makes for absorbing viewing: one minute we are in an arthouse-style depiction of a remote rural community, the next we are in a western gangster brew of violence and nihilism.

The film doesn't always flow smoothly between these poles, but that is also part of its charm. It keeps the viewer on her toes!

There are moments when we wonder if it is going to go down a 'magic realism' route, but what appears to be a flying saucer is swiftly identified by an elderly villager as 'a drone'.

There is clearly a political allegory involved. Could the crooked mayor be Bolsonaro, and the vicious American mercenaries be the US support for the murder and rape of the Brazilian hinterland? The answers are: yes, and yes.

There is a folksy Tarantino-style catharsis at the end, but mark the final words of the mercenary leader.

The first half-hour plays like a sociological documentary about a backcountry Brazilian village… then a drone appears and soon the villagers are battling an attacking force. The promo material bills it as sci-fi but there’s no sci-fi in it – it’s a glorified political allegory.

It’s nowhere near the fun ride that some reviewers would have you think it is. It’s far too long in the build-up and the final confrontation is a damp squib. But its main fault is that there’s no emotional engagement with any of the characters so that we don’t care about their fate. And if you watch the tell-all trailer you’ll be even more disappointed. Nevertheless, and with an eclectic soundtrack, it’s probably different enough to make you keep watching.

Given the number of good reviews written about this film, I need to start by saying neither my wife nor myself suffer from attention deficit problems. We're just as happy as the next to enjoy foreign dialogue,  lingering sunsets, great cinematography,  the slow-burn build of developing characters and genre blending. These need to be part of a compelling narrative, however, and this film took an awful long time to reprise a plot that mashed up ethnographic detail and full on violence; a combination that has been done before. I could have happily toddled off, made a two course meal, come back, sat down and still feel time was dragging. There are some good performances (hence the star) and the kernel of a good idea that, better executed, would have produced a compelling film. Kernel got trodden on.

There is violence, normally I don't like that but...this was a masterpiece. Both as a spine chilling consideration of what the future might look like for poor people and sadistic rich people and probably what Brazil already looks like for many under Bolsanaro. It ends with a fantastic twist on the 7 Samurai. I was gripped from beginning to end, and yet 'this is only the beginning'

A really strange mix - Bacurau review by BE

An extremely graphic depiction of violence, weird scenarios and peppered with some black humour.  You name it, it’s got it, interspersed with an attractive intermittent soundtrack.  It could have been a directorial liaison between Sergio Leone and Quentin Tarantino. Some of the violence was turn the head away stuff. Not my usual choice of movies to watch but it certainly held my attention. It was extremely well crafted and very well acted by all of the cast.  If you watch it, see if you can spot the continuity error in a house towards the end where a member of the film crew  could be spotted scuttling by in a far off room almost, but not quite, out of camera range!  Recommended if you can stand all the gore associated with being shot and dismembered bodies (whereby it is a wonder that it didn’t precipitate a shortage of tomato sauce)!

Not good - Bacurau review by JG

This umpteenth reworking of The Seven Samurai is just plain nasty. If pointless blood-baths it you thing you might enjoy it, we didn’t.

Directors Juliano Dornelles and Kleber Mendonça Filho take aim at grindhouse grit with Brazillian bullets. On the surface, Bacurau may sound like the familiar tale of one town banding together to beat back on a murderous band with intimidating size and brutality. But there’s far more present within a film that mashes so many genres and tones into a pleasing casserole of culture, politics, morality, and extra-juicy violence most bloody.

Bacurau exists as a small village in the dusty Brazillian wilderness. Though there is the tech of computers for education and a giant screen mounted to a truck for entertainment, the town is quaint and rich with culture. We arrive in town just as one of the matriarchs of the town has passed and a funeral is underway. They bury the dead with great sadness but also celebration and joy for the life they enjoyed with such a woman. Even the bitter doctor of the village soon recants her harsh words when realizing the importance of her people, despite most of her job involving offering beds to the kicked-out husbands and easy advice for the hungover.

But then strange happenings start occurring around the town. The phone signal drops out. Horses from neighboring farms are running wild. The town itself can’t be found on any satellite map. There are even UFOs seen within the skies. Once some unorthodox tourists stroll into town and now there are some murders abound. What could be causing all this chaos?

It doesn’t take a genius to deduce that this may have something to do with a corrupt politician who occasionally drives into town. He refuses to take down a dam that denies them water and tries to excuse away his actions by dumping off tattered books and expired food, believing he’ll be seen as more benevolent. We, as the audience, learn quickly, however, that all of this is being orchestrated by a band of mercenaries. Really, really bad mercenaries. The kind that thinks little of killing innocents and have sex right on the scene just to get off on the thrill. They’re mostly white people from out of the country and think nothing of gunning down natives who they work alongside. They overreact, over-kill, and take overt pleasure in their job to gross degrees that there’s little empathy for these antagonists. This is especially true when one of them kills a kid, trying to excuse it by accident, and the one voice in the group who finds an issue with such a kill is threatened violently.

The film consistently tries to surprise at every turn for how it portrays Bacurau, it’s people and their enemies. The town has many traditions but also a frankness to their desires. Sex seems to come almost on demand for most of them and it’s so frequent throughout the village that adults attempt to distract children with music while audible lovemaking occurs. Scenes that are just too surreal to describe crowd the screen, echoing everything from outlandish 1980s dystopia to Alejandro Jodorowsky levels of weird. When the townsfolk finally start fighting back in the gory third act, there’s something so wickedly wild about the first killers being a couple completely in the nude wielding shotguns. There are also drugs involved just in case there wasn’t enough craziness going on within this place.

Bacurau kept me guessing with every scene. Brilliantly balancing tongue-in-cheek humor with over-the-top grit is a potent mix, giving off sublime sensations with all its somber contemplations on living and it’s overblown kills of blown-off craniums and decapitated heads. It’s rare to see a film this uniquely unpredictable and all the more refreshing that it has an angry message coursing through its vivid veins of excitement.