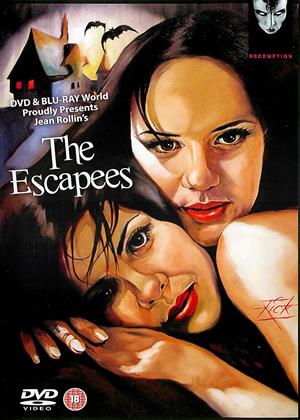 Reviews (1) of The Escapees

Marie (Christiane Coppé) has an incurable inability to communicate with the outside world, and has been in care on three separate occasions. We first see her sitting in isolation, rocking to and fro forlornly in a chair in the misty gardens of a stately asylum. It’s the classic, haunting type of scene French Director Jean Rollin excels at. Curiously, Marie begins a rapport with fellow inmate angry, loud Michelle (Laurence Dubas), and together, they plan to escape from the institution. Once again, Rollin’s predilection for a young female duo as main players comes into play here. The two girls instantly find comfort in one another, their more tender scenes illuminated by Philippe D’Aram’s melancholy score.

To steer Rollin away from his favoured theme of supernatural horrors, Jacques Ralf was drafted in to co-script the story, much to Rollin’s discomfort. Unusually, some of the more ‘talky’ scenes were cut by the director, who usually refrains from cutting much at all. We are still left with a wordier storyline than we’re used to. Long considered a lost film, it was with great anticipation the eventual project was found – and it is that reason more than anything else that ‘The Escapees’ has not enjoyed great acclaim among Rollin aficionados: the hype put the film on a near-impossible pedestal.

Two increasingly disillusioned girls meeting a disparate band of other disillusioned people: dreamers, outcasts and drifters. This may not make for the most scintillating narrative, and some scenes do drag, but ‘The Escapees’ contains more than enough Rollin-esque touches to keep me happy. Equally, the oppressively drab, unfriendly, rainy, cold darkness of many of the locations still somehow comes across as being strangely poetic. Regulars including Natalie Perrey, Louise Dhour (“Sometimes it’s better not to know what your immediate future holds,”) and mighty Brigitte Lahiae (and Rollin himself) are reassuring just by being there, even if their characters are further examples of the kind of people and societies the two girls are trying to escape. The hopelessness of their ambition is compounding by a very sad finale which seems nevertheless to be tragically inevitable.