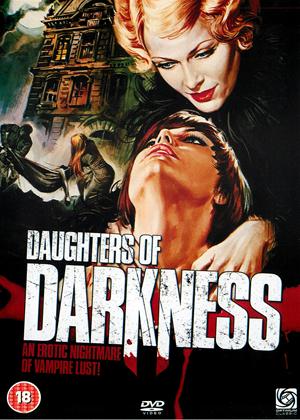 Reviews (4) of Daughters of Darkness

No fear! - Daughters of Darkness review by CP Customer

Pretty bizzare foreign Vamp with amusing dubbing and pretty odd plot but just about kept me interested to the end. No need to leave the lights on for this one as not the slightest bit scary.. although whoever wrote is must be pretty scary!

Kitsch but fun Euro-horror. - Daughters of Darkness review by Steve

Sort of a Hammer art film, but Belgian. Slow, but engrossing. Trashy, but stylish. And sexy too. Namechecks the Elizabeth Bathory legend used in Countess Dracula.

The naked female vampire has bikini marks. But it's nice to know.

They are staying the same hotel is the magnificent and sensual Countess Bathory (Delphine Seyrig), who the desk clerk swears stayed at the hotel forty years earlier and has not changed at all, and her ward Ilona (Andrea Rau). Worryingly, there is a spate of killings around the district, the perpetrator untraceable.

Director Harry Kümel deliberately styled Delphine Seyrig's character after Marlene Dietrich and Rau's after Louise Brooks, the leaning to such genuinely iconic style pays dividends because the two figures are striking and make an impression before they have even spoken.

As is often the way in the chic European horror films, the locations featured are absolutely stunning. Most of the story place inside the splendid (and yet more than slightly oppressive) Hotel Astoria, Brussels, which lends itself beautifully to the moody timelessness of the piece – even if the Countess does describe it as ‘a caravan!’ Equally, the pacing is typically leisurely, allowing us to become immersed in the theatrical nature of the titular characters and their world. ‘Daughters of Darkness’ is very similar in style to ‘The Hunger’. Whereas the 1983 film has been slated for ‘style over content’, this is hailed as a classic. I’m not sure why such double standards should exist.

When Stefan does finally telephone his mother and tell her of his marriage to Valerie, ‘she’ is revealed to be a flamboyant, elderly man – possibly Stefan’s boyfriend. After that, Stefan – until now merely volatile – displays violent, resentful behaviour to his wife. Things don’t end there. The Countess seduces Valerie and prevents her from leaving, and Ilona falls for Stefan, telling him she is ‘afraid.’ She has good reason to be, for during a sex-fuelled altercation in the shower (caused by her aversion to running water, which Bathory seems unaffected by), Ilona is killed. Not long after his behaviour spirals, Stefan is also despatched.

There is a theme of red running (literally) throughout. Lipstick, nail varnish, costumes and sporadic gouts of blood; sometimes scenes fade to a strangely warm red before the next, reverting to contrasting cold blue colours, begins.

As Valerie and the Countess speed through the night to escape the coming dawn (‘Faster, faster,’ purrs Bathory), there is, inevitably, an accident in which both appear to be spectacularly killed...

… except three months later, Valerie, speaking with the Countess’s husky voice, appears as well as ever and indulging in her usual exotic lifestyle. Fade to red one final time.