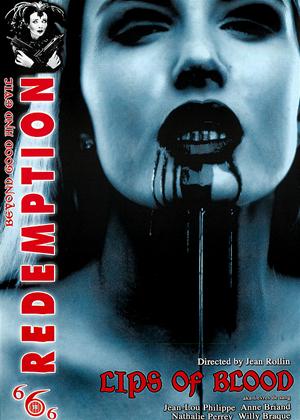 Reviews (1) of Lips of Blood

Jean Rollin describes this as his best written film, but not his best screenplay. The reason for this is that a week before filming commenced, one of the producers decided not to be involved, and withdrew his funding. This meant that instead of four weeks filming allocation (already a pretty tight deadline), there was now only budget for three.

So it is a surprise that this is as good as it is – and it is very good! It isn’t flawless, of course. The vampires, although very effective, backlit in the distance, traces of blood on their lips, lose their effectiveness when close up due to the outsized fangs being a little too large (a common problem in Rollin’s films, but not his first, ‘Rape of the Vampire’, in which the fangs were more subtle and effective) causing the actresses to appear to smile to reveal them.

Also, at the end, when two vampires encase themselves in a wooden coffin that goes floating off to sea, it is worth remembering that running water is deadly to such creatures, so the hope is that the coffin is sealed. And yet I regret criticising that, because – as with all films by Rollin – the whole project is written and directed as a kind of dream-like fairy-tale, not bound by the limitation of rules, even vampire lore. Indeed, the scene at the end, typically filmed on ‘Rollin’s beach’ is one of his best known, and is poetic and effective even now, fusing perfectly ‘the beauty of obscenity’.

So too, is the death scene of the Castel twins (featured on much of the accompanying merchandise). Despite being well known to fans of Rollin, Marie-Pierre and Catherine only appeared in two horror films together. This isn’t quite as effective use of them as in the earlier ‘The Nude Vampire’, but they are still seductive and mesmerising and ethereal and sinister, all at once.

The central performance by (co-writer) Jean-Loup Philippe as Frederic is very strong. Indeed, ‘Lips of Blood’ features one of Rollin’s strongest casts. Frederic’s ultimate decision at the film’s close is a satisfying twist and once again successfully blurs the line between ‘good’ and ‘evil’, much as ‘Dracula’s Fiancee’ did 27 years later.

The locations are stunning and lovingly shot. The camera lingering over the enticingly-lit castle, or the ramshackle (and soon to be demolished) shopping arcade, with the (presumably dubbed) sound of whistling wind and thunder, accompanied by eerie flute music, is as atmospheric as anything from a big budget extravaganza. Kudos, also, for doing something very rare in vampire films (especially at this time) – actually using real bats. If this hugely impressive picture was done with a truncated budget, I truly wonder what could have been achieved were Rollin fully funded.

Alongside ‘The Iron Cross’, this was the French director’s least successful picture. Agonizingly, to bring it into profit, Rollin re-edited his work, adding scenes of a pornographic nature and renaming it ‘Suck me, Vampire.’ Yes, truly. Needless to say, the new version was a lot more profitable.