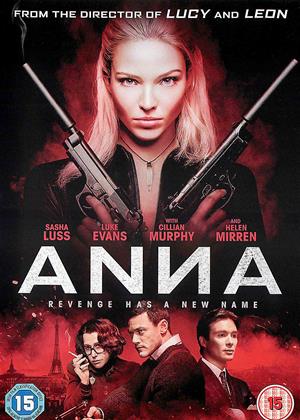 I Work For the KGB, Baby! - Anna review by BG

Luc Besson is back in NIKITA territory as assassin/model Anna works for Luke Evans (KGB) and Cillian Murphy (CIA), taking both to bed and killing for each. What she really wants is "out", as assassins end up getting assassinated, but it isn't going to be easy. With Moscow, Paris and Bahamas locations, this is a well made slick thriller, a bit comic-strip, not up there with LEON, but has some nice twists. While I admired blonde-haired Anna in action (Sasha Lust?), fighting and killing in her black stockings, Helen Mirren, a spectacled, grumpy, aggressive, cynical, Rosa Klebb-like KGB boss, steals the film.

With Luc Besson writing, directing and even holding the camera, you know you’re in for a film that’s going to zip along cinematically, with visual interest in every frame. This one harks back to Nikita, with model Sasha Luss as a Russian government assassin. The elliptical plot constantly surprises with twists that make no sense until Besson backtracks to reveal what’s really going on. His intention (as he says on the DVD Extras) was for the plot to resemble a nest of Russian dolls, which are revealed one by one.

Given that, there’s nothing here we haven’t seen before, with an indestructible hero/heroine fighting insuperable odds. If only Besson could invest more in character he’d be making brilliant films. This one is instantly forgettable, with a lead actress who should stick to modelling, but it’s bold, brash, beautiful and great fun to watch. After watching the current crop of British social-realist films, mired in miserabilia, it’s a pleasure to sit back and wallow in a film made by a director who’s in love with the visual possibilities of cinema.

Luc Besson's status has definitely dropped over the past few years, with a succession of euro-set thrillers offering little in terms of substance. This would appear to be the same but a more twisty storyline makes this more interesting. Sill not reaching the heights of Nikita or Leon but a step in the right direction.

Bonkers - Anna review by Other Worlds

Sasha Luss is undoubtedly a very beautiful woman , and this is important as it makes it easy to keep watching what is otherwise a completely preposterous and bonkers movie.

An actress who looks like she would have to work up a level of anger to find the strength to break a breadstick is somehow able to massacre (no other word is appropriate) a horde of opponents and not just not once but time and time again. It is perhaps just as well the story has a fragmented timeline as otherwise the holes in the over complicated script would be all the more obvious .

Watch it, have fun, but don’t whatever you do expect anything anything other than a live action cartoon.

Too much time jumping - Anna review by Chris

This would have been a great film for me, but the random time jumps and repeated scenes spoiled it. There seems to be modern trend towards more and more time jumping to make plots seem to be more complex than they really are.

I always try to finish a film but this one tried my patience. It's difficult to pinpoint whats wrong with it but something is, it just doesn't work, the action sequences are superb, the talent of the actors is unquestioned but it just doesn't flow, it's like watching a series of clips on Youtube. Such a shame, I feel there a good film in there somewhere.....1 out of 10 Mr Besson, see me after class.

Not as bad as expected - Anna review by RD

I was surprised to find this had got into my rental list, it sounds trivial from the description and the reviews support that. Maybe it was the lure of Luc Besson that put it into my list.

It's trite and very superficial, with plenty of very silly action sequences that exude blood and bullets and great choreography if nothing else. This is the danger of tarting up death and violence to be portrayed as nothing deeper than a dance sequence.

The plot is quite well strung together, I had no problems with the regular time shifting, "3 years earlier" shortly followed by "2 years later" and so on as it all seemed to make sense. Acting is very poor but hey, with all the action and the cute models, who's interested? Filming and sound is excellent and the music track is good also.

All in all a film that ends up not as bad as you'd expect, and if it's a cold day and it's raining outside, it's good enough to fill the time until the weather clears.

Continuity alert: in the all-action escape scene from the KGB headquarters, watch out for the star's stockings that turn into tights then back again to stockings. The magic of cinema.