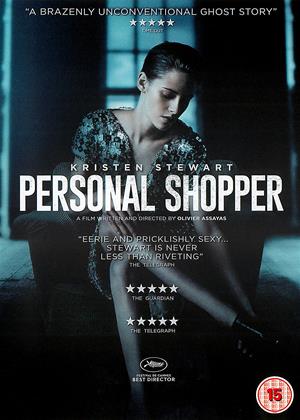 Few directors are as inept with both actors and camera as Oliver Assayas. See my review of his Les Destinees Sentimentales. Personal Shopper is almost as bad as that and his other borefest Clouds of Sils Maria. This attempt even won the director’s prize at Cannes, which is an affront to cinema and surely a Gallic joke.

Right from the long opening scenes of Kristen Stewart wandering silently around an empty house you know you’re in for a long haul. Another long tedious section has her conducting a conversation by that most cinematic of devices: text messaging. Nothing of note occurs. Kristen does some shopping and waits for a sign from her dead brother. There’s a final static 3 minute shot. The End.

The acting, as in all Assayas’ films, has no life. Kinder critics call it subdued or understated. It’s as though a dead hand has been placed over all emotion. Assayas is simply in the wrong profession. Somebody please stop him attracting finance and giving arthouse cinema a bad name.

I didn't get on with Clouds of Sils Maria but thought i'd give this a go. The film basically has two stories - maureen's life as a personal shopper for some kind of fashionista that we never hear much about, and maureen's other life as a self-styled medium trying to make contact with her deceased brother. Almost nothing is done to tie these two elements of the film together, and neither are explored in any depth. The dialogue is clumsy, there are a few instances of CGI ghosts which are laughably bad, Kristen Stewart's turn as the lead is never entirely convincing, and the less said about the final scene, the better.

Scruffy, intense Maureen (Kristen Stewart) is personal shopper to high-profile celebrity Kyra (Nora von Waldstätten). She wanders unconcernedly through magnificent Parisian and European streets, taking long journeys to spacious shops that sell ridiculously over-priced clothes. Occasionally she feels she is visited by the spirit of her dead twin brother Lewis, who died from a heart defect she also suffers from. This doesn’t dissuade her from smoking though!

She spends a lot of her time alone in Lewis’s former massive, shambling house which proves the perfect place for a haunting. Only two small problems – firstly, it begins to dawn on her that this un-benign spirit might not be her brother. Secondly, the CGI used to show us the apparition, although subtle, is a bit … CGI. Computer cartoon. This is surprising as other, much more subtle effects are expertly handled later on.

The acting is suitably detached. All hesitant and stuttering, awkward and halting, with characters talking over each other. This seems to be an artistic decision, Director Olivier Assayas apparently wanting the demonstrate Maureen’s sense of stylish isolation in this way: it does make some of the dialogue difficult to make out.

After a series of text messages from a stranger, who Maureen believes is her brother, she begins tentatively to break the rules of her employment and wear some of the garments she has procured for Kyra. Clonking around the spacious apartment in haute couture and high heels feels (and looks) alien to Maureen.

It’s difficult to know where this is all heading.

And suddenly, returning to Kyra’s flat after more personal shopping and finding her employer gruesomely murdered, things instantly become very frightening. The addition of strange violent banging sounds somewhere inside don’t help ease Maureen’s nerves, and shortly she is being interrogated by the police. What happens isn’t clear, but it seems to me that Lewis IS the mysterious texter: he appears to help her trap the real killer, Kyra’s former boyfriend Ingo (Lars Eidinger).

Now free, Maureen goes to visit boyfriend Gary (Ty Olwen) in the mountains. Once there, she is again confronted by the ghostly spirit who communicates with her.

‘Personal Shopper’ is a film designed to attract extreme views: you’ll either love it or hate it. I loved it, but I can sympathise with those who complain about drawn-out scenes watching Kirsten Stewart texting. There is a lot of that, but I had no problem with it. As much as anything, I enjoyed the vast, panoramic shots of various cities and locations; there was a definite comparison between Maureen’s self-contained world and the hugeness of everything outside it.

It’s a long ‘un: 105 minutes - and it moves very slowly. I have a love for this approach to horror films anyway, and so would strongly recommend it. You could get gloriously lost in Maureen’s strange world, but you have to give it a chance.

really slow and rather tedious - Personal Shopper review by OP

Very unsatisfactory film. Very dark (as in difficult to view), lots of mumbling by the lead actress (so difficult to hear). Relies a lot on texting which is difficult to fathom. Ridiculous storyline. Overall not a great film

Not really worth reviewing - Personal Shopper review by CW

I cannot really understand why this movie was made. Surely it was expensive. The plot is lame, the actors are just marking time. Kristen Stewart seems to have come from the Nicole Kidman School of Acting, the emotional range of a porcelain sink. I think of absolutely brilliant movies made on a tiny budget in other countries and wonder why anyone thought that this was worth filming and releasing.

And I don't enjoy movies about the supernatural, with a very few exceptions such as The Sixth Sense. For me, any director who thinks he has the skill to create real suspense and say something original about our lives by making use of supernatural themes is likely to fall far short of expectations. I enjoyed The Clouds of Sils Maria. It was atmospheric, the characters were interesting and it had a strange mystery whereby a key character suddenly disappears without explanation. Here, director Assayas is offering a dreamy ambiguous mystery with a few implausible and irritating props - the cross on the wall, the interminable exchange of text messages with someone who could be a ghost or a stalker (but either way, if you display your fear you only encourage them) and the floating glass tumblers that suddenly fall. I think Kristen Stewart is a superb actor, but this isn't a good use of her talent. At the end of a movie like this, you'd want to be left with the feeling that you have learned something new or interesting about people or about the human psyche. I didn't think this movie supplies that.

I won't say too much about the plot, which other reviewers have covered well.

I found Kirsten Stewart a competent enough actress but with that hoarse mumbling voice could hardly understand more that 15% of what little dialogue she delivered. For the first 20 minutes really nothing much happens, and then the plot does start to become quite intriguing for a while, hampered by the mumbling. However, that much of it is in text messages is a real boon! - and one can tell a little of what she is saying from the context and replies from other actors. How did she become so popular? I don't know about her other films as I've seen none of them, but in this there are a couple good near naked sequences with no body double, so the men amongst us might at least find something of interest.

Otherwise, it is ultimately an unsatisfying film and as the plot unwinds, one does have a fateful feeling that it is going absolutely nowhere. And the feeling is correct - there is no reward, no payoff for the pain endured.