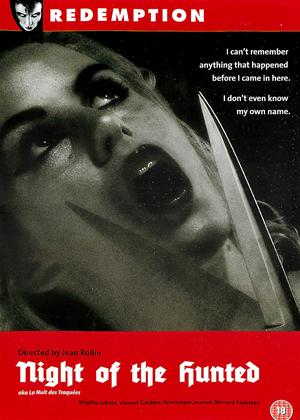 Synopsis:
A man driving home is suddenly confronted by a woman (Brigitte Lahaie) in a nightdress running wildly in the road. He stops to help her and finds that she has no recollection of who she is or why she is there? He takes her home and they have sex but it also apparent that she is very ill and rapidly loosing her memory. He traces her immediate past and finds that she has escaped from a sinister building known as The Black Tower where local people accidentally exposed to nuclear contamination are being taken...
Actors:
Brigitte Lahaie, Vincent Gardère, Dominique Journet, Bernard Papineau, Rachel Mhas, Cathy Stewart, Natalie Perrey, Christiane Farina, Élodie Delage, Jean Hérel, Jacques Gall, Dominique Saint-Cyr, Gregoire Cherlian, Jean Cherlian, Alain Duclos, Jack Gatteau, Cyril Val
Directors:
Jean Rollin
Producers:
Monique Samarcq
Writers:
Jean Rollin
Aka:
La nuit des traquées
Studio:
Salvation Films
Genres:
Classics, Horror, Thrillers
Countries:
France, Classics, Horror, Thrillers

Rent other films like The Night of the Hunted

Reviews (1) of The Night of the Hunted

Mild spoilers follow ... - The Night of the Hunted review by NP

French director Jean Rollin tries his hand at a David Cronenberg-type horror/thriller set, for the most part, inside a massive clinic, wherein the patients are all suffering from some sort of mental relapse where they remember nothing about themselves. The idea of an ordered society collapsing into chaos puts me in mind of JG Ballard’s ‘High Rise’ story.

Here is an environment where just about every awkward and uncomfortable bout of spontaneous sex results in graphic death, giving us the chance to witness more nudity than usual for a Rollin film, and moments of genuine shock/gore.

After a strong beginning, the film becomes a series of events featuring characters we don’t ever get to know, which causes the action to drag without the audience being allowed to care aboutwhat is happening. Elizabeth, who has escaped only to be recaptured, is pursued by Robert, who initially discovered her (and her friend Veronique) wandering along a country road in the beginning of the story. In turn, they are pursued by the clinic’s officials.

“I want them alive,” one of the guards shouts to his three men, as they fire several bullets at them. Like ‘Killing Car’, this is an environment where just about everyone has a gun.

It’s a story that offers little hope for the characters. Those who don’t end up dead have their minds wiped once again (the female vocal music that sweeps in at moments of intensity is illusory and highly effective). The Government are behind events, unsurprisingly, and hope to cover up the experiments to avoid a scandal.

The outside views of the tower blocks and various areas of Parisian industry, shot in characteristically cold colours suggesting dawn or twilight shoots, are often accompanied by (what I suspect to be) chill wind sound effects and prove that once again, Rollin is a master at creating unsettling atmospherics in familiar looking places. The finale, with Elizabeth and Robert slowly walking away, hand in hand, high above a landscape of tower-blocks and industria, is a typical example of understated Rollin beauty. A deceptively simple viewpoint it made haunting and plaintive. With the film’s preoccupation with indoor locations, impressive and austere though they are, we are robbed of much in the way of such poignant imagery, which is why ‘The Night of the Hunted’ is not my favourite Rollin film (although it possesses a nicely unsettling atmosphere throughout) . Pornographic actress Brigitte Lahie acquits herself very well with the demanding role of Elizabeth, but again, her pouting good looks rarely fail to remind me she is acting; she doesn’t quite possess the natural unearthly lure of Le Masque de la Méduse’s Marlène Delcambre, Little Orphan Vampire Isabelle Teboul or the Castel twins.