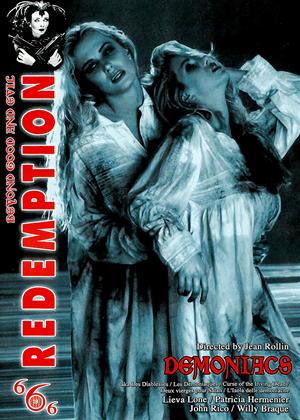 Not released
Nude for Satan

Reviews (1) of The Demoniacs

I would usually describe the Jean Rollin films I have seen as ‘delightfully strange’. Despite the nudity and seductive nature of evil on display, they also have a kind of perverse innocence to them. No quite so much with Demoniacs.

Introducing the main characters in the opening credits, we get to know The Captain, Le Bosco and Paul are wreckers, Godless men who lure ships to the rocks and then plunder the wreckages. And there is also the voluptuous Tina, who enjoys great amusement at the deadly antics of her three friends/lovers.

[Plot spoilers]Two young blond women who survive the latest crash stagger, bedraggled onto the beach where the wreckers are up to no good. They ask for help but are instead repeatedly beaten and raped. After this, they escape the wreckers and enter into a kind of relationship with a human demon trapped in the picturesque ruins of a hidden city. The power they are given as a result of this allows them to appear to haunt the wreckers and taunt them before they are again captured and beaten (the Captain is now quite mad) and they all drown.

I point out these plot elements because I was left feeling unhappy about this film. The many beautifully shot, moody locations and occasional bouts of surreality (the inclusion of a clown as the demon’s ‘keeper’, for example) don’t detract from what is a pretty distasteful story that leaves a rather nasty taste in the mouth.