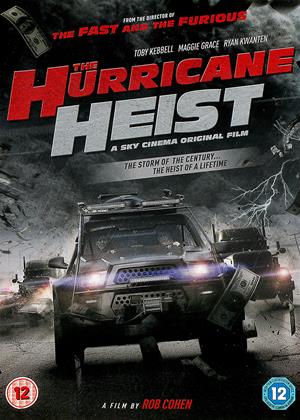 Reviews (1) of The Hurricane Heist

Daffy entertainment, not to be taken too seriously - The Hurricane Heist review by BG

You know what you're getting with this film; The Hurricane Heist lays its cards on the table with its 'Ronseal' name. It's an action movie about a heist during a hurricane, directed by Rob Cohen.

He's a guy you may have run across before - the director of a great many flashy but lightweight action movies with slightly barmy concepts, like Dragonheart (talking dragon teams up with Dragon-slayer), Stealth (talking smart-plane goes rogue), and his highest profile hit, The Fast and the Furious (talking Vin Diesel teams up with...you get the picture).

They're all films choc-full of likeable characters with paper-thin back stories, mildly forgettable villains, and enjoyable action that takes centre-stage and is often augmented by good effects/CGI.

This movie is the same.

'Will' ruins his older brother 'Breeze's (no, seriously) life as a kid by making it plain that a blatantly imminent bad event will be all his fault if it happens. Said bad event obviously happens. We jump to many years later, and Will (Toby Kebbell) is now a professional storm chaser and has basically been given a tank by the US Government. Breeze (Ryan Kwanten) is an alcoholic mechanic who they decided would be the best person to have on speed-dial for the local Treasury facility. Maggie Grace is 'Casey', the maverick but brilliant Treasury agent responsible for the $600 Million in used notes that has to sit in the Treasury until the hurricane has passed and the shredder is working again. (Seriously - you couldn't make this stuff up! Oh, wait, somebody did...)

Naturally the incredibly obvious Bad Guy decides he wants to rob the place, with the aid of another Incredibly Obvious Bad Guy and a pair of hackers. We know one is a hacker because he has a clipped English accent and a neck tattoo. We know his girlfriend is a hacker because she's alluring and has every accent in the world at some stage, but rarely for two consecutive scenes. It doesn't seem to matter. It's that kind of movie...

The drama hits the fan, hostages get taken, and Casey and Will end up running around town getting shot at during the worst storm on record, while bad guys get clouted by scenery, bullets, and over-elaborate escape plans.

Naturally for one of Cohen's movie, the effects are a lot of fun. They decide to eschew the normal look of an approaching hurricane (just lots of boring rain and mist whipped up by wind) and go for an ominous 'walls of clouds rushing across the ground' effect that would be more in keeping with something like the movie Twister crossed with the alien arrival scenes of Independence Day. It's daffy, but it works and it looks very dramatic. Similarly, while the plot and physics of the rest of the movie both beg a LOT of disbelief, the stunts and CGI remain exciting, and this ends up (like most of this guy's movies) just a little better than you expect.

If you're after an undemanding but exciting time and are happy to leave your expectations of realism and consistency at the door, try Hurricane Heist. You'll have a blast. (Sorry).

Director Rob Cohen of the legendary Fast and the Furious franchise is riding that relation high for his direction on The Hurricane Heist. I don’t blame him. The big box office draw of the franchise at this point, featuring all manner of crazy car stunts, could be a draw here as well. With the same director and similar font almost criminal in reference, the film comes pitched almost like a spin-off where fast criminals raid a vault and make an escape during a hurricane. It sounds fun but if Cohen really wanted this to be a picture that proceeded down a route fast and furious, he needed to juice up this insanity to a category five silly storm.

A team of bank robbers happens upon the perfect time for a heist. As a category 5 hurricane makes its way into Alabama, the thieves can easily pilfer a large stack of cash scheduled to be shredded with the storm covering any tracks leading back to them. What they didn’t count on were two brothers Will and Breeze Rutledge, boys brought together by pathos after their father was murdered by a hurricane when they were children. They won’t let themselves be killed by another category 5 and they certainly won’t be bested by some no-good robbers. But it’s a messier situation as they team up with Treasury agent Casey Corbyn to prevent the robbers from getting away. It turns out the local cops are also involved in splitting the cash as the plot thickens with backstabs aplenty.

It sounds like it could be a fun romp of do-gooders versus thieves versus nature. But what’s missing to bring that Fast and the Furious tone to fit the font is personality. This is a film so strict with keeping on track with its characters in their allegiances and action scenes that it forgets to give them actual character. Will and Breeze are boring brothers, their comradery too distant that any attempt at being playful feels awkward and forced. The terrorist style thieves of much weapons and tech are led by Ralph Ineson playing a corrupt Treasury employee, but he feels are too docile for a snarling villain you could tell is being held in a cage and neats to break free with viciousness. The most connection we see from any of these characters is when Will and Casey have a quiet scene to share their love of peanut butter and jelly sandwiches. Are we sure this script wasn’t written by a grade-schooler?

And stunts are surprisingly few and far between. Many are more entertaining in theory than practice. A perfect example can be seen where Casey and Will lead some of the gun-toting bad guys to a mall where they can use the storm to ambush them. They come up with the perfect solution to blow out the ceiling with harnesses holding them to the building and force their attackers into the storm. This leads to a ridiculous scene of Casey and Will flying around above the mall with tethers somehow holding them tight, bouncing around in the wind as debris flies at them. Of course, they survive and, yes, the computer graphics used for this sequence are ludicrously cheap. Not as fun as I’d thought it’d be. Nor was the climax that features a truck being crushed with its own trailer.

Everything about The Hurricane Heist seems to forecast a fury of tongue-in-cheek action but all that comes of it is a mild flurry of the mediocre. It needs to be more bombastic, silly, and exciting, not just a bland ballet of bullets and backstabs that amount to little more than a film so lost in its own staging it can’t be anything more than forgettable. You need more than a good idea to make a great movie and this is one glaring example of that concept.