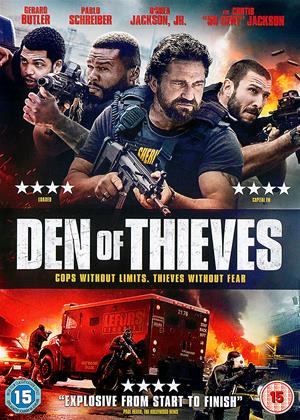 Reviews (6) of Den of Thieves

Certainly not the worst movie Gerard Butler has been involved in (think of the dreadful 'Geostorm'). The film is gritty, plot okay and acting even from Butler good although the bad boozy cop with domestic problems thing has been done many times usually just to fill the running time and no different here. The bank heist (Los Angeles Federal Reserve) is quite memorable although the film is let down at times with scenes that really don't need to be in it (e.g. Levoux's, played by 50 cent daughter scene), the climax shoot out in a traffic jam also questionable. Other than that watchable.

Other reviewers have mentioned the similarity to Michael Mann’s classic film ‘Heat’ but I’m surprised that Mann hasn’t sued the producers of this movie for copyright infringement. Both start with a security truck heist and end with a noisy shootout in the streets of LA. There’s also the grudging respect between boss thief and top cop with the latter struggling to keep his home life stable. Even the dialogue during the the bank robbery could have come from the Mann film, “We’re not here for you, we just want the money.”

I’m not saying it’s a waste of time watching (it kills a couple of hours) but it is very derivative.

After a thoroughly disappointing night out at the cinema watching Bumblebee (during which we both walked out less than half way through) we decided to give this one a go by chance at home because Gerard Butler was in it. Man, did this make up for earlier. We'd been watching for an hour and felt we'd already watched (and enjoyed) an entire film; the second hour was just as good. Fantastic character development that you feel connected to, gritty, good script and ending. What more can you want...this is what I call a film.

If you like films like "Heat' then youl like this. Some decent action shoot outs and original heist ideas. Better than i expected. Pretty good pace too.

Well-written, well-directed hard-bitten cops and robbers movie channelling the spirit of Michal Mann’s Heat, against which it loses nothing in comparison. Gerard Butler is in convincing form as the take-no-prisoners lead cop up against equally tough ex-Marine thief Pablo Schreiber. Gritty and immersive, supported by a perfectly judged insistent score, this is an intense, intelligent and involving movie. The cast spent two months at training boot-camp prior to shooting and it shows. You believe these guys. No dumb heroics here. This looks real.

The plot builds to a tense final act and gripping climax, with a fascinating dénouement it would be a spoiler to give away. It’s writer Christian Gudegast’s first film as director and he’s in total command of tone, cast and camera. Avoid the trailer and go with the flow. Den of Thieves nails it.

Even the DVD Extras deserve a mention. There’s a fun feature on boot camp and an excellent director’s commentary in which Gudegast, among other topics, explains how some of the shots were achieved. Take the brilliant opening shot: a seamless transition from helicopter to drone to Russian arm (look it up on YouTube).

There’s a moment in Den of Thieves where a quirky band of police officers banter about an early morning crime scene. They’re in store for a heist picture and it seems like they’re slowly waking up, the coffee just starting to kick in. They approach this scene as though they’ve done it a dozen times before, plucking donuts from the crime scene while they match gruff wits. This more or less defines the appeal of the film: a familiar ride we’ve been on dozens of times but seasoned enough to know what works well enough and what doesn’t.

Gerard Butler rolls into the picture as the gruff Detective Nick O'Brien, never underplaying his weary too-old-for-this charm while getting giddy to shoot up some bad guys. He lays in thick to this role where when questioning a bar owner for info he joking speaks about wanting to have sex with the male owner. Nick is part of the Major Crimes Unit, devoted to very unorthodox means of law enforcement, which essentially just gives the film a ticket to craziness. And after so many of these crime/heist pictures that play things so slow and understated to the point of boredom, it’s refreshing to see something from this tired genre with some life.

Nick’s team tracks down a suspect, Donnie (O'Shea Jackson Jr.), a bartender who is a bit uneasy. Being as intimidating as he is, Nick harasses Donnie into giving them info. And the Major Crimes Unit needs a lot to solve the crime of why a gang would steal an empty armored truck. In true anti-hero fashion, Nick makes his declaration of why Donnie should spill his guts for a room full of tough law enforcers not going by the book: “You’re not the bad guy. We are.” Kinda obvious, given that Nick has massive issues with his crumbling family life, but at least there’s no danger of misinterpretation here.

The gang soon learns of Nick and make themselves known, prepping a cat and mouse game of car chases, shootouts, and hostage situations. The gang is led by Marine veteran Ray Merrimen (Pablo Schreiber), committed to making sure his demands are met and that he’s one step ahead. It’s then up to Nick to be faster, louder and meaner to dash Merrimen’s scheme of making off with truckloads of money.

Den of Thieves has a lot of familiar scenes but always tries to put an extra level of grit, as though director Christian Gudegast ensures every bit of dialogue is spouted with gravel in teeth. Consider the scene where Merrimen holds up a bank and Nick is still fighting with a stuffier member of the law. When Merrimen’s demands are not agreed upon and a hostage is killed, Nick explodes on his feuding law enforcer, calling him all manner of profanity in his spitting rant. Of course, Nick will disobey direct orders and sling even more verbal assault before he readies himself to go in guns blazing with a nuts-to-this attitude towards handling crime properly. Again, nothing new with a law enforcer breaking the rules, but, again, he’s in a band that are more or less the bad guys.

Naturally, Den of Thieves is high on action to match its raging dialogue. Punches are thrown, guns are drawn, trucks smash into each other, and shootouts that happen in traffic are pretty intense. One may have seen these types of scenes staged better in previous action scenes. As an example, the climactic shootout in a traffic setting doesn’t feel as gritty as, say, the skill of Michael Mann’s Heat. But for doing its best to be as gritty as it can be, this picture or less delivers on a genre that has been in desperate need of a jolt.