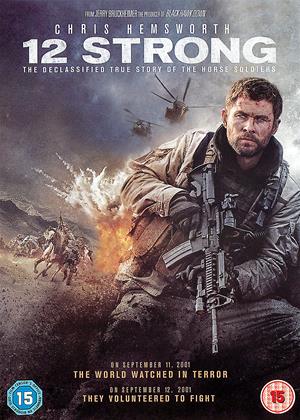 Not the greatest war film of all time ... - 12 Strong review by Schrödinger's Cake

I have no idea about the historical accuracy of this film, but I do know that I love a good war film when done well. I think this one started out ok: with enough time spent on back-stories to grow a little empathy with the characters. However, it quickly dissolved into the usual mess of stupid heroics, and dragged-out scenes of Rambo-esque ridiculousness.

Apparently, pretty true-to-life in many ways - 12 Strong review by CB

I wasn't sure of the extent to which the film was based on a true story. The end credits certainly link it very specifically to actual events. It has been fascinating reading up about it on historyvshollywood.com. Some names were changed in the film (so, for example, Mark Nutsch becomes Mitch Nelson), and although the final battle was dramatised to some extent (though there was a rocket launcher), it's worth hearing what the real-life soldiers said about the film. This is from the website above:

What do the real-life Horse Soldiers think of the movie?

"We think they got it, they got the spirit of the Special Forces team in the post-9/11 moment in American history," said team leader Mark Nutsch, portrayed by Chris Hemsworth in the movie. Despite the movie accurately capturing the soldiers on the ground in Afghanistan, the real-life heroes have said that the movie does take artistic liberties, adding drama and portraying certain events out of order. Nutsch said that the movie leaves out a key river that the men often had to swim across in the freezing cold water with their horses, one of the bigger obstacles they faced on the mission. -ABC News

Enjoyed this film very much, felt authentic to me. The facts at the end strongly suggested a strong basis in truth. If you like a good war / special forces feature - see it!

Entertaining film and if you like war/action films well worth a watch, the only problem with it it,s kinda been done before think of Rambo 3 and tanks v horses and you will know what I mean.

Chris hemsworseth is Thor without his hammer , but overall the acting is good , after watching this i cant understand why the USA did not clear out the Taliban and IS out of Afgan in six months , just like the John Wayne films of the 1940s&50s.

Most tales of Americans in war adapted for the big screen come with a perspective and a purpose. When Clint Eastwood tackled Chris Kyle in American Sniper, he directed a fascinating portrait of the mindset of the modern soldier. When Mel Gibson portrayed Desmond Doss in Hacksaw Ridge, he took a poignant observation on the nature of trying to save lives on the battlefield. But when the fairly-new Danish director Nicolai Fuglsig was given the declassified story of special forces in Afghanistan that bested a Taliban occupation, all I can see of Fuglsig’s intent was, “Hey, it’d be really cool if Chris Hemsworth road on a horse while shooting at terrorists.”

I don’t want to claim that this director is ill-suited for directing a picture about Americans, but his approach seems surprisingly distant from any personal examination. He mostly plays it safe with this material. The film begins with the events of September 11th. Pointed out to his daughter on television before school, Captain Mitch Nelson (Chris Hemsworth) answers the call, despite being relegated to desk duty after his team has been dissolved. He rounds up his not-so-old team, played by Michael Shannon and Michael Pena, to head straight into Afghanistan for one of the toughest assaults against the Taliban. They say their goodbyes, briefly, study up on the importance of their success, briefly, and then it’s a truckload of dry military procedure for the operation of teaming up with the Northern Alliance, complete with enough location titles, military lingo, and specifics on operations to please any Tom Clancy fan.

After a few airstrikes, the twelve American soldiers and the massive Northern Alliance army find themselves going up against rifles, tanks, and missile launchers. These moments of war are large in scale, but low in any impact past the grit of watching lots of bullets, explosions, and CGI blood flood the screen. There's even a guitar riff placed on the soundtrack just so that all this seems more extreme. In other words, it's a very Jerry Bruckheimer war picture, staged with all the clutered shots and blaring explosions. In between all of this is nothing-talk from the soldiers of either crackling forgettable jokes or talking up the importance of being a hero and seeing the fight until the end.

Neither the war stategy scenes or action sequences impressed much, mostly for how lacking in character such a story appears. I felt as though I had learned more about airstrikes than I did about any of these twelve soldiers. I know it's asking a lot to get to know this daring dozen, but even two or three would be enough. Instead we mostly get the trope-heavy dialogue of soldiers trying to sound brave on battlefield and giggly around civilians. That's par for the course of a standard action movie, but, I don't know, it seems rather impersonal for a story such as this. A handful of directors could give us big and exciting war scenes along with real military procedure; the best ones find something more than just a series of loud scenes.

Perhaps Nicolai Fuglsig was afraid of approaching such a story. Maybe he just wanted to make big, dumb action pictures and decided to use this tale as his springboard into the genre. Maybe he didn't want to try to explore the human aspect of these characters too deeply for fear of touching on the wrong traits. Maybe he wanted to stray from the conflicting politics of how the Taliban ended up with so much power. Whatever the reason, 12 Strong comes off as weak film for being so stand-offish from the American perspective of soldiers completing one of the most dangerous missions in record time. You don't even have to take my word for it. I saw this film at a preview screening with soldiers, veterans, and other servicemen in attendance. I can usually count on them to give an ovation to these true-story military dramas by clapping when the text epilogue finishes. Not a single clap for this film. I exited the theater and heard one veteran mutter that he thought the film was okay, but a little boring. Clearly this film missed the mark.