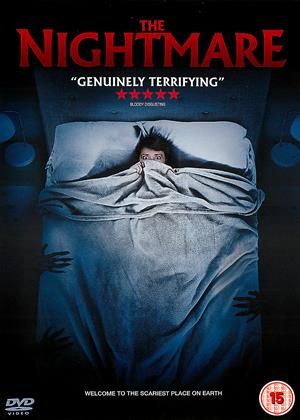 Synopsis:
Acclaimed director Rodney Ascher will take you into the minds of people who have experienced sleep paralysis through twisted and terrifying re-creations of their worst visions. "The Nightmare" explores the frightening reality of this phenomenon in a way no movie has before and takes horror to the next level - because this time, what you're watching is actually real.
Actors:
Siegfried Peters, Yatoya Toy, Elise Robson, Nicole Bosworth, Steven Yvette, Age Wilson
Directors:
Rodney Ascher
Producers:
Ross M. Dinerstein, Glen Zipper
Studio:
Altitude
Genres:
Documentary, Special Interest

Reviews (3) of The Nightmare

The best thing about this documentary feature is that it's a documentary, and therefore everything in it is real, subjectively at least. This is also its biggest problem. Since the main characters are real people just being themselves, they can't act, and they exhibit varying levels of screen charisma and coherence. In particular, somebody should have told the goofy hipster with the terrible goatee that if you already look and sound like Shaggy from "Scooby Doo", wearing two hats at once indoors does your credibility no favors!

Another slight difficulty is that other people's dreams are notoriously the most boring subject on earth, and large parts of this film consist of people telling you about their dreams, some of which sound more like vivid but perfectly ordinary dreams than sleep paralysis. We do get to at least partially see all the dreams and similar experiences we're told about, and some of these recreated nightmares are far more profoundly creepy than any fictional horror film. Then again, some of them are painfully low-budget, or represented by barely relevant stock footage (including a surprising number of inexplicable clips from an obscure 1950s B-movie about a giant space robot).

The director's previous feature, "Room 237", used an identically impartial approach. However, there he was dealing with very specific theories explained by people who'd had plenty of time to lick them into shape, mostly illustrated by clips from a very expensive film by Stanley Kubrick. Also, these theories were so clearly bonkers that no comments were necessary. Here, people who aren't necessarily all that articulate ramble on about a phenomenon which has profoundly affected their lives and which some of them believe to be objectively real, accompanied by visuals of extremely variable quality. It really could have done with a few other viewpoints. For example, the obvious similarity with alien abductions is mentioned, but all the director does with this is to show us a few brief clips from the movie of Whitley Streiber's "Communion", when what we need is an interview with someone who believes they're an alien abductee so that we can see how similar their experience is with the others.

Ultimately this is an unsatisfactory documentary which doesn't dig deep enough, partially saved by its sometimes genuinely terrifying and downright Surreal subject-matter, some of which is guaranteed to touch a nerve in almost anybody. It's got a fair bit of curiosity value so I'll go up to 3 stars, but I'd give it exactly 50% if half-stars were possible.

INTREGUING TRUE STORYS TOLD BY NORMAL PEOPLE ABOUT THE SLEEP PARAYLIS PHENOMENA. CREEPY,IT ONLY SINKS IN AFTER YOUY WATCH IT HOW FRIGHTNING IT MUST BE,HOW COMMON IT IS.

Sadly Cinema Paradiso didnt list this as a Documentary, they just listed it under Horror...so I wasnt expecting it to be soo Dull.

Not at all realistic seeing as they all come across as mad .mentally ill ,attention seeking or damaged.