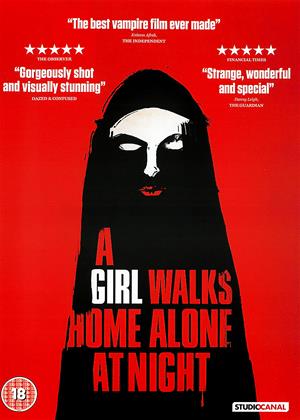 Rent other films like A Girl Walks Home Alone at Night

Reviews (7) of A Girl Walks Home Alone at Night

A skateboarding vampire. Do not be put off! - A Girl Walks Home Alone at Night review by NP

I can barely enthuse about this film enough. But then, I haven’t seen many black and white Iranian films featuring a skateboarding vampire – or any at all before this, in fact. There are many potentially humourous moments here (Arash coming home from a fancy dress party, dressed as Dracula, chatting up the unnamed girl – not knowing that she is a real vampire ; the constant inclusion of the family cat at moments of great intensity; the vampire girl professing a fondness for the music of Lionel Ritchie), but all of them played absolutely straight. The effect is therefore extremely successful.

The location is Bad City, wherein the lone vampire girl stalks the streets. Interestingly, her chador, a tool of female oppression, is used as the vampire's cape - an observation I wish I could lay claim to (it was revealed to me online). All is filmed lingeringly in stunning black and white, elevating each visual to something approaching art: cityscapes, barren waste-grounds visited by a lone stray dog, seedy lodgings, Arash’s father's heroine-induced nightmare – all evocative and sensual. Ana Lily Amirpour not only directed this with an obvious passion, but wrote it too, elevating this finished project from her 2011 short.

Music plays a large part in this film. Thankfully, it isn’t the standard grunge metal fare usually (and tiresomely) associated with horror, but the tracks selected actually succeed in complementing the mood. The cast in uniformly excellent, from the repellent pimp Saeed (Dominic Rains), ravaged Hossain (Marshall Manesh) to the likeable hero Arash (Arash Mirandi). It is Sheila Vand who takes the honours here though. Even in the many moments of silence, she is fragile, sinister and somehow tragic all at once. This is a hugely recommended film.

What a refreshing change! - A Girl Walks Home Alone at Night review by PR

This just has got to be the most novel interpretation of the standard love story! Tragi-comic but uplifting, interesting without resorting to convoluted plots, special effects or excessive action scenes (in fact, quite the opposite, if it weren't so good it would be a slow film). Even the background music - though not necessarily to my taste - is unusual, unpredictable and very appropriate. Just goes to show that there still are people out there who can make original films.

One of the most interesting aspects is that you can detect the feminine hand behind it; with the possible exception of Almodovar, I don't think a man could have made the same movie.

And you'll love the cat.

Strangely beguiling and even more strange seeing Elijah Wood was one of the executive producers in this Iranian movie. A movie with a difference plus an adorable moggie (who remains safe)! The male lead, Arash Marandi, presents as an Iranian James Dean with real acting potential but then all the cast are good. Not too grisly as in black and white, which well suits the movie. If you like something different, you'll enjoy this.

...and a show stealing cat actor. Could be Lynch at his best if it wasn't too subtle for a male directorial hand. Really really good if off track arthouse is you thing. And it really is mine.

This film has the look and feel of being made for thousands as opposed to millions, whilst simultaneously and paradoxically, having superb cinematography. Shot in black and white, which really suits the film noir feel, it is truly a work of art from this gifted, visionary director.

A female vampire stalks the lonely streets of Bad City in downtown Iran. Apart from the usual vampire antics, it is also a love story.

The pure magic of the images, caught in glorious black and white are ingrained in my brain. I salute Ana Lily Amirpour and will be checking out her newest film with great excitement. So thankful I've seen this extraordinary film.

basically "twilight" made in iranian language. there is nothing "horror" in this film. boring and waste of time.

Loved it! - A Girl Walks Home Alone at Night review by CW

Gosh this was marvelous. The other reviews were good at describing this heartbreakingly lovely movie. There were so many moments I loved. One I had to watch again is when our heroine is skating at night under a bridge, her long robe and scarf billowing out like a large predatory bird. I also highly recommend watching the extras. The deleted scenes showcased the extraordinary talent of the supporting actors. Scenes it must have been so hard to cut. The 3 best vampite movies - this one, Only Lovers Left Alive and Blood and Roses (Vadim, not released to dvd).

A Girl Walks Home Alone at Night is an original bit of filmmaking that defies all competition in its craft and originality. Where else would you see you an Iranian directed vampire story meshing film noir and horror with a western vibe? It’s as if director Ana Lily Amirpour took everything she loves about cinema and wove it together in a most unique tapestry of chills. Whereas most modern horror pictures seem to be struggling for a decent night of forgettable frights, here is a film that knows exactly how to creep under your skin with a stylish flair.

By day, the Iranian town of Bad City appears as a bright and desolate wasteland of vice and death. Kids skate around deserted concrete playgrounds and drug pushers semi-secretly go about their business. But as evening descends, Bad City becomes a shadowy feasting ground for the mute female vampire known only as The Girl (Sheila Vand). Dressed in her dark hijab and striped shirt, she prowls the night for those who are suitable for the sucking of blood. The Girl remains almost entirely silent during her quiet takedowns. A lecherous prostitute-seeker lures her back to his place where he attempts to sleep with her - right before she goes in for the kill. She later stops a boy skating late at night, threatening him to tell the truth about his morality less she bare fangs and pierce his neck. Her stalking and kills are unique in how slowly they play out. Even if you weren’t aware of her vampiric powers from the beginning, her mannerisms suggest something sinister in her intent. With the relatively low amount of cutting, her anticipation kept me on the edge of my seat.

Bound by loneliness, she seeks a romance with the rebel Arash (Arash Marandi). Living with his heroin-addicted father, the young man specializes in selling narcotics with his vintage car. A small child looks up to him and Arash gives him that cool grin of a cowboy to a youngster. He soon runs into the mysterious vampire girl after taking his own product at a Halloween party. The two end up alone at her place listening to music and very slowly begin to form a physical bond. Arash approaches her from behind and carefully embraces her. There’s plenty running through both their minds as they meet without words. Arash could back out and The Girl could suck his blood given his Dracula costume which may or may not be offensive to her kind. Neither back out of the embrace as they slowly realize there is some connection here.

For a film that takes place in a ghost town, A Girl Walks Home Alone at Night is overflowing with visual flair. Shooting in black and white provides a very memorable sense of noir the way The Girl appears almost entirely in inky black among the heavy shadows. Watching her move about through the alleys and streets appears as though she is more of a force than person. Her powers are limited for her environment which mostly involves quickly darting in front of or behind her victims without trace. She has a handful of sequences where she goes for the neck, but they’re skillfully edited with shifting speeds and interesting editing techniques. The vampire girl embodies an element of the monster that seems to have been lacking from vampiric movie saturation: mystery. She is mostly aloof as we try to discern what she desires and how far she is willing to go for her goals.

Similarly, the romance between Arash and The Girl is kept subtle at a slow burn. Soon after their record listening setting, they have a date outside a power plant where they exchange small words among hamburgers. Their love feels as real as their characters, set against the identifiable . It also helps that the characters around them feel as developed. Arash’s father is given a surprising amount of focus as a man haunted by his past and stuck in an awful place. The unlucky sex-seeker at the beginning of the movie has his own motivations beyond that of a cackling gangster. Everybody feels human and not just a bland interpretation or fodder for the blood-sucking monster myth.

A Girl Walks Home Alone at Night is the vampire love story you’ve been waiting for and didn’t know you wanted. There’s both a grace and creepiness to its stylish vision of an Iranian town bound in the spacious whites and the deepest blacks. It’s completely deserving of its claim to fame as the first romantic vampire western. There may be more of this cross-genre to follow in the future, but it’s doubtful that any will match such brilliance. What we’re seeing here is the birth of an exceptional filmmaker who knows how to make something poignant, beautiful and undeniably cool.