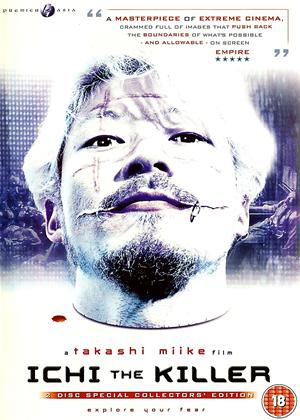 Reviews (3) of Ichi the Killer

When I first Began Watching This Film I had to wonder.. these Japanese Men Talking (not in sync as well) in British accents, I was wondering if this film was going to be any good.

But then the nasty things started and well at one point I had to actually look away (and I love all gore and nastyness!). Once You get used to the accents is very good, I found it to be a bit like Kill Bill 1 with all the blood and guts splattered everywhere, but with the accents thrown in, a bit like a British Gangster Film.

Ichi The Killer is probably one the most misogynistic, violently graphic and sadomasochistic films I have seen yet. In some ways this film could be considered absolutely deplorable; there are scenes of extreme torture, both men and women are horrifically beaten and killed, and the film is openly sexual. But where 'Ichi The Killer' grabs you is in identifying with the extraordinary characters. Kakihara, (really the main character within the film), is probably one of the best screen villains you'll ever see. He is quiet, yet delivers vengeance to others with no mercy, his sadomasochistic inner self lives for pain and is constantly looking for someone to take him to the next level of pain. The other main character is Ichi, a young socially immature man who suffers from past experiences of high school bullying. By manipulating Ichi's inner rage and hatred for all bullies, a member of the Yakuza has converted Ichi into the ultimate killer. The main storyline within the film revolves around the assassination of the head Yakuza boss, the search for his killer (who Kakihara believes is Ichi), the power struggle within the gangs to take his place, and the knowledge that somewhere along the line Kakihara and Ichi's paths will meet. If you can get past the bloodshed and violence, then Ichi The Killer is an enjoyable and visually startling film.

I turned off this film half way through. Because of the graphic blood-drenched violence? Nope - but just because I was yawning my head off. This is the kind of movie 12 year olds would like - and is I think based on a graphic novel, or perhaps a computer game. It has an adolescent need to shock - but, though gruesome, deliberately drawing out torture scenes for a teen audience, it is only cartoonish violence and horror - with buckets of tomato sauce blood sloshing everywhere. Personally, I found it dull as hell - with 2-D characters, boring torture set pieces etc. But then, I have always hated Tarantino too - esp dross like Inglorious Blah blah. If you liked that, you'd like this. Grown-ups, however, should avoid and leave this to the young teenies who think this kind of 'desperate to shock' gore is shocking or radical or naughty. It isn't any of those things really - it's just boring. But each to his own...