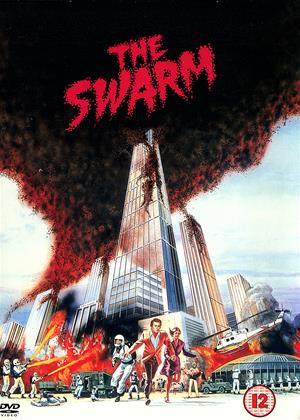 Reviews (2) of The Swarm

Irwin Allen was almost single-handedly responsible for the seventies disaster movie craze. In fact, Allen was so successful that by 1978 he was running out of halfway plausible disasters to make films about, and killer bees were the best he could think of. The trouble is, bees are not very scary. Obviously if millions of them chased you down the street they'd be scary, but that's not something you worry about unless you have a bee phobia, in which case you won't be renting this movie, will you? Now, wasps are scary. But if this film had been about killer wasps, Irwin Allen would have had to pay a bunch of stuntmen to be covered in live wasps, and there isn't enough money in the world for that! However, stuntmen will agree to be covered in live bees because... well, see what I mean?

Therefore the script has to constantly and monotonously remind us that these aren't nice, cuddly, useful little American bees, but horrid African bees that really do exist and really do kill people and everything, even if they look exactly like regular bees. Maybe if I was African I'd find this scary, but I'm not, and it don't. We also have to accept that these particular bees, in addition to forming an implausibly gigantic swarm for no apparent reason, also just happen to have suddenly become immune to all known insecticides, hyper-intelligent, and insanely aggressive towards, amongst other unlikely things, helicopters, trains, and nuclear power stations. Mind you, this is a film which starts with the world's foremost bee expert casually wandering into the control room of a nuclear missile base because he happened to be driving past and the gate was open, and discovering that, by an amazing coincidence, everyone's just been stung to death by a new kind of bee! Presumably they encouraged a chimpanzee to play with scrabble letters until they vaguely resembled a script. After this, it's almost believable that the US Army is too stupid to build a bee-proof command center in an area they know is about to be attacked by bees, and they have to find out by trial and error that it's not safe to use flame-throwers indoors.

During the long dull patches between increasingly unlikely bee-related catastrophes resulting in ever more massive explosions, the cast struggle to come up with yet another reason why the entire military might of the USA is powerless against insects with attitude, the guest stars randomly die in contrived ways somehow involving bees, and the extras try to appear threatened by what looks like (and quite likely is) superimposed footage of tea-leaves swirling in a fish-tank. A movie as spectacularly misconceived as this can't possibly have anything going for it other than unintentional humor, and that kind of accidental comedy quickly wears out its welcome. Roger Corman knew this very well, which is why his tightly-edited creature-features never exceeded 90 minutes. At a whopping two and a half hours, this sprawling, ponderous mess would have benefited from Corman ruthlessly amputating half of it. Sadly he didn't.

The Swarm - The Swarm review by ST

Like it or not...I still ponder, but being a big fan of Irwin Allen's previous outings such as THE TOWERING INFERNO and THE POSEIDON ADVENTURE, I approached this film cautiously given how bad a reputation it had for being a bad film. Undeniably it is for most part not a very good film, dialogue, characters and the overall premise (that being an imminent attack of killer bees which apparently was meant to be something of a true prediction) are badly realized. Much of the film consists of cast members shouting at each other when at odds, specifically Michael Caine and Richard Wydmark, the other cast members (mostly the older character actors such as Olivia de Havilland and Ben Johnson) fare a little better in scenes where the action switches to the small town where the killer bees attack, but that's about as good as it gets.

By the time this film came out in 1978 I think it was the kind of film that people in general turned away from in light of other types of films which were superior in quality in the genre of escapist entertainment, that being said, if you have a soft spot (as I do) for what is characterized at the concept of "its so bad its good" in film terms then you may find some joy amidst all the faults, to a small extent I did, in the meanwhile I will revisit the likes of POSEIDON and INFERNO as better exmples of the Irwin Allen brand of entertainment.