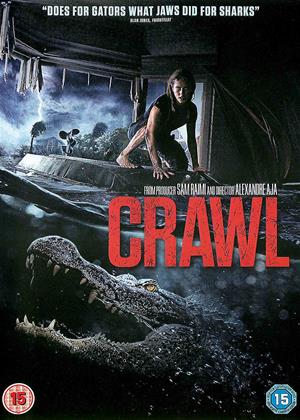 Father and daughter are stuck in the crawl space beneath a Florida house in a hurricane and alligators are circling. From that simple premise the story develops into a tense, exciting, full-blown action movie. Director Alex Aja films with his usual style and relish on a Serbian set that stands in for Florida so well you’ll never spot the difference.

From early claustrophobic shocks in the crawl space the action opens out and ramps up to a rousing climax, with plenty of jumps and laughs along the way. It may not be a film that would ever trouble the Oscars, but what more do you want from a creature feature? The DVD also contains a fascinating 30min Making Of feature that shows how the hurricane and floods were achieved and what the actors had to go through for our vicarious pleasure.

Not sure what some reviewers problem is with having a strong female character in an action/horror creature feature, probably says more about them! This is actually quite good fun, a nice short running time with some shocks and fun death scenes. Actually manages to spend most of the time in one basement and keep it reasonably tense. If you enjoyed Shallows, another effective cheaper creature feature, then give this a go.

Don't usually watch these sort of films, as seen these sort of things on syfy and they are trash. Had higher hopes for this film from some reviews, but it was painful. So boring, I wanted the key characters to die really on, but that would have finished the film really early. Although that would have been a godsend.

This movie was SO boring - I was prepared to give it a go, but honestly, the more it plodded on the more tedious it got.

A typically #MeToo absurd story line - the lead is a 'strong and independent' woman and conveniently a wonderful swimmer - because of course no alligator could possible swim as fast as such a strong and empowered girlpower star. Yawn.

Very boring compared to some great disaster monster movies, like the Jurassic Park series (all of them) or some shark movies.

The CGI alligators are OK . That is the only good thing I can say.

"does for gators what Jaws did for sharks"

Erm - no! not in the slightest - Jaws is an excellent movie, this is not

Silly lazy plot about a daughter rescuing her dad beneath a crawl space below his house that he's decided to do some maintenance on with an impending category 5 hurricane bearing down knowing the possibility of the worlds biggest and most agile alligators could be lurking. Cue other people dying quite rapidly other than the 2 main characters (1 which is the known actor Barry Pepper, what's he doing in this?)...a crawl space which fills quickly with rainwater that seemed at first no higher than 5 feet but then with feet to spare above their heads still is easily enough for Haley (the daughter) to swim in, by the way she's an aspiring swimmer not making the grade (you know how the film will end up). Great escapes ensue from the mouths of the gators with just flesh wounds (chuckle) and the father missing an arm and that after being given mouth to mouth and eventually a copter coming in to save them in a hurricane (chuckle). Sorry for all the spoilers but the above just touches on how bad this film is!

For a disaster film involving flooding and alligators, ‘Crawl’ does exactly as it says on the tin. Luckily for the viewer, Director Alexandre Aja and his cast and crew ensure that the resultant ride is every bit as spectacular as it could possibly be.

Apparently this is based on a true story. That would be quite a loose adaption, I’m thinking, because the characters of Hayley and her father Dave (impressively lunged Kaya Scodelario and Barry Pepper) go through absolute turmoil that might well have ended the lives of those not lucky enough to be on the silver screen: some critics have criticised ‘Crawl’ for the fantastical nature of its plentiful near-death moments. My opinion is that, although a straighter take on the story maybe more sympathetic factually speaking, it wouldn’t be as thrilling as this – after all – it is a drama, not a documentary.

I enjoyed every single moment. The characters are introduced well and given a relevant back story. The alligators seem to be a mix of real creatures and CGI, but I couldn’t tell the difference, and the images of savage flooding are faultlessly created. My score is 9 out of 10.