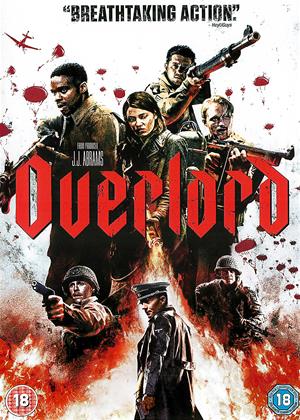 What's good about this film is that it's a fairly honest and graphic account of the true horrors of war. However we start off with a host of American Bombers full of Yanks attempting to liberate German occupied France, with the historically false premise that it was the Americans who saved Europe and won the War for us all (sic)! Then what follows is a well made slick, stylish and quite violent action war movie. The acting and direction are top notch as is the cinematography and the cast appear to work well together, the storyline, whilst not original, moves along quite nicely. Then towards the end we are introduced to the not quite Zombie element of the film but why this works so well is that it isn't a Zombie movie in the true sense, it more about experimentation and the horrors of war and isn't cheap or tacky like some horror movies can be. It's got quite a nice European feel to it, rather than the usual over the top American style you usually see, so all in a really great movie. However right at the end, we are treated to yet another nauseatingly false fact that under the command of General Eisenhower, the Yanks once agains saved and liberated Europe (sic), the fact is the Americans were far too busy profiting from the war and dealing with the Japanese at this point to have had much of an involvement by then! However what really ruins it is watching the extras, where the actors are so busy patting each other on the back and telling you how fantastic they all are, instead of talking about the film, it made me want to positively retch, it was that nauseating to watch!

To enjoy a piece of drama or a film, an audience has to engage in the WILLING SUSPENSION OF DISBELIEF. That is possible also in a fantasy setting - HOWEVER the characters MUST still be believable, in what they say and do AND what they look liks.

The idea that there were happy clap mixed black and white crews on US airplanes in 1945 for the Normandy landings is PURE fantasy - this was a time when racial segregation still existed in the southern states of the US and NO WAY would whites take orders from a black sergeant. This is NOT Viet Nam or the Gulf War. Watch SAVING PRIVATE RYAN to see how it really looked, or DUNKIRK.

The young pretty main character is not only black though - to tick those Hollywood diversity boxes - he is also totally unrealistic as he is PERFECT in every day. Like a black GI Mary Poppins circa 1945. He is so totally moral and perfect and always right he should have a halo. That makes that character absurd and means the suspension of disbelief is jarred.

This is overlong too with endless fight scenes and make-up/CGI for the kids; BUT it's nothing more than a B-movie with a daft plot and lots of gore. No better than WEREWOLVES OF THE THIRD REICH or other low budget stuff.

One star. It'd be 2 or even 2.5 if the pc diversity casting hadn't ruined it.

The film begins with a bunch of US paras involved in the invasion of Europe in 1944. The chaotic scenes aboard the plane during aerial bombardment are brilliantly realised and the excitement continues on the ground as our band of brothers fight for survival. The fact that Germans and French speak in their own languages rather than in accented English adds to the sense of realism.

Then it’s all change. You’ll know from previews and promotions that there’s something very strange going on the Nazi compound, and this is where the film gets much less interesting. We’re soon into genre horror elements with the standard gross-out shock-horror tropes. The upshot? What could have been a brilliant war film turns into an unpalatable horror film. It’s supposed to be fun, but only irredeemable horror fans will find it so. It ends with a great tracking shot that shows what the film could have been. Pity.

It sent me to sleep - Overlord review by KW

Quite what happened I do not know but my partner had to wake me up, so interesting was it I had fallen asleep and when I tried to rewatch I could understand the initial impact it had on me. Could have been so much better with a tighter script and a director who was prepared to run a very tight ship!

The reanimated dead didn't move fast until the turn of the 21st Century, prior to that they moved slowly whilst groaning or saying stuff like "brains". Totally unrealistic and spoilt the the film.

Must have missed something in the description account of the feature film which started in a very detailed paratrooper nightmare to match the opening of Saving Private Ryan seat gripping intensity but it fell short of feasible finally. More gore than war

the State of modern film making at its poorest, no story/character arc, sure each scene was well lit, cameras made all the right moves, however, it was all one tempo, films need buildups, stalls, tension, resolution, this film lacked these things.

Im not a fan of low budget Nazi in space/zombie films,but...... - Overlord review by MA

this is great,dont be fooled.its not cheap,the CGI is really good,the scenery is well used.the acting is good and the story line works,

its proper gory with lots of excellent real physical effects. I noticed JJ Abrams in as producer in the credits and the director and cast do a great job.

Yeah, war film turned horror but OK to watch all the same. Fantastic beginnings and then kind of slips down hill from there but no to bad really. shame as it had potential until the Nazi Zombies kicked in, still has the usual kick ass, love, torment, blood and guts pretty much a bit of something for everyone. Just lacks the Tarantino touch really.

Although I enjoyed the film, it was not quite the fun that was promised in the trailer. At least two thirds of the story is a war film, and quite effective one at that. Those waiting for the horror element may feel a bit shortchanged and when it occurs it's not the most original. I do like the mixing up of the genres and this still as its moments.

Overlord is by far the best Nazi zombie I’ve ever seen. Okay, so that might not be the biggest bar to cross but consider how everything could’ve gone wacky with this picture and that the result is a film with a tongue firmly in cheek. It takes itself seriously with a gritty, gory, and intense edge to create a film with a convincing warzone and a terrifying dungeon of inhuman experiments. The blending of the brutality of war and monsters creates the WWII horror picture I never knew I wanted.

For the first half of the film, Overlord plays itself straight as a war picture. We come to know a company of American paratroopers on the eve of D-Day, tasked with taking down a German radio tower. The few who survive the explosive ride down include the fearful Private Boyce (Jovan Adepo) and the bloodthirsty Cpl. Ford (Wyatt Russell). They drop into a French village and try to keep a low profile, especially after over half their landing troops were slaughtered upon arrival. Boyce wants to maintain stealth and a commitment to doing right, while Ford can’t help himself from using a captured Nazi as a punching bag. The Nazis they are fighting are the ruthless kind, their hobbies including gunning down civilians in the streets and raping women when they’re all alone.

Up to the point where Boyce secretly breaks into the tower, it’s a gritty and engaging war movie. But then Boyce discovers the Nazi’s secret lab of hideous and frightening experiments and the film takes on a different sort of grit. The Nazi experiments are genuinely gross and creepy, showcasing mutated men and women that have had parts removed, including arms and spines, still kept alive and begging for death. Nazi Captain Wafner (Pilou Asbæk) will be one of the first to try out the latest serum that grants the ability of super strength and to regrow skin. Sure comes in handy after you’ve been shot in the face and bloody skin is hanging off your jaw.

Part of what makes Overlord so much fun is that there doesn’t feel like there’s an insistence to be winking at the camera. Nazi zombie romps tend to be pretty goofy but director Julius Avery keeps everything on the straight and narrow while still being action packed. The opening sequence of exploding planes is just as frightening and epic as the scene where a zombified Wafner brutalizes soldiers. The film still has its fun but doesn’t add extra jokes. You don’t need a lot of extra nudging to fully enjoy when Mathilde Ollivier goes from fearful French villager to flamethrower wielding warrior and incinerator of monsters.

I was impressed with how a film such as this manages to find a meat and potatoes vibe to its tale of war and horror, throwbacks and originality, camp and earnest. It’s almost subtle in how much it holds back from going full-on grindhouse giddy with its violence, holding back most of the nasty gore until the ultimate smackdown of American versus Nazi. That being said, it doesn’t waste a single blow towards its climax which goes the extra mile to make the action more brutal than cartoonish. And for that the film is able to be a fun romp without spoon-feeding the absurdity of it all to the audience. Overlord has set a very high bar for the Nazi zombie subgenre, small though it may be.