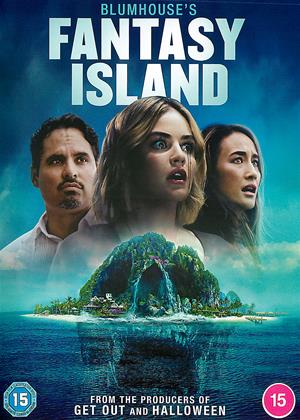 This film seems to have bad ratings across the net and indeed at first it came across pretty naff.

But this is one of those rare films that just keeps getting better - even the very last moments of the film had me gripped.

It keeps throwing twists at you and what started (well for me) as just a bunch of annoying characters i wanted to switch off - by the end you have investment in each of them.

There does seem to be quite a few glaring errors through the film (such as a girl who's facial makeup changes scene to scene or a soldier who walks off without his rifle) but as the film progressed and given its nature I was left wondering if id missed something and there was some reason for such odd things.

I really enjoyed this film and have no shame in giving it 4 stars.

On a tropical island a group of annoying guests have their fantasies magically come true… but be careful what you wish for. It’s complete nonsense but it does get better as it bowls along, with dollops of thriller, action, humour and light horror. If you’re in an undemanding mood, it’s silly enough to be watchable with picturesque Fiji locations and unexpected plot twists to keep things entertaining.

Fantasy Island is directed by Jeff Wadlow, the man behind Blumhouse's 'Truth or Dare'. Just like that film, this is a movie with a pretty cast and a fun idea where the execution doesn't live up to the potential.

Michael Pena is fun (and unusually serious) in his role as the Manager of the Fantasy Island resort, where a handful of guests have been invited to experience their dreams coming true for free, in return for the hope of glowing online reviews.

The guests include Austin Stowell as the designated 'hunk' character with daddy-issues, Maggie Q as a solemn but sensitive woman with self-esteem problems, Lucy Hale as a loner with a biting tongue, and Jimmy O Yang and Ryan Hansen as partying brothers. Parisa Fitz-Henley plays 'Julia', the resort hostess.

From the offset, the concept is enjoyably wacky: each guest will be granted their own fantasy based on a personality questionnaire they had to complete before arrival. The island, we are told, 'knows' what they want, and magic seems to be involved...and to the astonishment of the guests, soon some of the fantasies are unfolding in ways that seem far too extraordinary to be a gimmick. But naturally there is a sting in the tail.

The initial fantasies are handled well. Without getting into spoiler territory I'll simply reveal that revenge, heartache, loss and debauchery all get addressed in inventive and enjoyable ways. The fantasies of the brothers are perhaps the most surprisingly handled: one brother is revealed as gay, and nubile male partiers are provided to mirror the nubile female ones fawning over his brother. At the same time, one reveller is allowed to impart some wisdom and life advice to the shallow brothers in a nicely unexpected departure from the norm for this genre.

Unfortunately, that's largely where the surprises end. The suspicion that something is awry infects the fantasies, and soon our guests are fighting for their lives against a variety of threats.

This is very much in Blumhouse's 'party horror' vein, not a serious chiller. Fantasy Island doesn't really want to turn stomachs or freak people out; it's all about being able to put on the kind of film you could watch with your mates and see pretty people running around getting panicky. A little blood is shed, and there is some menace and threat, but it's very much diet-coke level for anyone remotely 'into' their horror films, and nothing truly shocking ever happens. The minute-by-minute plot is relentlessly predictable (although credit should be given for a clever bit of misdirection about what's really going on), some of the motivations and actions are trite and daft, and there appears to be a heavy nod to the old TV series at the end. It's pretty, and an enjoyable way to kill time, but it's very far from scary. Horror-lite.

A good fim,full of twists and turns. Annoying characters. Not original plot,but still watachable. I enjoyed most of it,but not all. Worth hiring,but not to see at cinema when they re- open.

Based loosely on the 70s TV series, Fantasy Island is a highly entertaining piece of utter nonsence but it's not trying to hide the fact that is exactly what it's meant to be. It really doesn't deserve the reviews it garnered from the so called critics. Grab your mates, get the beers in and above all.....ENJOY.

Not sure what the other reviewers are on about but this film is terrible. You may have heard its rubbish. It is. You may think its a fun re hash of the 70's series. Its not. I dont know where to start with this. None of it makes sense or is grounded in reality or logic. There isnt even any horror, comedy action or suspense. Just no....