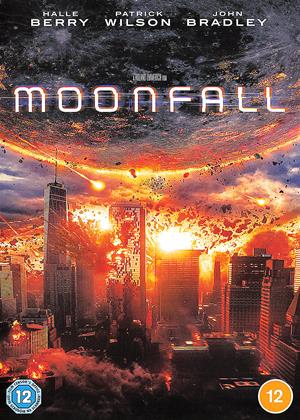 Synopsis:
In Roland Emmerich's 'Moonfall', a mysterious force knocks the Moon from its orbit around Earth and sends it hurtling on a collision course with life as we know it. With mere weeks before impact and the world on the brink of annihilation, NASA executive and former astronaut Jo Fowler (Halle Berry) is convinced she has the key to saving us all - but only one astronaut from her past, Brian Harper (Patrick Wilson), and a conspiracy theorist, KC Houseman (John Bradley), believe her. The unlikely heroes will mount an impossible last-ditch mission into space, only to find out that our Moon is not what we think it is.
Actors:
Halle Berry, Patrick Wilson, John Bradley, Charlie Plummer, Wenwen Yu, Michael Peña, Carolina Bartczak, Zayn Maloney, Ava Weiss, Hazel Nugent, Chris Sandiford, Jonathan Silver, Eme Ikwuakor, Stephen Bogaert, Maxim Roy, Ryan Bommarito, Kathleen Fee, Donald Sutherland, Frank Schorpion, Sebastian Pigott
Directors:
Roland Emmerich
Producers:
Roland Emmerich, Harald Kloser
Writers:
Roland Emmerich, Harald Kloser, Spenser Cohen
Studio:
Entertainment In Video
Genres:
Action & Adventure, Sci-Fi & Fantasy

I would never expect anything too cerebral from a director like Roland Emmerich, and I know that he'll deliver on visuals and spectacle, but this film about the moon heading for the Earth is unbelievably crass. It's like a bad episode from TVs Space 1999, where the premise there was that the moon broke from orbit and went outwards in the other direction. Yes, I suppose you can say that it's so bad that it's entertaining, and you can have a good laugh at the stupidity on display, but you may also cry with disappointment at how big budget SF has sunk to this.

The moon’s out of orbit and is approaching earth. If you thought it was made of cheese you’re wrong. It’s a hollow manufactured object. It’s the script that’s cheesy. By-the-numbers plotting, clichéd backstories, dialogue that will make you squirm… this load of nonsense has the lot. The hero even has a comic sidekick. Roland Emmerich is a dab hand at disaster movies, but this one’s a real mess that gets sillier and sillier as it progresses. Best line: “This doesn’t make any sense, Brian!” A one-star film despite a large budget and tons of cgi pixels swarming around the screen. Plus an extra star because it’s so inept it keeps you watching in disbelief.

Entertaining with great cgi .but vrry cheesy dialogue ..reminiscent of 1970's disaster movies but it held my attention for the 2 hours

Moonfall is the most delightful of dumb disaster movies. It doesn’t so much try to ground itself inaccurate science or compelling arcs so much as it slaps all the familiar tropes with a massive dose of camp. It’s not just a dumb disaster movie but perhaps THE dumb disaster movie of Roland Emmerich’s career. Sure, he will probably be more revered for the nostalgia of Independence Day and maybe even his goofiness in The Day After Tomorrow. But for a film where a space shuttle flies into a moon’s butthole to stop it from crashing on Earth, there’s something so bafflingly beautiful about this chaotic picture that is so unapologetically bad that I find myself unapologetically loving its absurdity.

Honestly, was anyone expecting anything more than spectacle with such a premise? The moon mysteriously falls out of its orbit and is due to crash into the Earth. With humanity in a panic, the only way to stop this end of the planet is if a trio of unlikely heroes can prevent total armageddon. This team includes the disgraced astronaut Brian Harper (Patrick Wilson), a man who swears he saw an alien lifeform kill his co-worker on a previous space mission. His other astronaut team member, Jo (Halle Berry), didn’t see the alien and isn’t sure if she believes him. However, as NASA’s deputy director, she can’t ignore or stand idle while the moon threat looms. Then there’s the conspiracy theorist of KC Houseman (John Bradley), the geeky dork who incredibly eager to prove his crackpot theory of the moon being a mega-structure correct.

The characters have all the familiar Emmerich trimmings. Failed marriages, troubled teens, innocent kids, overbearing step-parents, elders wanting to be proud, etc. Emmerich does seem smart enough to figure that we’ll all be searching for these absurdities on a bingo card and just unloads them one after the other in rapid succession. The dialogue is uproarious as well. Whenever KC is spouting exposition about the moon, he’s endlessly ranting about how mega-structures are cool and definitely real because he keeps saying that term over and over. Jo makes constant calls to her ex-husband of a military official to both hold off the nukes and protects her child.

Even while the world is ending, Brian still manages to find time to bail his rebellious son out of prison and keep him safe, even having the foresight to know his kid will need a gun during their run for cover and that he’ll know how to use it. Spoilers: He does and will use that gun on some crazed bandits who somehow know that the oxygen will run out in their corner of the planet and that they need more. This leads to one of the most laughable bits of dialogue where one of the bandits dies during a car chase while the other remarks “Forget him! All that matters is that OXYGEN!”

The special effects are about as big and overblown as you’d expect for a sci-fi disaster epic. Space shuttles take off underwater! Flooding waters engulf cities. Skyscrapers go flying into the sky and land in other parts of the country (“Isn’t the Chrysler Building in New York?”). Gravity will shift and send cars floating. Explosions come about as chunks of the moon start hitting the planet. And I don’t think any amount of detail could explain the detailed inners of the moon and its grand sci-fi twist. I don’t think I could even convey how much I was rolling on the floor laughing at such a reveal, especially when the twist of aliens and technology is delivered by a child.

Roland Emmerich has outdone himself this time by making of his most hilariously over-the-top disaster pictures to date. It’s a bad movie with warped logic about the Earth, some lackluster performances, and writing that is riddled with issues and left-field reveals. It also features one of the groan-inducing endorsements of Elon Musk you will ever see in a movie. Even with those issues, it’s still a film that manages to be so unbelievably bad that I ended up loving the whole experience.