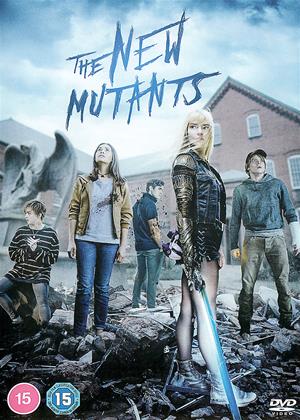 Reviews (5) of The New Mutants

Had potential - The New Mutants review by TH

This film felt like it didnt know what it wanted to be. There was real potential for this to be an interesting film and I liked the dark horror elements but it kind of held back from being a superhero film and held back on horror and clearly held back on likeable characters.

The ingredients are there and hopefully someone can revive this idea and make it 100 times better.

Shame it took so long to come out. Not the worst xmen film I've seen, I'll give it that. A little more like Logan rather than any of the main xmen films, thank god. It did have some promise, but felt like too many hands had been involved in it. Would have been nice to see where future films would have gone, but we're not going to be seeing that. Shame.

Could have been really good - The New Mutants review by PC

Its quite clear that the original idea that Marvel meets horror has gone through several rewrites as they lost faith in that premise. This is a shame as it has some good moments before going for an all out special effects finale. There are some good young actors involved and with a better script may have stood a chance. This may have been a really good hybrid but comes across as an opportunity missed.

Generally, we thought this was a good film with our favourites, Arya from Game of Thrones; Beth Harmon from Queen's Gambit; and Jonathan Byers from Stranger Things! The story was decent, but somehow felt a bit disjointed in parts, as if the characters didn't really gel together. There seemed to be a bit of a plot fail as well - why could Dani Moonstar overcome her fear (the spirit bear) when the others seemingly couldn't? Overall, I would recommend this but perhaps not very highly.

Pleasantly fun, but feels like it's heavily aimed at the teen market - The New Mutants review by BG

Josh Boone's 'The New Mutants' is a film that's been through the wringer in terms of delays and rumours. However, Boone alleged upon release that the finished article was the film he had always intended. If so, it's an odd choice - because for the first X-Men/Marvel character universe 'horror' movie, he's chosen to make a film that's part superhero-adventure, part Twilight-feeling teen-romance & teen issues movie, and the tiniest smidgen of inoffensive and not remotely scary 'horror'. The threat level is somewhere around 'Ghostbusters'.

The story is also muddled. Blu Hunt plays hero 'Dani'. Unfortunately she's not given a particularly well-written character and her powers are skirted around/not particularly fleshed out until a climax that seems both nonsensical and contradictory.

Maisie Williams is the MVP here, showing a breadth of range and nuance that is fresh and exciting, as a shy mutant who bonds with newcomer Dani. Much has been made of Anya Taylor-Joy's performance as 'Illyana Rasputin', but for us she felt too stagey and over-the-top (although she does get some awesome powers, a sidekick that's funny and terrific in equal measure, and probably the most twisted back-story).

Charlie Heaton from 'Stranger Things' does a great job as 'Sam', pulling off a heck of a drawl, but again his character never really goes anywhere, and probably worst served of all is Henry Zaga as rich boy 'Roberto'. He gets very little character development, his powers stay undisclosed for much of the movie, and when they do come out, the climax sidelines him so fast that you wonder why he bothered showing up.

It's clearly a movie that has suffered much re-writing and interference, if only for the fact that a couple of characters' powers come across as overlapping, due to poor writing, poor editing or both. It's never adequately explained why some of the characters claim they 'can't' use their powers during crucial life-or-death moments, leaving us to assume that it's purely for script convenience, or why some of them are considered so dangerous and yet seem almost completely pointless in a fight.

There are heavy-handed hints at nefarious goings-on and a name/logo that fans of the comic books might get a lot more out of, but which are so poorly fleshed-out in the film that it feels as if they're holding back info in the hope of a sequel: - always a bad policy in this day & age of franchise false-starts.

The effects are sometimes fun, and the character interplay is spiky and enjoyable, but this feels like a 'my first horror movie' aimed at the audience range of 10-15.

The New Mutants was a film that had been locked in production hell for three years, lost in Disney deciding what to do after they had acquired Fox and subsequently their stake in Marvel. It’s pretty clear from the film that it came about after the success of 2017’s Logan which took comic book properties in a more R-rated direction. It was a telling sign that spoke from the box office to the studios in the words that “hey, Marvel movies can make money when they stray from PG-13 territory.” I bring this up because New Mutants directly references the likes of Logan more than once as a pale reminder of what a film with a firmer tone can look like.

At first, there’s a primary focus on the character of Dani. She’s a tragic figure plagued by the pathos of her family being lost in a storm, ending up at a special location for treating mutants. Her powers are feared to be dangerous and she’s kept under the watchful eyes of the carefully probing Doctor Reyes. While there, she meets other mutants also struggling with their powers. Rahne can transform into a wolf, Sam is essentially a human rocket, Bobby can harness solar energy to make himself a human flame, and Rasputin can not only harness a magical sword but can open a portal to purgatory. All of them are dealing with similar horrors from their past, some with their powers accidentally kill others and others where they were abused and violated by others.

By that brief description, it would sound like this is the Marvel equal of Nightmare on Elm Street 3, especially with the picture’s leaning towards horror. That’s a great idea for a different kind of superhero story to set itself apart from the myriad of samey comic book movies but, similar to Fox’s tinkering with 2015’s Fantastic Four, it never reaches such heights. The entire first act is a dry slog of exposition. Few characters show emotion, despite being portrayed as sly rebels and sexually seeking teens. They only speak in dialogue most bland of explaining their powers and where they come from. After such tiring treads, the film does get a bit interesting when Dani’s powers reveal that she can tap into other people’s fears and make them manifest in reality, leading to some truly terrifying scenes.

From there, it would seem obvious where this picture would go, right? Each character would conquer their pasts and become more confident with their powers. This seems to only happen for Dani and in the weirdest way. It’s not that the finale of all the characters fighting a giant magical bear couldn’t work, but the lacking in bringing arcs to a head really makes the film feel as though it’s being sedated back into the typical superhero antics that such a psychological sort of film shouldn’t retreat towards so cowardly.

It’s rather astounding how New Mutants wastes its potential at every turn. Bobby has fears of burning people after he roasted his previous girlfriend alive and it would seem as though some romance between him and Rasputin would help him get over this. Not to mention Rasputin might be able to better get over her hideous past of being raped by adults by finding genuine intimacy in someone who cares about this. None of this comes to pass. All the characters essentially put their troubles behind them to help Dani fight a bear. So little of these characters is explored that even the tender romance between Rahne and Dani feels unearned for how little room it gives them to breathe and delight in each other.

It’s easy to understand why The New Mutants was shelved for so long because so little of it ever works. The comradery is so forced with dry exchanges that it’s not the least bit chummy to warrant the brief one-liner bits the film is going for. The connections to X-Men are so loose with such a contained story that it’s almost pointless to rip the footage from Logan for the played-out connected universe Easter egg. The New Mutants could work but it’s far too sedated in safety to ever be anything less than a mess of Marvel machinations.