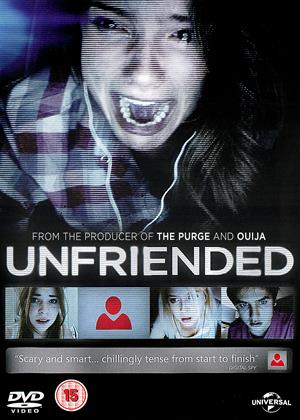 Synopsis:
From the producers of 'The Purge' and 'Ouija' and the director of 'Wanted' comes an original thriller where a seemingly innocent prank starts a sequence of events that spirals out of control. 'Unfriended' unfolds over a teenager's computer screen as she and her friends are stalked by an unseen figure who seeks vengeance for a shaming video that led a vicious bully to kill herself. On the anniversary of the shocking suicide, the very same friends who thought there would be no consequences to their actions will find out just how deadly wrong they are.
Actors:
Heather Sossaman, Matthew Bohrer, Courtney Halverson, Shelley Hennig, Moses Storm, Renee Olstead, William Peltz, Jacob Wysocki, Mickey River, Cal Barnes, Christa Hartsock, Konstantin Khabenskiy, Anthony Eftimeo, Tony Hernandez, Denis Lyons
Directors:
Levan Gabriadze
Producers:
Timur Bekmambetov, Nelson Greaves
Writers:
Nelson Greaves
Studio:
Universal Pictures
Genres:
Horror, Thrillers

It's a brave attempt to set up the whole film as a 'Skype' scenario and in a way, it could have been really good, but it's not.

We know why these events are occuring, but there is no explanation as to how. Lazy and frustrating. There is no real beginning, middle and end, it's just there really.

If I set up the review with a synopsis, I'm giving it away. I just can't be bothered. The only thing I care about here is warning others not to waste their time and enjoy a good horror.

All played out as if in actual time Chatting on Skype and via email/text .

Visuals are pretty poor as all is kept in small thumbnails or wider view snapchat windows to keep to the real time element.

Bullying storyline seems a bit weak as the girl involved only seemed to have ONE moment in her life shamed online briefly ,unlike Most Cyber Bullying where it involves the Victims entire being ,physically ,mentally and their private life being degraded publicly, this one seems a popular girl that got embarrassed enough by One single incident after getting drunk to Kill Herself ....To be honest if she was really THAT Shallow why do we care ?

Years ago, there was a creepypasta (internet slang for urban legend) about the YouTube channel 666. Open the page and a bloody video plays on the profile page. Refresh the page and the page appears bloody. The user tries to navigate away from the site, but they are redirected back. The user tries to close the browser, but it will not do so. They try to force quit the application, but it will not go away. The screen grows bloodier and bloodier until you’re eventually murdered by a hand or something. This story is presented as a decent video that is sort of fun to follow as a campfire story - not scary, but fun to believe that it’s real. However, nothing that visually clever appears in Unfriended - a story about a ghost haunting a Skype group. The most you’ll get is a teenager freaking out that they can’t find the forward button.

The concept of Unfriended isn’t terribly original for taking place entirely within a computer interface. Open Windows did a far better job at staging the idea with more intricacies in developing its story. Unfriended is much smaller in budget as a group of five friends gab over Skype and sometimes open Google and Facebook. But I suppose some kudos should be given to the filmmakers actually using real brands instead of making up fakes ones to get around licensing fees. It might seem like shameless product placement, but it helps establish a world in which teenagers are familiar with. It’s a bit harder to get into a movie when characters are connecting over Zkype and using Boogle to look up information about Fasebook.

Five ordinary teenagers congregate via Skype after the horrific suicide of their friend Laura Barns. A video was shot and posted of her passed out at a party with evacuated bowels. The shame of being laughed at leads to her shooting herself which was, of course, caught on camera to be posted on LiveLeak. Seeking revenge as a ghost, Laura updates the spook tactics to attack people online. She brings five terrible teens together who egged on her demise to humiliate their identities online. Scandalous pictures are posted, affairs are uncovered and eventually each one of them are murdered. The deaths aren’t all that clever - mostly involving an appliance of some sort. They’re only mildly terrifying in how they’re presented through choppy video chats.

There’s a nastiness to the world of social media showcased within Unfriended’s story. None of the characters are likable - all of them are despicable people from beginning to end. We’re introduced to a couple at the beginning of the film in which the girl performs a striptease after being turned on by her boyfriend ordering her with a knife. Not exactly the best build-up considering the slaughter begins right after that scene. Even the revenge-seeking victim of Laura is disgusting given how she stoops down to their level. If you were a ghost and had all these powers to haunt those who wronged you, why would your scare technique involve removing browser buttons and disabling force quit on applications? Even ghost teenagers spend too much time on their computers.

I wish there were a reason to care about anybody in this picture as there’s a decent flow to the unraveling of the tale. I enjoyed how the picture was able to show multitasking between browsers, chat applications, local files and social networks. Director Levan Gabriadze does a solid of mounting the details as the truth behind Laura’s demise reveals itself piece by piece, victim by victim. This is why it’s such a shame that all this coordination is in service of a worse version of I Know What You Did Last Summer.

Unfriended is unlikable, unimpressive and uninvolving. At the end of the day, all the movie has to offer is its computer desktop gimmick which is masterfully crafted, but mostly wasted in a picture of characters with souls so ugly you don’t care who lives or dies. It could have been a unique perspective on cyberbullying and the destructive nature of social media that teenagers charge directly towards. But all you’ll get is another dopey teen horror with a social media flavor. I did get a few laughs out of the boogieman aspect towards computers. Even for how much the movie gets right technically, it’s still a hoot in that most of the scares involve opening programs and sending spooky Facebook messages. If nothing else, it’s perfectly built for scaring the device-obsessed youth in which a program that locks up makes their skin crawl.